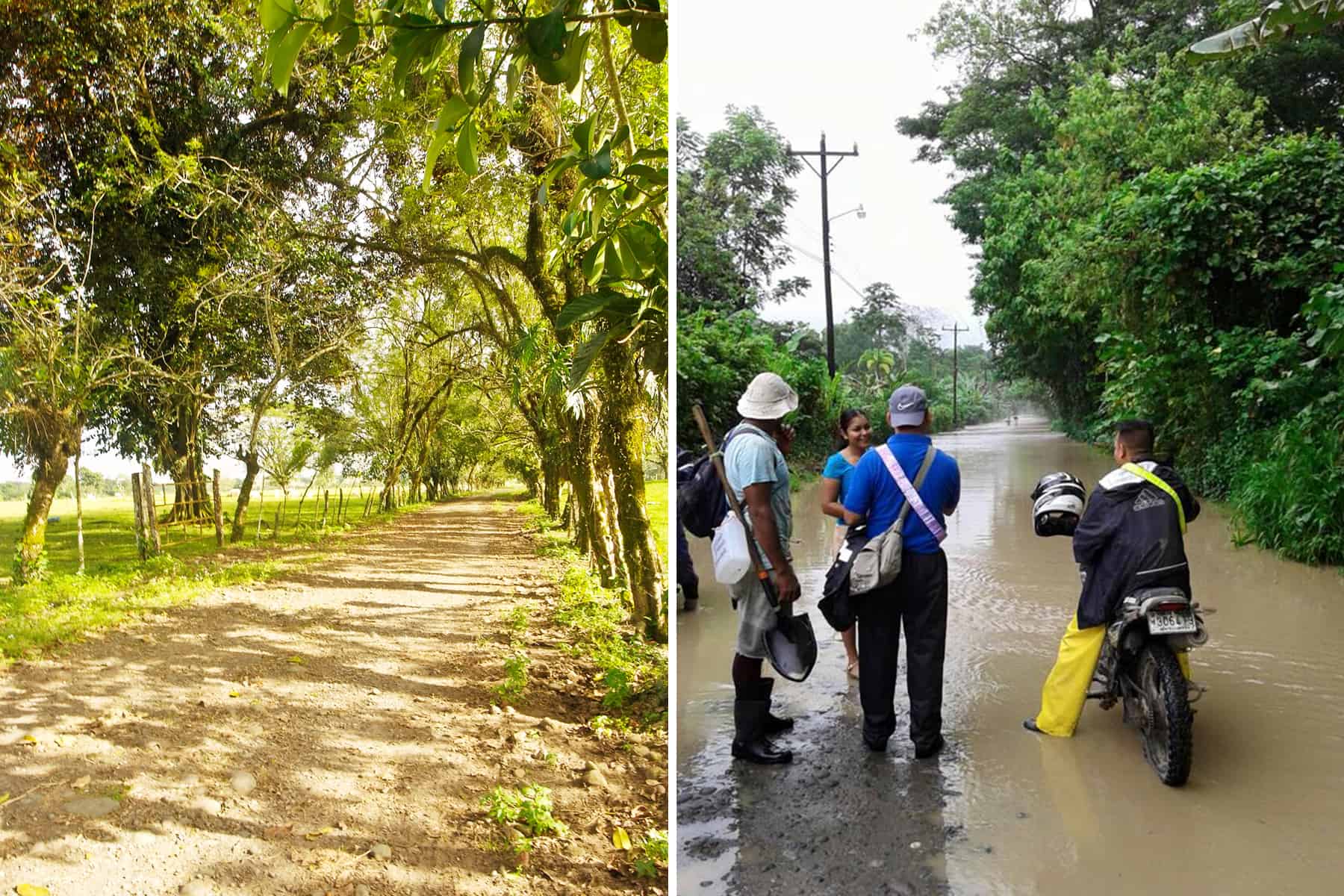 The National Meteorological Institute says the effects of El Niño in coming months likely will continue causing drought in the Northern Pacific region and severe rains in the Caribbean and northern regions. ((Courtesy of MAG and Red Cross))

The National Meteorological Institute recently announced that additional severe weather is in store for Costa Rica in coming months, caused by the ongoing effects of El Niño, which has yet to reach its peak in the country.

IMN meteorologist Luis Fernando Alvarado said that despite doubts expressed by some observers, extensive evidence shows that changes in rainfall patterns and spikes in temperatures are indeed linked to El Niño, which is responsible for extreme weather conditions that cause both floods and drought.

“Some people doubt news reports about floods or droughts that are attributed to El Niño,” Alvarado said. “They think those changes are the result of climate change, but the fact is that the effects of El Niño usually overlap with those of climate change, and that is the reason some people believe it is all the same.”

“Sometimes the effects of both events coincide and cause higher temperatures across most of the planet. Historical temperature measurements of the atmosphere and ocean currents indicate that both climate change and El Niño are real and are independent of each other. At times when they coincide they obviously produce higher temperatures in general,” Alvarado added.

El Niño originates from the interaction of temperatures of sea surface waters and the atmosphere in the tropical Pacific. Unusually warm temperatures are indicative of El Niño, according to the U.S. National Oceanic and Atmospheric Administration (NOAA). For reasons still not well understood, every 2-5 years the tropical Pacific warms for six to 18 months.

El Niño has been identified as the main cause of droughts in South America, Indonesia and Australia, heavy flooding in Peru and Ecuador, harsh winters in Europe, unusual monsoons in East Asia and hurricanes in the Caribbean.

What about Costa Rica?

Alvarado said climatologists in the last 50 years have noticed that local temperatures during every El Niño event are higher than those recorded during the previous one.

The current El Niño is still growing, and its effects on temperatures in Costa Rica will peak in December. Temperatures then will gradually begin to decline through approximately mid-2016, according to IMN forecasts.

Higher temperatures during the next dry season (2015-2016) likely will cause a shorter rainy season, which in Costa Rica usually runs from May to November.

IMN projections show temperatures during the next dry season are expected to reach – and even surpass – record highs recorded in 2010.

“Currently some areas in the Northern Hemisphere already are experiencing the effects of higher than usual temperatures, mostly because they are in the summer season. But temperatures in Costa Rica have not yet reached the expected highs,” Alvarado said.

“We have noticed that every time we register a peak in drought conditions, just like the current one, low rainfall levels not only affect Guanacaste but also areas of the Central and South Pacific. We recently received reports of completely dry rivers and springs in areas such as Quepos, and these situations usually do not occur during milder El Niño events,” he added.

The Environment Ministry’s National Commission on Forest Fires (CONIFOR) currently is in contact with IMN experts to outline a plan to step up precautionary measures and prepare media campaigns ahead of a possible spike in wildfires.

A CONIFOR report in May stated that from Jan. 1 to May 13, firefighters responded to a total of 83 wildfires that destroyed over 2,800 hectares. During the same period in 2014, the agency reported 58 wildfires and just over 1,500 hectares destroyed.

Agriculture and Livestock Minister Luis Felipe Arauz in June said he expected the effects of both drought and excessive rainfall in coming months to be similar to those seen last year.

Low rainfall levels in 2014 caused ₡14 billion ($25 million) in losses for the agricultural sector and affected about 5,000 families, according to the National Emergency Commission.

“The outlook for the sector in general is not positive for this year, either,” Arauz said. “Agricultural export figures likely will decrease.”

Agriculture and Livestock Ministry officials last Saturday announced they will move forward with a project known as Piedras reservoir, in Bagaces, Guanacaste. The project includes the flooding of 900 hectares of land with 500 million cubic meters of water a year, diverted from both Arenal Lake and the Tempisque River.

Alvarado believes that the Agriculture Ministry’s measures are logical, but officials might be forced also to recommend farmers in Guanacaste to change their projected times for growing and harvesting, particularly for rice crops.

He noted that rains registered in recent weeks that led to flooding in the Caribbean and Northern regions were caused by the effects of at least three tropical waves affecting rainfall patterns in those areas.

“These recent showers are not a guarantee that there will be enough rainfall to supply drinking water for the next dry season,” he said.

The IMN also forecasts that El Niño will affect rain levels in the Caribbean region. Rainfall levels will begin to decrease starting in August, and are expected to increase again in November and December. Rains are expected to come at normal levels during September and October, usually the months of greater precipitation.

“We are not anticipating any unusual increase in rainfall due to the effects of El Niño in the Caribbean, although it will cause scattered showers that will alternate with several consecutive dry days. People should not interpret that to mean the El Niño effects are gone when showers return following several dry days,” Alvarado said.

The Intergovernmental Panel on Climate Change identified Costa Rica as one of the hotspots where weather conditions will change the country’s current landscape in the next 50 years.