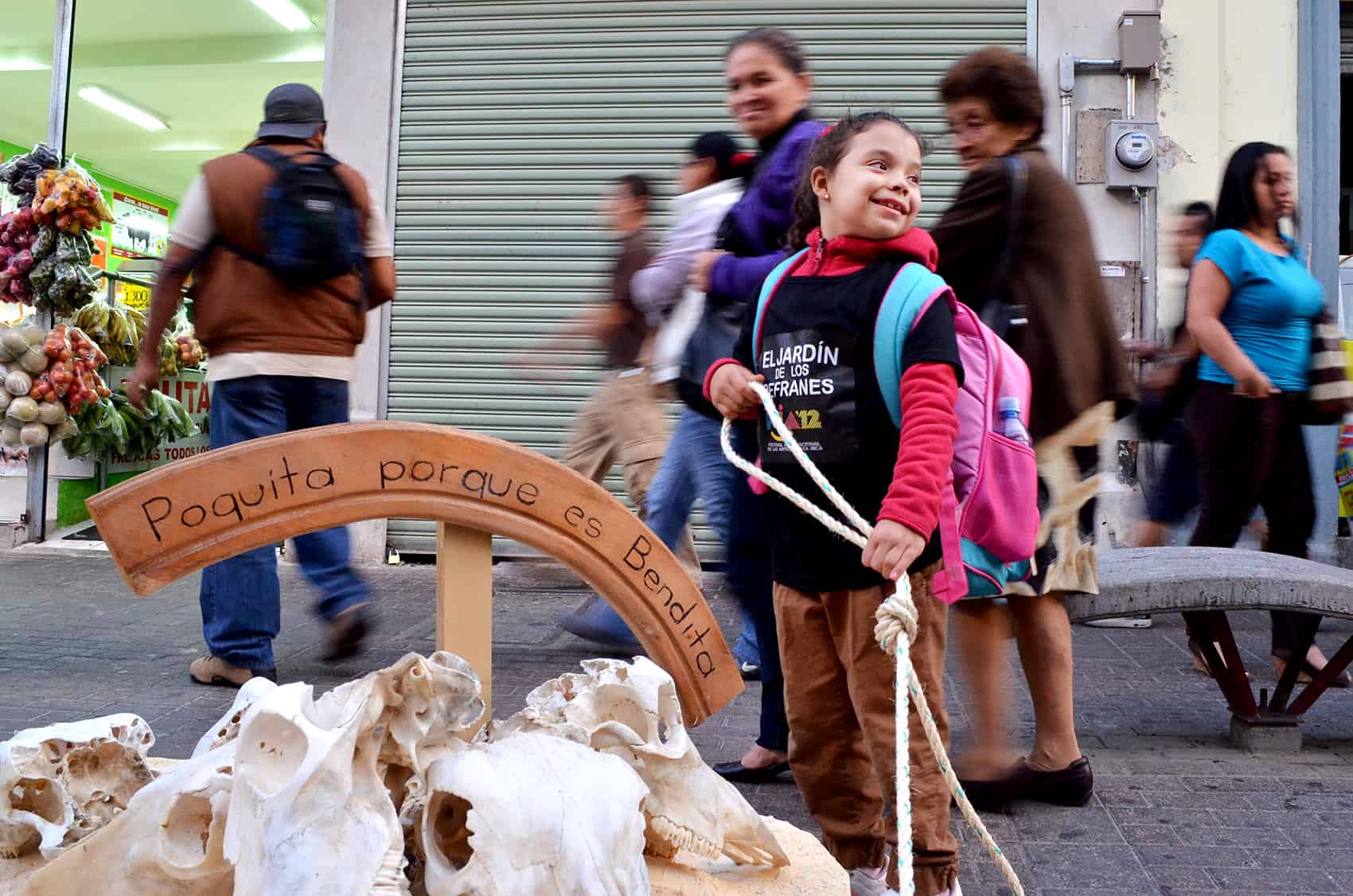 A young girl poses next to a display at a festival of "dichos," or sayings, in San José's Central Park in December 2013. The display urges people to conserve water with a dicho that roughly translates to "less is blessed." (Alberto Font/The Tico Times)

People who visit Costa Rica love many different things about it – its commitment to peace, its empty beaches, the epic kindness of its people, the way an Imperial tastes with ice, salt and lime. On my first pass through, I was drawn to those things, too, but after 10 years what I love the most about this country is the way it talks.

I love the poetry of its slang, so specific and complex that it can vary from one small neighborhood to the next, just like San José’s quirky microclimates. I love its endless repertoire of dichos, the folk sayings that are always at the ready on the tongues of my coworkers and friends to bemuse, reassure or instruct me. I love the way that anyone, from a taxi driver to a president, takes pride and pleasure in being the first to initiate a wide-eyed foreigner into a new turn of phrase, the way I imagine the French might unveil a cherished wine or an Italian her mother’s finest dish. Every country in the world has its own sayings and expressions, and I’m certainly no expert on that subject, but I have got to believe that Costa Rica’s are among the most colorful, numerous and hilarious. I also think it’s safe to say that Costa Ricans are much more conscious of, and proud to share, their sayings than many other peoples in the world.

As my time in Costa Rica has ticked by and my initial infatuation with the country has been replaced by a more nuanced understanding of its considerable warts and flaws, this nation’s love for a good play on words has remained a bright spot on the rainiest day. And in November in Costa Rica, that’s pretty damned rainy, güevón.

I might even say that the way Costa Rica talks – and thinks – has changed my life. To paraphrase a quote that has been attributed to Lao Tsu, Gandhi and Margaret Thatcher, a motley crew if ever there was one: Watch your thoughts, because your thoughts become words, and words become deeds. I believe it also goes the other way. The words we hear over and over come to influence the way we think. And what have I heard over and over during the past 10 years, primarily from my husband? When I’m stressed, tenga paz. When I’m struggling to accept something, a lo hecho pecho. When I’m grateful for a kindness, me extraña. (And when I’m overtired and loopy, bueeeeeno, le dió el ramalazo de las ocho.) These turns of phrase have softened my edges, slowed my breathing, stiffened my upper lip and shifted my attitude in a pretty permanent way.

That’s what I hope to capture here. That is to say, my primary goal is not to explain the country’s dichos y refranes, since many readers are much more familiar with them than I am. Also, the country’s language patterns have already been explored by authors such as Carlos Arauz and María Mayla Padilla, whose work I will cite frequently here. No, my goal here is simply to hold up these gems as a reflection of the culture that created them, and as an excuse to ponder this weird, wonderful and beloved country.

I hope you’ll join me every other Monday; write to me at kstanley@ticotimes.net with your favorite costarriqueñismos, suggestions or questions; and forgive me my many limitations as a non-native speaker of Spanish and, of course, of pachuco, Costa Rican slang that I believe rivals rhyming Cockney for complexity and interest. I may erroneously present as Costa Rican an expression that is common in, or endemic to, other Spanish-speaking countries, and I will almost certainly make mistakes in explaining and translating. When I do, please let me know. After all, as the saying goes – and this one is not uniquely Costa Rican, as I understand it – aunque el mono se vista de seda, mono se queda. Even a monkey dressed in silk is still a monkey, and a gringa is a gringa no matter how many chicharrones she’s eaten. (A metric ton, by the way.) See you next time.

Katherine Stanley Obando is The Tico Times’ arts and entertainment editor. She also is a freelance writer, translator, former teacher and academic director of JumpStart Costa Rica. She lives in San José. Portions of this piece were previously published on her blog, “The Dictionary of You,” where she writes about Costa Rican language and culture, and raising a child abroad.