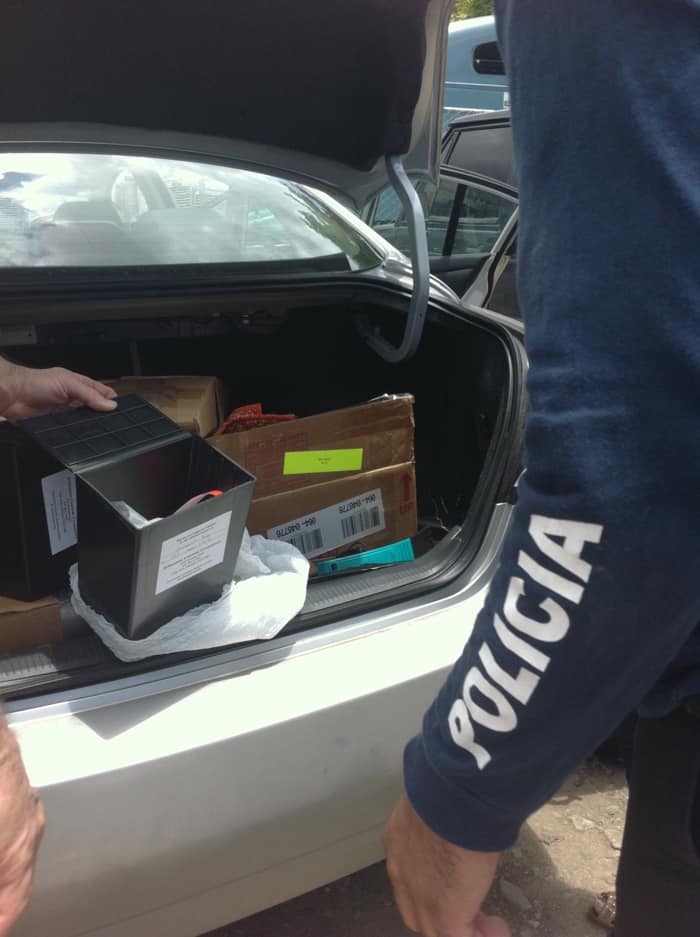 SAN JOSE — How many Costa Rican border cops does it take to inspect two urns containing the ashes of your mother and father?

Seven, it turns out.

My father, Jerry Kahler, died last July and donated his body to the University of Arkansas medical school, which did what it does with cadavers and then cremated his body.

My mother, Margaret Berg, was found dead in her home three weeks ago, on Saturday, May 23. Paul and I, shocked senseless, flew up from Costa Rica first thing Monday the 25th. By a freakish coincidence, three days later both sets of remains from the Arkansas Central Crematory were delivered to Mom’s house, on Thursday, May 28, which would have been Dad’s 80th birthday. Our family of four was weirdly reunited, and Paul and I held the urns and posed for pictures on our mother’s couch in Camden.

We decided to drive Mom’s car to Costa Rica, and Paul packed the car carefully, placing the two temporary black ash containers in a white plastic bag on the side of the trunk.

There the Costa Rican border police at Peñas Blancas found them today. “What’s in that?” the man searching our trunk asked.

“Son las cenizas de nuestros padres,” Paul said. Those are the ashes of our parents.

“Both?” The guard raised his eyebrows sympathetically. But he and his compañera, who meticulously searched every box and suitcase in our trunk (finding towels, paintings, a greasy pan and even kitchen spices, in other words a very Arkansas trunk), said they would have to check with their supervisors.

We waited — something we did a lot of in the sun in the two and a half hours it took us to cross from Nicaragua into Costa Rica. It was by far our longest border crossing, of six (though less stressful and expensive than crossing from El Salvador into Honduras).

I mentioned to Paul and our excellent border fixer, Gabriel, that I had the death certificates for both our parents. Because I’m freaking organized. I brought a folder from Costa Rica called “Legal Documents,” and it had Dad’s death certificate in it. And we both knew where Mom’s was.

The two officers came back with two higher-ranking officers in charge of drug control, as well as a woman from the health department who strapped on white plastic gloves, and two low-ranking but well-armed cops who stood in the background and said nothing.

Gabriel told the man in charge that I had death certificates for both parents, and he urged me to fetch them. I did, and I handed them to the jefe of this investigation. He told us he was here for drug control, and he asked us to open the trunk and take out the ashes. I had the keys, so I opened the trunk, and Paul muscled big boxes aside and pulled out the urns and set them down.

I touched the two urns, reading from the labels, and said, “Mamá y Papá.”

The top cop stared at the two Arkansas death certificates, both issued within the past 11 months in the same blue, official format, and compared them to the labels on the urns. The names and dates matched. If Paul and I were drug smugglers, we were also apparently pretty good counterfeiters.

The guy asked Paul to open the first urn, which contained Dad. I had sealed it with tape because the lid tended to pop open. Paul cut the tape with a key I handed him. Inside was a strong, clear, sealed plastic bag of gray ashes with the consistency of coarse sand. Paul took it out and handed it to the cop, who squeezed it with his fingers, ascertaining its consistency (definitely not cocaine) and confirming that there were no large objects hidden inside.

The officer asked Paul to take Mom out of her urn. Paul obliged, and with both bags in the open it was remarkable how much larger Dad’s was than Mom’s. Dad was 6 feet tall, Mom was 5’3″.

The 10 of us stood around in the sun for 15 minutes while the evidence was evaluated. There was no suggestion that there was a “problema” and somebody needed 20 bucks. These cops were conducting a serious investigation. Gabriel told me that last year someone trying to bring human ashes into the country was detained and had to appear before a judge and prove that this was his parent’s remains. But that guy didn’t have a death certificate, Gabriel said, and we had two.

The woman who had first searched our car touched the edge of the plastic bag of ashes and said, “Maybe we should X-ray them.”

Nobody replied. The whole process was weirdly silent, if not ghoulish. Finally the man stood up and handed the death certificates back to me.

Mom and Dad had passed the drug test.

We gave Gabriel $40 and he was happy. And he earned it.

And with one slip of paper handed over at the exit in the rain, we were inside Costa Rica, free and clear, legal and legit.

What left to do but drive five hours home to San José, capping off a journey of 3,000 miles?

We had no problems this whole trip, gracias a Dios, more significant than a border shakedown between El Salvador and Honduras. Predictions on Facebook that we would be robbed, raped or murdered came to naught, and in fact 99 percent of the people we met were friendly, helpful, responsible, living life well and treating others right.

A few people have written to me saying they’re considering driving from the U.S. to Costa Rica. My advice: Full speed ahead. If you have a good reason to want to do it, just do it.

On the other hand, if you have no experience driving in foreign countries, you speak zero Spanish and you have nobody to go with you, think twice.

Word to the wise: Driving in Central America is dangerous because driving anywhere is dangerous. You’re far more likely to die in a traffic accident than get kidnapped by the Gulf Cartel or beheaded by the Zetas.

I’m glad I did this trip, and I’m glad it’s over. There are some things in life you only have to do once. And I think I just did one.

When Paul and I were little and Mom and Dad were young, they moved us every year or every two years to a new place — Arkansas, California, Venezuela, British Columbia, Mexico, Alaska and Bolivia. Dad, a director of private schools in foreign countries, had a huge case of wanderlust. Mom, an outstanding schoolteacher, did not, but she tolerated the moves to keep our family together.

Now her journey has ended, and so has mine. And you know what?

Mom and Dad are sitting right in front of me on the big round table in the house I share with Paul, who is sitting on the other side of the table typing on his laptop, a mirror image of me.

Our family is together again.

It’s good to be home.