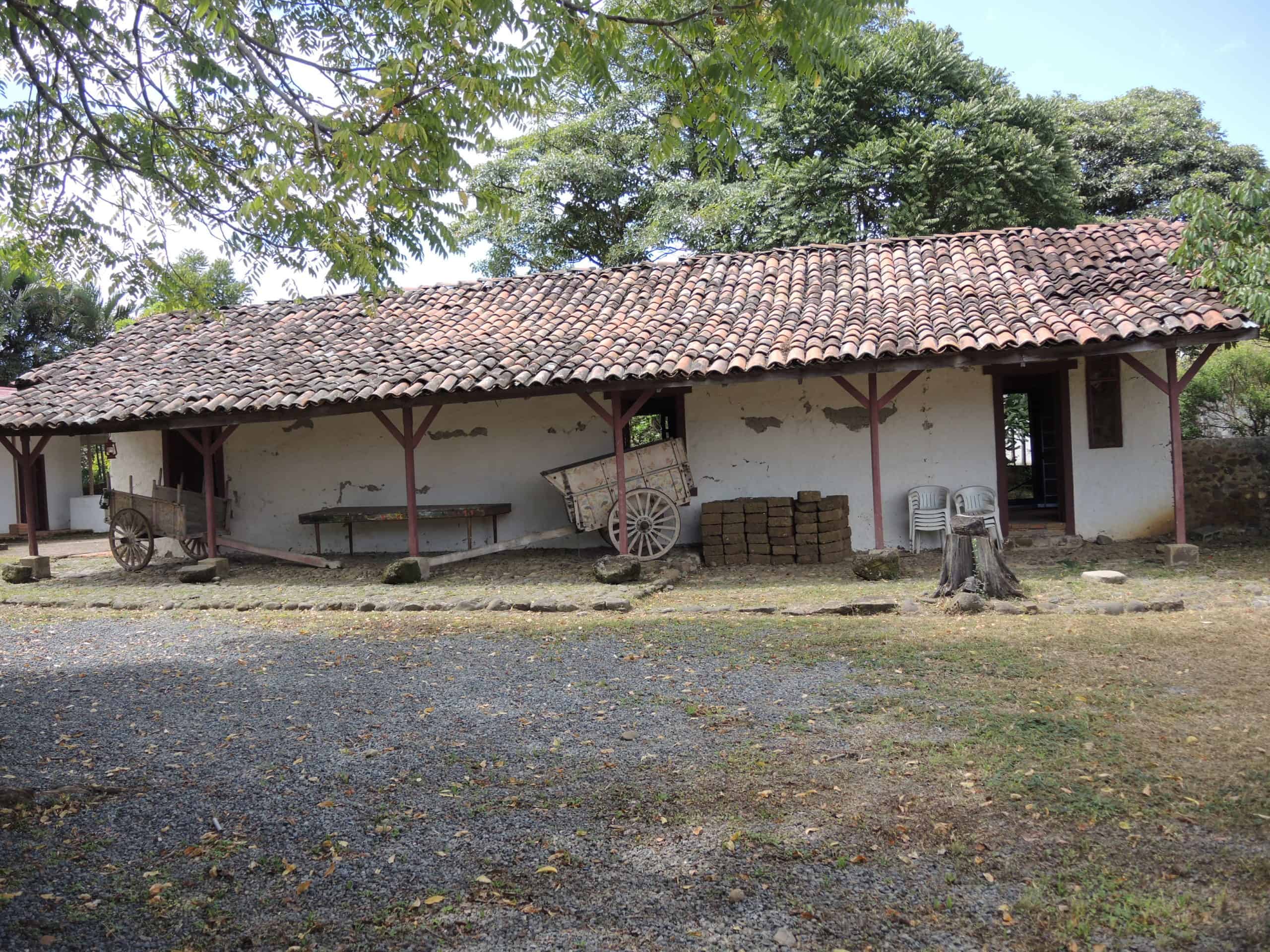 Welcome to the home of Jose Maria Castro, Costa Rica’s first head of state and two-time president, and his wife Pacifica Fernandez who also has a place in history for designing the national flag.

Their house, made of adobe back in 1850 is located in Salitral de Desamparados, just blocks from the central park and church. It is now a museum open for visitors.

The house, still in the restoration phase, was once the center of a huge coffee estate called Hacienda Salitral, owned by Fernandez’s father. It is now part of the city of Desamparados but maintains an area of about a block to include plants and outdoor areas common to the 19th century. The museum is dedicated to the ox cart, now a national symbol, and the peones who labored in agriculture.

It’s also a study of the architecture spanning the 19th century. Two other houses share the site. The main house is made of adobe but there is a house of bajareque, and another of wood. Cut away displays show how they were made and we see how mud, yes, mud, affected living in a Costa Rican rainy season.

It was a building material for adobe and bajareque, and the ox carts’ solid wood wheels allowed the mud to slide right off making travel on muddy roads possible. Mile long caravans of ox carts, laden with coffee, plodded their way to Puntarenas to waiting ships and brought back imported goods for homes such as the ones on display.

Painted oxcarts are now part of the nation’s patrimony and several are on display. Hailyn Monge, the museum’s director, explained that the colors and designs differed for different regions. “Carts from Sarchi had bold colors and designs while those from Heredia had simpler designs and lighter colors. Guanacaste carts were not painted.”

Carts of different styles are on display and Monge plans to have a “cart parking lot” with the aquisition of more carts.

The history of the Desamparados area goes back to the earliest colonial era and is supposedly the site of Garci Muñoz, the first Spanish settlement which disappeared long ago. Nobody, not even historians, knows for sure where the old city was located but some local residents say “it was around here somewhere.” The early 1800’s brought coffee growing and prosperity to the region.

The museum is still in the “getting ready” stage, says Monge. She hopes to find furnishings from that time period, or reproductions to fill the three houses. The land with the Castro-Fernandez house, was donated to the city of Desamparados in 1980 but was damaged by the earthquake in 1991 and had to close.

In the almost 30 years since then the houses were closed up and deterioration set in. The houses have been restored and made safe but still lack furnishings and adornments. A building of newer construction is used for workshops and classes in art and traditional crafts.

Monge suggests calling ahead (22l8-1667 or 2259-2905) so that someone can “show you around”. You can find more on the museum and other activities in the Desamparados area at www.desamparados.go.cr, or by googling agenda cultural desamparados.

Entrance prices are pleasant too. For nationals and residents, c1000, c500 for older adults and students, and $5 dollars for foreigners. The museum is located in Salitral de Desamparados.

Look for the old stone building on the corner, now the Centro Cultural for Desamparados, across the street from the side of the church, and follow that street about a mile, turn right just before the blue painted bridge one block to the Abastecedor 4M on the corner and turn right again.

The museum is 150 meters up that street. Look for the gate and sign. Or to find your way on WAZE the key is Lomas de Salitral.