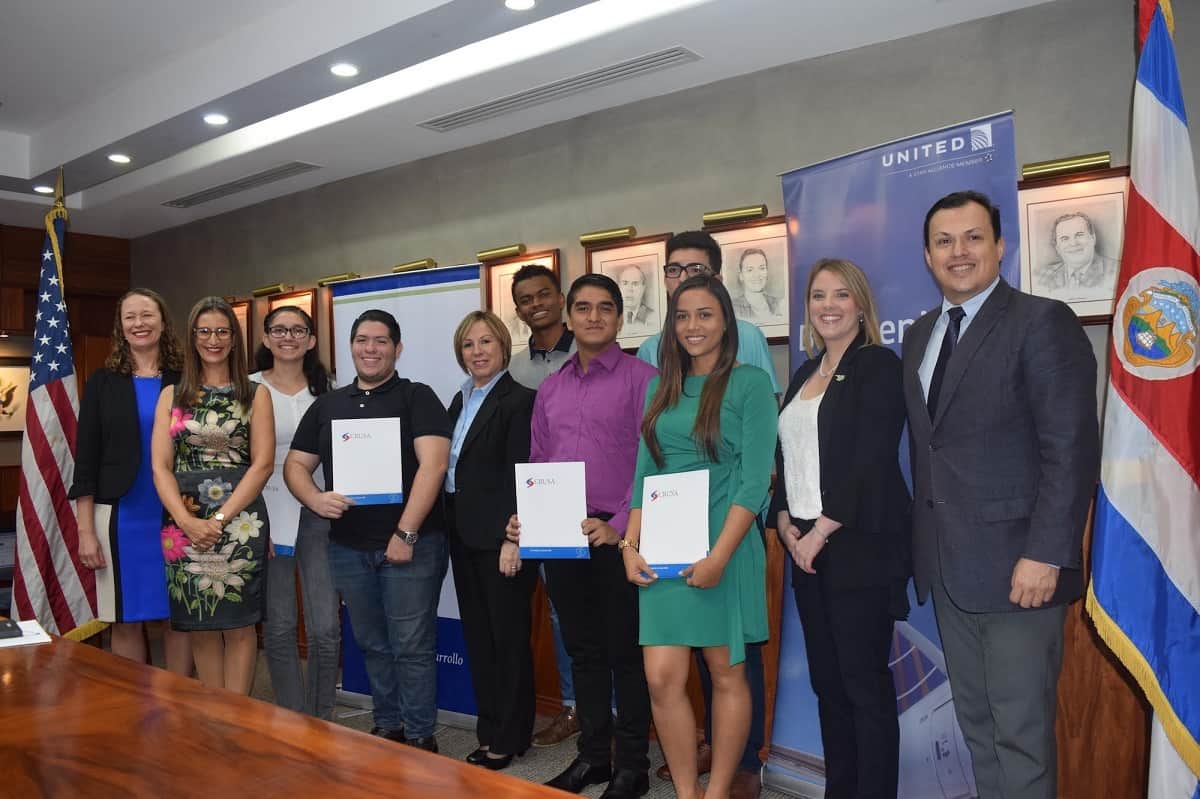 The six grant recipients with their supporters. (Courtesy of the Costa Rica USA Foundation)

Their outstanding academic performance, English fluency, leadership, and interest in science, technology, engineering and math (STEM) have paid off: six Costa Rican students have won a scholarship for technical studies in the United States.

The program is made possible by an alliance between the Costa Rica USA Foundation for Cooperation (CRUSA), the Costa Rican Investment Board (CINDE), the U.S. Embassy, United Airlines and the Costa Rican-North American Cultural Center (CCCN) through its educational advisory office, Education USA.

Brought to you by the Costa Rica USA Foundation (CRUSA). Courtesy of CRUSA

“For the CRUSA Foundation it’s essential to support the country in building capacity in strategic areas, especially to promote the knowledge economy and innovation,” said Marisela, Coordinator of Human Capital, Knowledge and Innovation, in a statement. “We know that the country is increasing its numbers of new professionals in science and technology, but it’s not enough to meet the demand of the business sector.”

According to CINDE, multinational businesses are poised to double their number of jobs year-on-year if the supply of qualified personnel increases in STEM fields. In 2017, 13,754 high-quality and well-paid jobs were generated, CINDE states.

Of the young people who received scholarships, five are from public Vocational High Schools (CTP) in General Viejo, Santa Ana, San Isidro de Heredia, San Agustín and Cartago (COVAO), while the sixth is a student from the José Ramírez High School, a public school that offers the International Baccalaureate program. All six participated in a rigorous selection process with a committee made up of representatives from CINDE, the Embassy, Education USA and the CRUSA Foundation.

Maxwell Jornae Pita Nelson, 18, from the CTP San Agustín, says that while it was difficult to leave his mother and sister behind in Limón, on the Caribbean coast, to live and study in Cartago, he knew it was essential to get a good education that has now led to international study.

“Going to another country to study, increase my professional skills and share another culture is one of those opportunities that are scarce for low-income people like me,” he said, adding that his education in the United States “is a challenge I want to put my whole heart into, in name of all those who have supported me.”

María Nazareth Mata Castillo will have to leave her home in Peñas Blancas de Pérez Zeledón, where she lives with her parents and four siblings, to follow her dreams and her passion for math.

“Everyone at home loves numbers and research,” she said. “I want to be a change agent, demonstrating that numbers are fabulous and that women can play with them. The more tools I can develop, the more I can contribute to my family, community and country.”