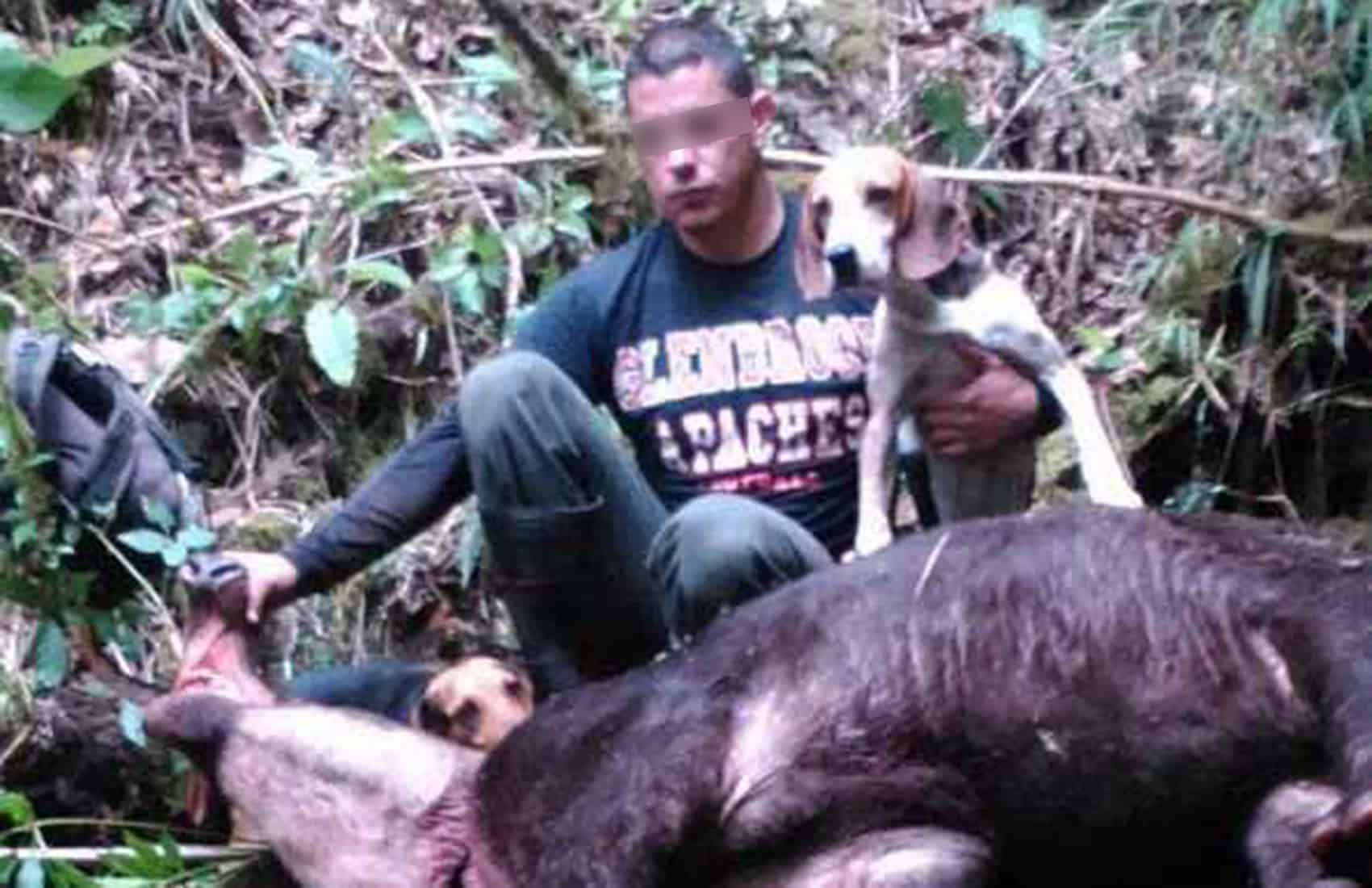 A suspected poacher who was arrested on Sept. 18, 2015 was photographed with a dead tapir. (The Tico Times)

Police arrested a man Friday morning suspected of killing a tapir among other animals in several protected areas in southern Costa Rica. The suspect, identified by the last names Gamboa Jiménez, allegedly led groups of poachers into protected areas to hunt for sport, which was outlawed in Costa Rica in 2013.

Gamboa was with three others this morning outside Uvita, on Costa Rica’s central Pacific coast, when a joint operation between the Judicial Investigation Police, National Police and Environment Ministry park rangers resulted in his arrest. The other three suspects escaped. Gamboa was found with a .22-caliber rifle, a machete and a dog that reportedly was used for hunting. He was arrested for carrying a weapon illegally. The suspected poaching is still under investigation, according to Luis Sánchez, wildlife manager of La Amistad-Pacífico Conservation Area.

In 2013, then-President Laura Chinchilla (2010-2014) signed a bill banning hunting for sport in Costa Rica. The hunting law set fines for sport hunters of up to ₡1.5 million ($3,000) and up to ₡900,000 ($1,800) for people caught trafficking wildlife species. Hunting for personal consumption in limited circumstances, scientific research or wildlife population control is allowed. The suspected poacher during his Friday arrest. Courtesy SINAC

Sánchez said this was not a case of hunting for food. Sánchez told The Tico Times that the suspected poacher and his accomplices were known to kill animals and then leave the carcasses behind. The largest hunting party allegedly involving Gamboa was seven, Sánchez said.

Locals in the surrounding areas had reported Gamboa to the authorities after a photo appeared on social media of him posing with a dead tapir, according to a statement from the National System of Conservation Areas (SINAC). Besides the tapir photographed and shared on social media Gamboa is under investigation for allegedly killing two small deer.

Sánchez said that poaching on protected land is a serious problem in Costa Rica. He said that park rangers are too few and outgunned to handle the problem. Without the assistance of the public, he said, this operation would not have been possible.