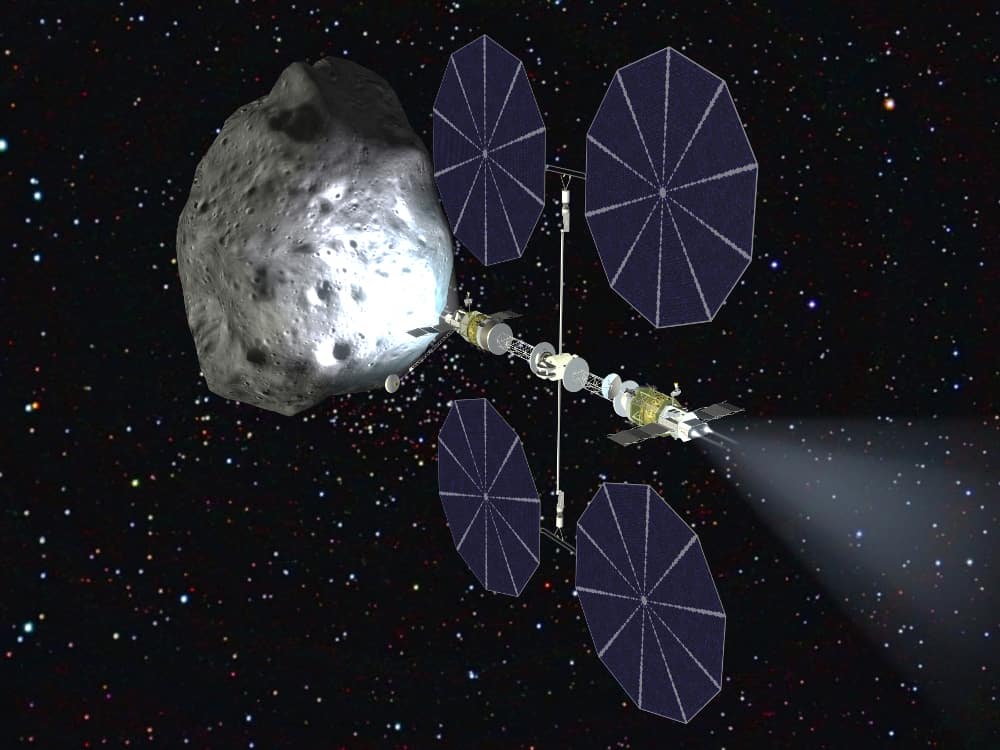 An illustration of a VASIMR-engine-mounted rocket deflecting an asteroid away from Earth. ((Courtesy Ad Astra Rocket Company))

Ad Astra, the rocket company founded by Costa Rican astronaut Franklin Chang, announced a $10 million contract with NASA to develop deep-space propulsion technology. Spread out over three years, the public-private partnership will help Ad Astra develop its VASIMR prototype engine for in-space travel around the Earth, to the moon or – one day – on a mission to Mars.

The funding, awarded through NASA’s Next Space Technologies for Exploration Partnerships (NextSTEP), will help the Houston-based company demonstrate the engine’s ability to operate for up to 100 hours continuously. The company says previous tests have proven its success for short durations of less than a minute.

Some of the project’s development will take place at the company’s facility in Liberia, the capital of Costa Rica’s northwestern province of Guanacaste, including thermal simulations and erosion measurements for the Variable Specific Impulse Magnetoplasma Rocket.

“We are thrilled by this announcement and proud to be joining forces with NASA in the final steps of the technology maturation,” said Chang, Ad Astra’s chairman and CEO, in a statement.

Engineers designed the VASIMR engine as a scalable, high-efficiency, low-weight solution to space propulsion. The plasma engine is not strong enough to lift a spaceship into orbit, but it can propel ships or cargo already in space faster and more efficiently than chemical propulsion systems, such as the fuel used in traditional rocket launches. VASIMR uses plasma, an electrically charged gas that can reach extreme temperatures, and magnets to release controlled pulses of thrust.

José Antonio Castro, chief scientist at Ad Astra’s Liberia office, told The Tico Times that the technology could be applied to a variety of space missions. Potential missions include keeping the International Space Station from falling to Earth or removing large space debris from Earth’s orbit that poses a risk to astronauts and satellites. The plasma engine could also be mounted on a rocket to deflect asteroids heading too close to the Earth. Eventually, the rockets could be used to ferry cargo to the moon or deep space missions to Mars and beyond.

Castro said that if the company secures enough additional private investment and all goes well, the rocket could be operational in three years.

Other recipients of the NextSTEP funding included Aeroject Rocketdyne Inc., and MSNW LLC of Redmond, Washington, according to a statement from NASA.

“It’s very satisfying for us at the company,” Castro said. “It’s a recognition of Franklin’s vision for NASA to put us on the same level as much larger companies. It’s a big boost to our confidence.”