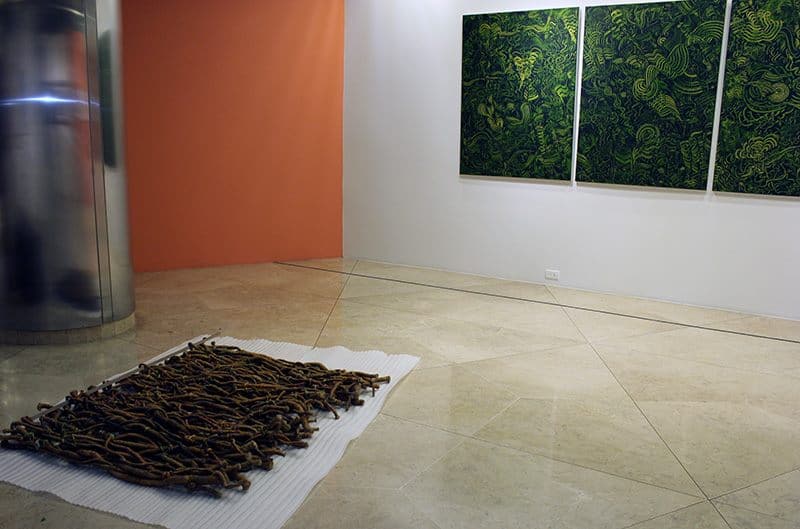 If you’re going to dedicate a year to a single exhibit, it better be good. The Central Bank Museums have taken a considerable risk with their latest exposition, “Casi Invisibles” (“Almost Invisible”), partly because of its academic curation, and partly because the show runs until September 2015. That’s a long time to occupy one of the most hallowed art spaces in San José, not to mention one of the biggest magnets for foreign tourists.

Yet “Casi Invisibles” is a carefully laid out exhibit, and the museum was wise to feature such a diverse body of work. You may raise an eyebrow at the title subhead, “Innovación, Ruptura, Trangresión,” words that sound pulled from an art historian’s doctoral thesis, but they’re not really important to the average patron. The purpose of “Casi Invisibles” is to show just how diverse Costa Rica’s artists are, and just how broad their expression can be.

Many of the works are surprisingly avant-garde, like Cecilia Paredes’ “La Enseñación de Rosa” (translated here as “Dreaming Rose”). The large-format photograph shows a room covered in floral wallpaper. In the middle of the portrait is a woman, her head down and cradled in her arms, but her skin is painted the same pattern as her surroundings, so she is effectively camouflaged. The image is dreamy, yes, but it is also significant that a female figure blends into the background, making her presence nearly transparent. We could view this photograph as a dreamscape, or we could see it as a metaphor for society’s “almost invisible” woman. Like all good surrealist art, the decision is up to us.

Much of the series is realistic or pastoral in character, and the Costa Rican atmosphere reigns throughout. While the museum is large, underground, and made of concrete, you can practically smell the finca as you wind your way through the exhibit. There are recurring references to birds and fish, agriculture and tropical plants. Most of these artists have used their environment as inspiration; most of the artwork is representational, some is abstract or even strange, but there is very little anger. Like most artists in Costa Rica, this bunch seems pretty tranquilo.

As a museum representative told me, one of the goals of “Casi Invisibles” is to celebrate women and minorities, as well as a mix of older, younger, famous, and obscure Costa Ricans. That inclusion is deliberate but not forced, a delicate balance for any major museum. The last exhibit to debut in the Central Bank Museums was “Juego Sucio,” a solo show dedicated to the (male, Spanish) artist José Miguel Rojas. While that display was excellent, it is refreshing to see such a large, centrally located museum showcase such variety for 11 straight months.

The exhibit is varied enough that different guests will veer toward different styles. For this critic, a personal favorite was “In-A-Gadda-Da-Vida,” five acrylic paintings on linen canvas hanging side by side. Rolando Faba’s landscapes show nothing but rain forest, the stylized vegetation so thick and dark and verdant that it seems impenetrable. You could get lost in his replicated branches and vines, a jungle canopy as mystically rendered as a Maurice Sendak picture book. Faba doesn’t editorialize, only faces the visitor with a wall of green. It is the same feeling you get riding along a mountain road in the province of Alajuela, surrounded by rolling eiderdowns of foliage. That’s not an easy feeling to trigger, yet Faba has done it.