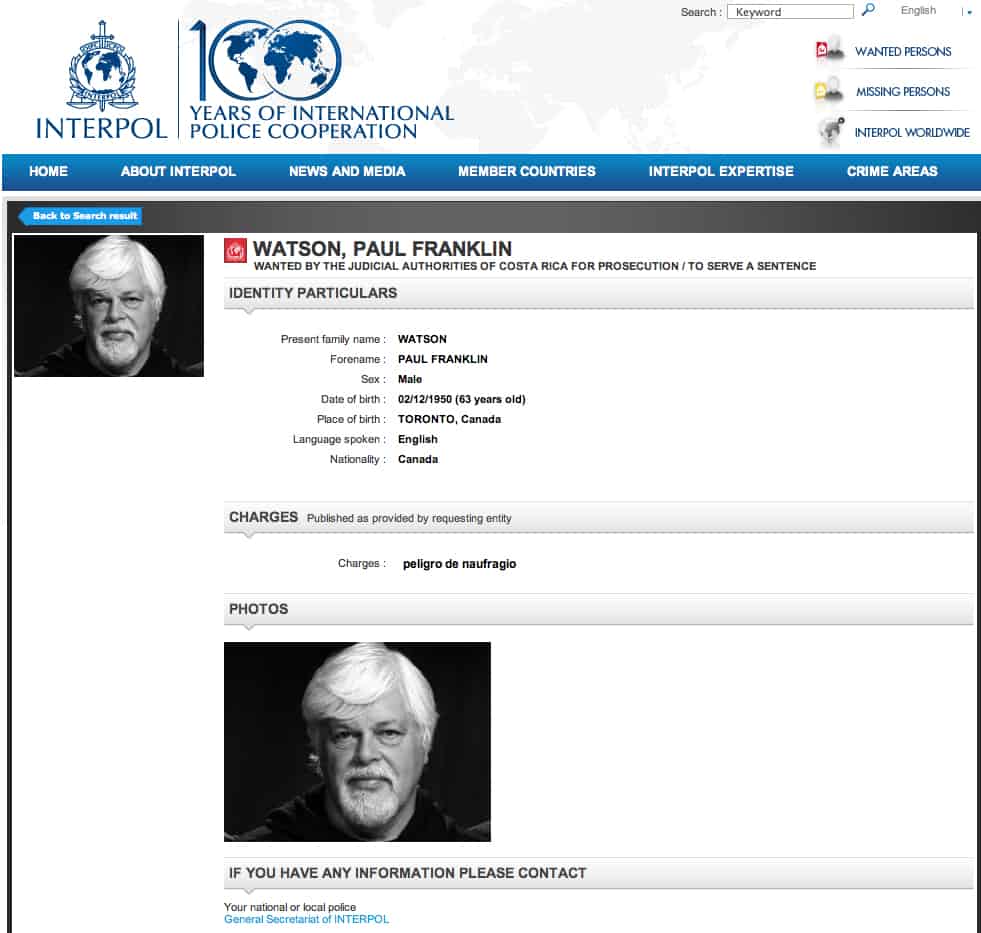 He was there, then he wasn’t, now he is again.

The controversial conservationist and Sea Shepherd founder Paul Watson, 63,  is back on Interpol Costa Rica’s Red Notice website, which states that he is a fugitive wanted for “prosecution” and to “serve a sentence.”

Costa Rica continues to pursue Watson’s arrest on charges of attempted shipwrecking over a now well-known incident off the coast of Guatemala in 2002. But he had disappeared from Interpol’s website as a wanted fugitive in Costa Rica, although he also is red-listed by Japan over an incident involving Japanese whalers in the Southern Ocean, the subject of his TV show on Animal Planet, “Whale Wars.”

Back in October, Watson said the Interpol Red Notice ordered by Costa Rica against him had been dropped. At the time, Watson had just returned to the United States after spending 15 months at sea to avoid arrest.

But Costa Rica quickly responded to his claim by issuing an extradition request to U.S. authorities, who did not act on that request.

“Finding the accused [Watson] in the United States, we request his immediate capture, and once that has been executed the procedure for his extradition will begin,” First Circuit Judge Jorge Cordero stated in November. That extradition never happened.

Costa Rica claims Watson, a Canadian citizen, violated Article 251 of the country’s Penal Code, which sanctions the endangerment of a ship and its crew. If found guilty, he could face up to 15 years in prison. Watson was arrested in May 2012 in Frankfurt, Germany, where he spent a month in jail. He was released to house arrest, but fled Germany by land and spent the next 15 months at sea.

Both Watson and his attorney in Costa Rica, Federico Morales, said their attempts to have the Costa Rica case thrown out due to constitutionality concerns and the possible expiration of the statute of limitations on the charges have been met with a brick wall at the judicial branch.

“I’m trying to figure out what the status is [in my case] now that there’s a new government. I don’t know if they still want me. This whole thing has become very, very complicated,” Watson told The Tico Times in a recent telephone interview.

“Every time my lawyer in Costa Rica tries to ask, they say, ‘Well, have him come here and we’ll discuss it.’ They won’t even talk about statute of limitations or anything. They just want me there, and I think they want me there for a purpose. It’s got nothing to do with putting me on trial. We’ve been trying [to contact the new administration of President Luis Guillermo Solís], but we haven’t managed to contact them,” he added.

Sea Shepherd, which had planned on signing a joint patrol agreement for Costa Rica’s Cocos Island in 2002 before the plan was scrapped because of the legal case, now has a toehold in Central America. In January, the conservation group’s 35-meter interceptor vessel the Brigitte Bardot teamed up with the Guatemalan Navy to patrol for marlin poachers in the Pacific. According to Watson, “the Guatemalans said that what we were doing in Guatemala at their request was perfectly legal, and so if it went to trial in Costa Rica, that would certainly be evidence.”

The recent Guatemalan patrols helped stop four poaching operations, and several suspects were arrested, Watson said. “It was very successful, and we have a good relationship with Guatemala,” he added.

But what Watson really wants to do is send his fleet’s fifth ship, the Jairo Mora Sandoval – named after the slain Costa Rican sea turtle conservationist – to Costa Rica’s Caribbean coast to patrol against turtle poachers. So far, there has been no indication that the Solís administration is willing to entertain that offer.

Watson also told The Tico Times he felt vindicated by a March ruling by the International Court of Justice at The Hague ordering Japan to stop its Antarctica whaling missions, which the court said are “commercial” hunts, not research-based, and therefore illegal. Since 1986, Japanese whalers have used a legal loophole to skirt an international whaling ban that allowed them to continue slaughtering the mammals, ostensibly to gather scientific data. But it is no secret that the whale meat from those hunts ends up on dinner tables, and little – if any – research is conducted.

“What it means to us is that for 12 years they’ve been calling us outlaws and pirates, and now the shoe’s on the other foot,” he said. “They’re the outlaws.”