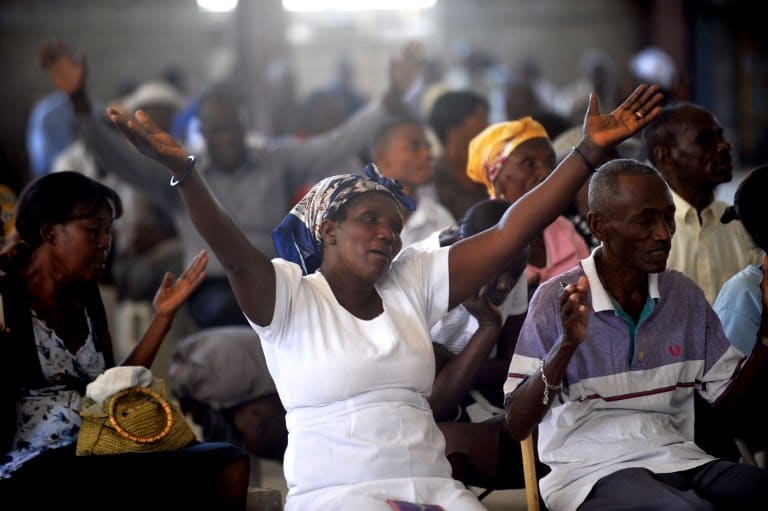 Haitians attend a mass Jan. 12, 2014 at a church under construction adjacent to the Cathedral of Port-au-Prince, to commemorate the 4th anniversary of a magnitude-7.0 earthquake that hit Haiti in 2010. Four years later, the dragging pace of reconstruction is nowhere more apparent than the capital, where its landmark presidential palace and cathedral remain in ruins. The disaster killed more than 250,000 people in the Americas' poorest country. (Héctor Retamal/AFP )

PORT-AU-PRINCE, Haiti — Haiti marked four years on Sunday since a violent earthquake shattered the impoverished nation, which is still struggling to recover from the widespread devastation that killed 250,000 people.

Haitians, many dressed in white, flocked to church services for somber remembrances for those who perished in the tragedy on Jan. 12, 2010, which left about a million people homeless.

But four years on, nearly 200,000 people are still living in dire conditions in temporary shelters, and residents complain of having received little help since nongovernmental organizations left.

President Michel Martelly, who has faced protests over the slow pace of rebuilding, declared the anniversary a “day of reflection and commemoration.”

He lay flowers early in the day at the site of a mass grave where many of the quake’s victims were buried. And he attended a ceremony at 4:53 p.m., the moment the quake struck four years ago.

“Thirty-five seconds, … that’s all the time that was needed, on Jan. 12, 2010, to spread darkness over Haiti. We were all in tears, plunged into despair that day,” Martelly said.

Wearing white as he addressed thousands of Haitians gathered for a minute of silence in memory of the catastrophe’s victims, Martelly also thanked “the friends of Haiti who came from all over to help.”

He called for Haiti’s 10 million people to unite for reconstruction, saying the Caribbean nation would “move forward with our resources in rebuilding.”
“Haiti is like the reed; it bends but does not break,” he said.

Flags were to be lowered throughout the country and businesses closed to mark the anniversary, while radio and television stations were encouraged to broadcast programming suitable to the emotional occasion.

The devastation is still keenly felt in Port-au-Prince, the teeming capital of the Americas’ poorest country.

Faced with criticism over the slow pace of rebuilding, especially of administrative buildings – including the legislative palace – Prime Minister Laurent Lamothe had pledged last week to step on “the accelerator to advance the main projects.”

But church ministers on Sunday railed against the time it was taking to reconstruct buildings that were largely leveled throughout the capital.

Opposition critics have attacked the government for failing to make better progress on rebuilding.

“We find ourselves again this Jan. 12, 2014 with sentiments of strong concern … over our true engagement in the politics of reconstructing the country,” Senate President Dieuseul Simon Desras said in a statement questioning the government’s “ability to respond to social needs.”

The government says a large portion of millions donated by governments and organizations the world over was spent on the post-earthquake emergency and not for reconstruction.

“We were lucky to have help from Venezuela. Most of our projects were accomplished with Venezuelan money. With slim means, we accomplished a lot of things,” Lamothe told AFP, expressing hope that the international community would make good on its aid pledges.

He also criticized the international community for failing to provide promised aid of nearly $9 billion.

“If the international community had fulfilled its commitment, we would have accomplished 10 times more,” Lamothe said. “But Haiti is better off four years after the earthquake even if there remains much to be done.”

Haiti has recently seen an increase in anti-government protests, some breaking out into violent clashes.

Protesters have called for the resignation of Martelly, who has been in office since 2011, and are demanding better living conditions.

Plans to rebuild Port-au-Prince have been presented to the public, but the construction never happened.

Some 42 public buildings were among those flattened during the earthquake, and most are still lying wrecked.