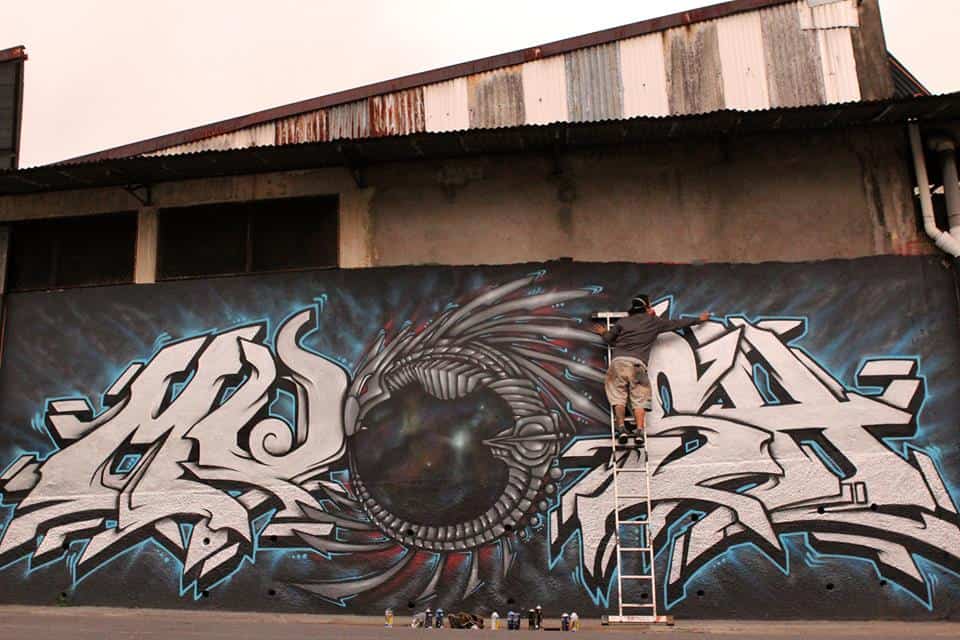 MUSH in action on the city's streets. ((Courtesy of Natalia Vargas))

The Costa Rican street artist known as MUSH has been leaving his mark around the country with his recognizable signature. His work is characterized by elaborate, aesthetically pleasing calligraphy in different shapes and colors. MUSH’s love for the depiction of his artistic name began when he was young and his mother taught him the importance of having nice handwriting. He has also made mushroom drawings an important element of his art.

MUSH, 32, is one of the country’s first street artists; he began his career in 2000 and has produced new works steadily ever since. His latest and most ambitious piece is called Textura Neuronal, located in Lagunilla, Heredia, which uses a vibrant color palette and various textures.

On a rainy afternoon at Casa Batsú in Barrio Escalante, The Tico Times sat down and spoke with MUSH about his life and work. Excerpts follow.

Why do you write your name on the streets?

That’s a good question. Sometimes it bores me; sometimes I want to create other images. However, it has become a habit. Within graffiti most of the things we do began with this idea of leaving a trace that I was here, which is actually a very egocentric act. There are people who give themselves their street names and there are others who are given their street names. It may be Tito [an affectionate diminutive], Gordillo [Fatty], or something like that, and there’s not much mysticism behind it.

It’s pretty fun to leave that print everywhere. It’s sort of like a code. It’s a known language within us [graffiti artists]. Sometimes you just see a signature and you don’t know that person; you watch that person’s style and where he or she paints. You wonder who he or she is. It’s about what’s behind that anonymity and hidden character.

I know a lot of people and many people know me, but at the same time they don’t know me. I was on a bus and overheard people asking who Mush could be, and I was next to them listening. That’s pretty funny. She was talking about my work and me, and I was right there. When I made one of my first graffitis, the day after doing it I went to photograph it and sat down drinking a juice just contemplating the weird thing I had done. A neighbor of mine came along and said: “Hey, that was not there yesterday.” That’s what I like.

One time in Desamparados I wrote, “Who is MUSH?” My friends came and told me later, “Someone is writing, ‘Who is MUSH?’”…[Playing with people’s minds] is fun. Textured details have become a characteristic of MUSH's work. (Courtesy of Manfred Valverde)

Every time you create a new graffiti of your name, how is it a new challenge?

You try to invent new things, but it depends on the artist. There are people who reach a graphic comfort zone in which they develop a style, make it the same every time, and just change the colors. I like to experiment [with different things]. Every day is different. There are days when all I want is to make shapes, or something more abstract and free. When I write my name it’s a whole new challenge with the letter design because it’s about a very pure graffiti in which you question on how to write the name and which types of letters to use.

How has graffiti developed over the years in Costa Rica?

There has been a boom in street art in all countries. It has developed to the point in which it isn’t only graffiti artists painting, but also many talented people who have dared to paint their drawings on a wall. We’ve got to understand that graffiti includes a wide variety of things, including the trend of tags and leaving a trace in the city. Actually, right now there are more of these [tags] than elaborate artwork. There are many emerging young people right now and it’s part of the process because I was one of them at some point, but there are very few people going out there to create elaborate murals.

About 6 or 7 years ago [in Costa Rica] there was a big group of colleagues painting with very distinct styles beyond tags. Most of them are tattoo artists right now; I’m very lucky that I can subsist from painting. People come to me so I can do different types of pieces them. Since this has become my day job I’ve got to do different things. Not all of my friends have had that luck, but it has to do a lot with the idea that if you’re active, it’ll all flow. Painting [on the streets] is not cheap. The materials are expensive. Many of my friends have taken their drawing potential and transferred it into tattooing. The tattoo industry has grown a lot. How does it feel to be one of the first street artists in the country?

I always say that I’m from the second generation [of street artists], but I’m the one who has painted the most. In 1999 I was scribbling. Not until 2001 did I begin painting with 3 or 4 spray colors. The graffiti movement began in 1980 in New York and Germany. Obviously there are more things dating back earlier, but the name manifestation began during that time. I began 20 years later, so I’m from a very recent generation.

Before I started painting here in San José, there was no graffiti movement whatsoever. I met Checho, a friend who paints, in 1996. He had very few graffiti and drew the A of anarchy… I’m from that first or second generation and from all of those people, I’m the one that has never stopped painting. From 2000 until now, there are a lot of people who have begun painting but then disappeared. They have come and gone.