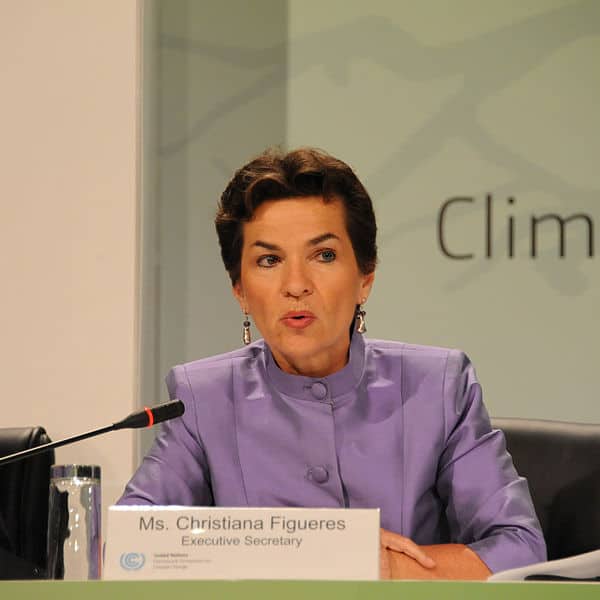 The woman charged with corralling the world’s leaders to come up with a clear plan for saving the planet took to the popular social network Reddit on Wednesday to answer questions about climate change and the upcoming Paris climate talks.

Before that, she was part of Costa Rica’s climate negotiating team before the U.N.

Her diplomatic work has gone into overdrive this past year in the run-up to the Paris climate conference in December, known as COP21. The U.N. has set a goal of preventing global temperatures from rising by more than 2 degrees Celsius (3.6 Fahrenheit). But Figueres has already said that goal will not be met based on the pledges offered thus far, called Intended Nationally Determined Contributions, or INDCs, by the U.N. climate change convention’s 196 parties.

Still, she said Wednesday that she’s optimistic about success at the Paris summit.

“We have so much momentum going into this conference from the past 5 years of progress in the negotiations and from the businesses, investors, cities and regions that are already engaged in climate action,” she wrote on Reddit during her Ask Me Anything session. “The greatest barrier to success will be in the details – how the interests of all countries will be reflected in the final text and decisions. Also, finance and technical support for the transition in developing countries will be a big challenge.”

Here’s how Figueres answered other questions posed by Reddit users, including The Tico Times (some questions have been shortened for brevity and edited for spelling and style):

Given its extremely clean energy generation, Costa Rica is one of the world’s lowest emitters. However, that has not stopped Costa Rica from assuming its responsibility to identify the mitigation contribution it can make in addition to identifying the urgent adaptation measures it must take. What can Latin America do? Do you want 5 pages on that? But bottom line, every country can and must contribute in the way that makes the most sense to them given their natural resource base, geographic location, emission reduction potential and vulnerability.

More and more the world is recognizing that maybe the 2 degree goal is not something that’s going to be achieved out of the Paris agreement. Given the purpose of Paris and previous COP [Conference of the Parties] meetings was to achieve this 2 degree goal to prevent catastrophic climate change, what hope do you see in the world?

I have been pellucidly clear that the agreement in Paris is not going to reach a 2 degree limit on temperature rise as though that were something we can take off a magical shelf and put on the table. I have been equally clear that getting us on to the 2 degree pathway is entirely possible. This is why the Paris agreement will have two very important components with regard to emission reductions: First, it will harness all the national climate change plans which as a group, if fully implemented, already substantially reduce the BAU [business-as-usual] growth in emissions. Second, in recognition that this first set of INDCs is a departure point and not a destination, the Paris agreement will construct a path of ever-increasing emission reductions with periodic checkpoints of progress until we get to the 2 degree pathway.

Despite the ocean’s critical role in regulating climate — and providing food security and livelihoods for millions of people — international climate negotiations have only minimally considered impacts on the ocean. Will fisheries and the ocean take a back seat to forestry and overall emissions in Paris?

The Climate Change Convention is structured based on emissions of greenhouse gasses within national territories. Despite the fact that oceans are being directly affected by rising temperatures, they are not included in the Convention or in the negotiations due to their trans-boundary nature. This does not mean we can forget about the oceans. I permanently carry a blue marble with me everywhere I go to remind me of the oceans.

In your opinion, what are the chances that the upcoming deal legally recognizes climate refugees?

If we do not do our job properly, we will have painful situations of forced migration. Perhaps to a scale we cannot even imagine. That is precisely why it is so urgent that we agree on a path to reduce global emissions within the boundaries of science. Costa Rica’s Christiana Figueres: “I permanently carry a blue marble with me everywhere I go to remind me of the oceans.” (Courtesy Avi Kapfer/MarViva Foundation)

Based on your experience speaking with representatives of other nations, what kinds of public actions tend to influence their decisions? Do they cite public opinion as a pretext for inaction or the necessity of more aggressive action?

As an individual you can first be aware of your own climate footprint, reduce as much as possible and then offset emissions so you can be an example of climate neutrality now. You can also use the power of your vote to support political leaders who are on the right side of history. And finally, you can use your wallet to send clear messages that the goods and services you want have to be low-carbon.

What are your opinions on the presence and role of civil society observers at the COP? What will the secretariat be doing in Paris to ensure transparency and inclusion of observers in the negotiations?

The role of civil society in continuing to encourage ambition expressed in both environmental integrity and social fairness is critical to all our negotiations. At the same time, the UNFCCC is an intergovernmental treaty body designed for the purpose of governments reaching common ground with each other. Over the past 5 years, we have consistently increased the transparency of the intergovernmental process by providing constant and timely information about the proceedings on our website and by encouraging frequent and open stocktaking plenaries. We have also not only allowed but frankly even supported actions on the part of civil society representatives as long as they stay within the agreed rules of conduct.

The U.N. seems to have put a lot of emphasis on the presence of youth, but once at the negotiations, the youth are pretty universally ignored in the process. What can the international community do in Paris to include youth as more than just tokens?

In my experience, the most powerful influence of young people or any other member of civil society takes place on a 1-to-1 basis in direct conversations with government delegates. Furthermore, that voice is more listened to when it is deeply informed of the issues at hand, when it is well reasoned and when it reaches beyond current comfort but does not venture into the unattainable.

Do you consider the agreement of France, UK and China of last week to cooperate in nuclear energy a favorable development, given that it cuts back renewable energies in the UK and locks in a nuclear energy future?

The use of nuclear energy is a decision that is and remains a sovereign responsibility of each country. It is clearly a non-GHG emitting source, however in its use every country will have to consider the other potential consequences as well as the rising cost of additional safety measures that have now been proven to be necessary.

Can you comment on the role of cities in leading climate change adaptation and mitigation? Where should urban planning focus in the future?

The expansion of urbanization and growth of cities in the future is well known. What is less understood is how we can plan and develop cities that are more organically grown and lived in than built and operated. If we look at future cities from the atmosphere’s perspective lived-in gardens, not expansive Lego-scapes.

What advice would you give to young people who want to in the future work towards building a greener tomorrow? I am a physics student who is currently performing my undergraduate research which is on concentrated solar power, but it’s hard to know what else I can be doing to further the cause for renewable energy.

You are totally in the right field! CSP is very promising, but as you know still needs a way to go to bring down costs and expand deployment. Please do continue your research and take a leadership role in increasing renewable energy around the world.

Do you ever get depressed about our collective failure thus far to take serious measures to halt and/or reverse climate change? If so, what do you do to cheer yourself up?

I don’t get depressed but I do get frustrated with the pace of progress. I stay focused because of my daughters and all the sons and daughters to come.

Do you struggle with your lifestyle knowing that you are a contributor to climate change? What about your colleagues, how does this affect your ability to work?

Yes I am very conscious that I am personally a high emitter given the air travel that I have to do for my job. It does seem in congruous to be fully aware of the need to reduce emissions and yet for the time being be such a high emitter myself. As long as I have the responsibilities that I do, I have to incur these emissions but that will not be my lifestyle forever. In the meantime, in order to be climate neutral and support mitigation and adaptation projects in developing countries, I have purchased Certified Emissions Reductions from the Adaptation Fund using the Climate Neutral Now program and I encourage everyone to do the same, as well as making low-emission lifestyle choices.

For you what is the ultimate success point of COP21? And if the parties fail to meet that point, what will be the political and economic impacts of this failure on future of climate politics?

Do you have a mantra you say to yourself before you are scheduled to speak to a denier so that you remain calm and professional and not say to them what you really want to say (or scream!)?

Ocean warming, acidification, sea-level rise, and the expansion of oxygen minimum zones will continue to have distinct impacts on marine communities and ecosystems, how can the fishing industry make strides to reduce their carbon footprint?

What safeguards for indigenous peoples’ territories and ways of life are being considered in the upcoming negotiations?

You highlight population as a leading issue for tackling climate change. And you go on to say we should “make every effort to change those numbers.” What does it mean to “make every effort to change those numbers”? How would you suggest the U.N. curtail the growth of population? How would you plan to reduce the current population of the world? What are “acceptable” numbers of humans in your eyes?