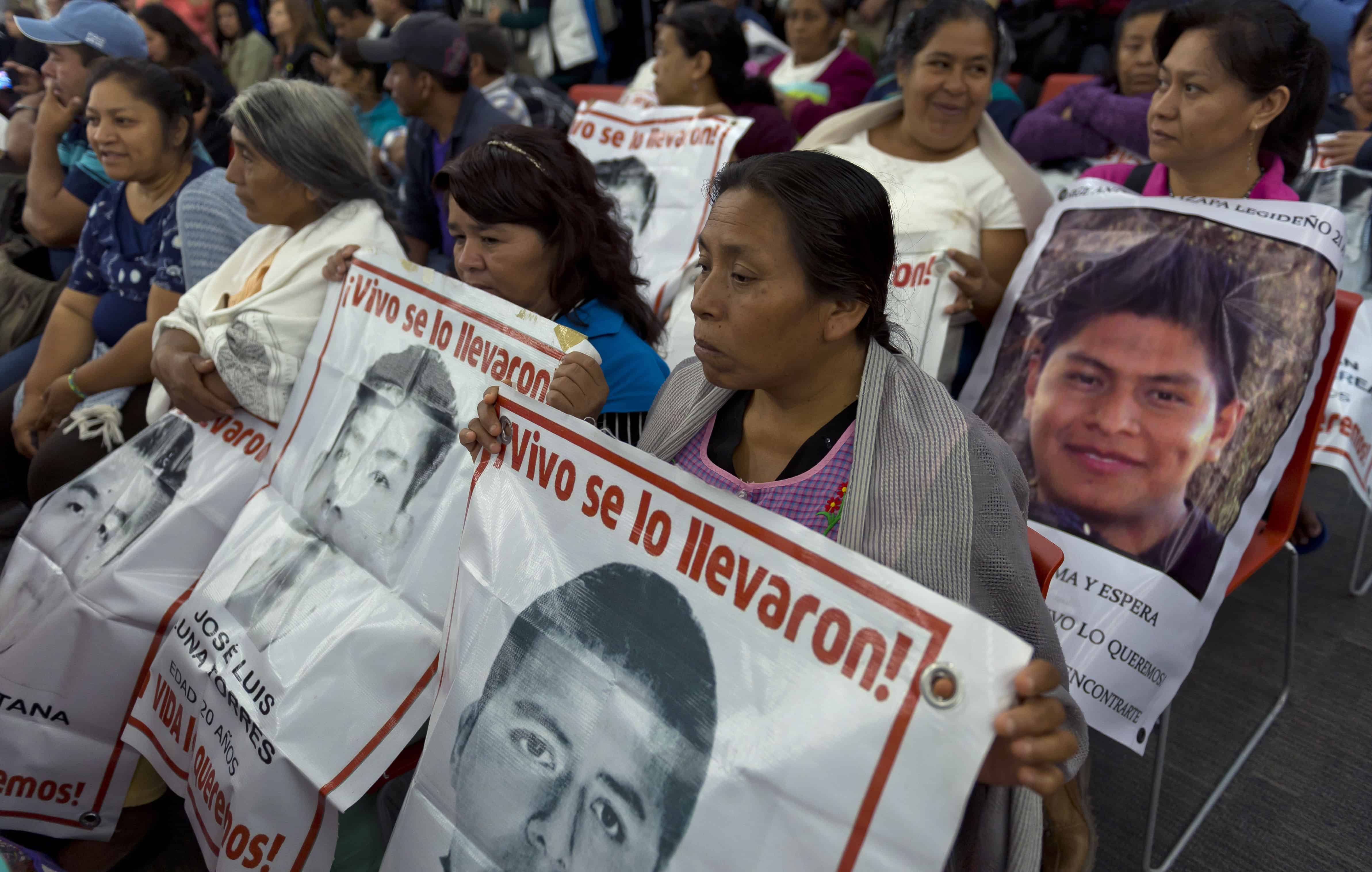 Relatives and friends of the 43 missing students of Ayotzinapa wait for experts of the Inter-American Commission on Human Rights to present the first conclusions of their investigation, in Mexico City, on Sept. 6, 2015. (Omar Torres/AFP)

Urging the authorities to keep looking for the students snatched by corrupt police a year ago, experts from the Inter-American Commission on Human Rights said there was no evidence that they were cremated in a bonfire.

After a six-month investigation, the panel released a nearly 500-page report that raises questions about the official account of a crime that sparked protests and the biggest crisis of President Enrique Peña Nieto’s administration.

The document also calls for a probe into the actions of federal police and soldiers during the night of September 26-27, when municipal officers from the southern city of Iguala shot at buses that had been seized by the students.

The young men were mostly freshmen from a teaching college known for its leftist activism and practice of commandeering buses to move around Guerrero state.

The commission suggested that prosecutors open a new line of investigation into whether the students were attacked because they may have taken a bus criminals used to transport heroin.

The medical and legal experts from Spain and Latin America said they “regret not being able to offer the families, the government, Mexican society and the world a definitive conclusion about what happened to the 43 missing students.”

‘No evidence’ of cremation

The attorney general’s office concluded late last year that Iguala police, with officers from neighboring Cocula, abducted 43 young men and handed them over to the Guerreros Unidos drug gang.

Citing confessions from gang members, then Attorney General Jesús Murillo Karám said the students were killed and stacked in a funeral pyre that burned for 14 hours in Cocula’s landfill before their ashes were thrown in a nearby river.

The charred remains of only one student were identified in a bag found in the water.

But the commission hired a fire expert who concluded that it would have taken 60 hours, some 30 tons of woods, 13 tons of tires and 13 tons of diesel to cremate 43 bodies.

José Torero, a Peruvian-born professor at the University of Queensland in Australia, wrote that such a blaze would have consumed vegetation and trash around it, but only evidence of small fires were found.

“There is no evidence indicating the presence of a fire of the size of a [funeral] pyre for the cremation of even one body,” Torero wrote.

Human rights groups and parents of the victims have accused the authorities of rushing to declare the students dead.

The commission’s investigators said testimony from five suspects about the alleged cremation was full of contradictions that “question the validity” of the government’s conclusions.

The experts said the authorities should investigate claims of torture against suspects. More than 100 people have been detained, including local police, gang suspects and Iguala’s mayor. Greenpeace protests against the disappearance of 43 students from Ayotzinapa, at La Quebrada in Acapulco, Mexico, on Sept. 6, 2015. Members of the environmental organization called for justice for the 43 missing students while on a visit to Acapulco to promote a campaign to raise awareness about the proper handling of electronic waste. Pedro Pardo/AFP

The report reconstructs a night of terror in Iguala, a city in the southern state of Guerrero known as being part of a drug trafficking route.

Three students and three bystanders were killed when police shot at several buses.

In revelations that raise questions about the actions of other security forces, the report says federal police and the army were monitoring the movements of the students before they even arrived in Iguala.

Federal police and soldiers were present at different times at two locations where municipal officers detained students, the report says.

While the report does not accuse the federal forces of taking part in the abductions, it says prosecutors should investigate whether they failed in their “obligation to protect citizens.”

Prosecutors have suggested that police confronted the students on the orders of Iguala’s then Mayor José Luis Abarca because he believed they would protest a speech by his politically ambitious wife.

But the commission said the students arrived in Iguala after the speech and suggested they may have been attacked because they could have taken a bus containing drugs.

A fifth bus that the students had commandeered was never included in the reports from federal prosecutors, who always spoke of four buses. Authorities did not explain the omission.