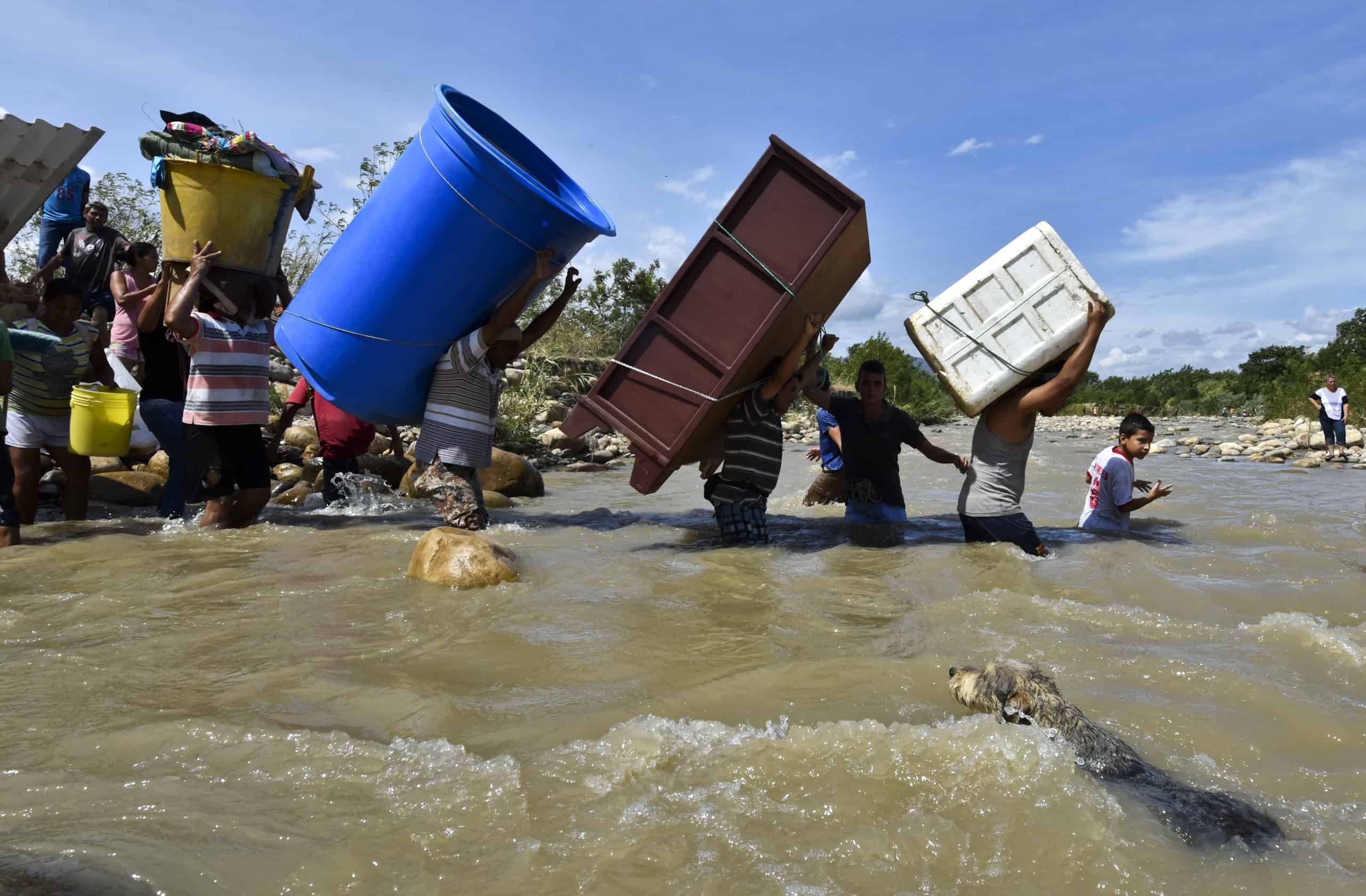 Colombians deported from Venezuela return for their belongings and carry them across the Táchira River, border between the two countries, to Cúcuta, in the Colombian North of Santander Department, on Aug. 25, 2015. Over a thousand Colombians "who did not have any type of identification" had been deported since Friday, according to the governor of the Venezuelan state of Táchira, José Gregorio Vielma. (Luis Acosta/AFP)

CÚCUTA, Colombia — Hundreds of Colombians fled Venezuela Tuesday, opting to leave the country with their belongings rather than be deported empty-handed like more than 1,000 people sent home in an escalating border crisis.

Some carted refrigerators or mattresses on their backs as they made the trek from the Venezuelan state of Táchira back to their home country, wading through the waist-deep water of the river that forms the border.

“We left at 3:00 am in the clothes we were wearing. We wanted to come back before they deported us,” said Rosana Morena, a 25-year-old Colombian who left with her two children.

Venezuelan President Nicolás Maduro ordered the border between Táchira and the Colombian department of Norte de Santander closed last week in response to an attack by unidentified assailants on a military patrol, which wounded a civilian and three soldiers on an anti-smuggling operation. Colombians deported from Venezuela who returned for some of their belongings and crossed them through the bordering Tachira river, stand on the banks of the river in Cúcuta, on the Colombian side, on Aug. 25, 2015. Luis Acosta/AFP

He initially ordered the closure for 72 hours, but later extended it indefinitely, accusing the neighboring country of waging “an attack on Venezuela’s economy.”

That was a reference to the rampant smuggling of heavily subsidized food and other goods out of Venezuela.

Venezuela has long used its oil wealth to fund price controls that keep goods like rice and toilet paper up to 10 times cheaper than in Colombia.

But it is also in the grips of crippling shortages, now exacerbated by tumbling oil prices.

Most of the deportees were sent home for alleged documentation problems, without families or their belongings.

Some 600 of them are being housed in shelters, while 400 are staying with relatives, officials said.

Colombian police said another 400 to 700 people had streamed across the border to avoid deportation. A Colombian who was deported from Venezuela waits in front of his now former house, marked with a "D" for demolition, in San Antonio de Tachira, Venezuela, where he returned for his belongings to carry them across the bordering Tachira River, on Aug. 25, 2015. Luis Acosta/AFP

Dozens of those fleeing accused Venezuelan soldiers of robbing their belongings and ordering them to leave their homes within a matter of hours — marking houses with a D for “deported” or an R for “relocated.”

Authorities in the Colombian border town of Cúcuta have set up a center to deal with the influx.

The two nations’ foreign ministers are scheduled to meet Wednesday in the Colombian resort city of Cartagena to discuss the crisis. Colombian police help Colombian citizens carry their belongings as they cross the Táchira border river from Brisas de Barinitas, Táchira state, Venezuela to Colombia on Aug. 25, 2015. Colombia complained Monday that Venezuela's mass deportation of its citizens during a crackdown on smuggling has created a "humanitarian tragedy" on part of their border. George Castellanos/AFP

Every day should be a celebration, and if you’re actively looking for reasons, it isn’t hard to find one quirky…