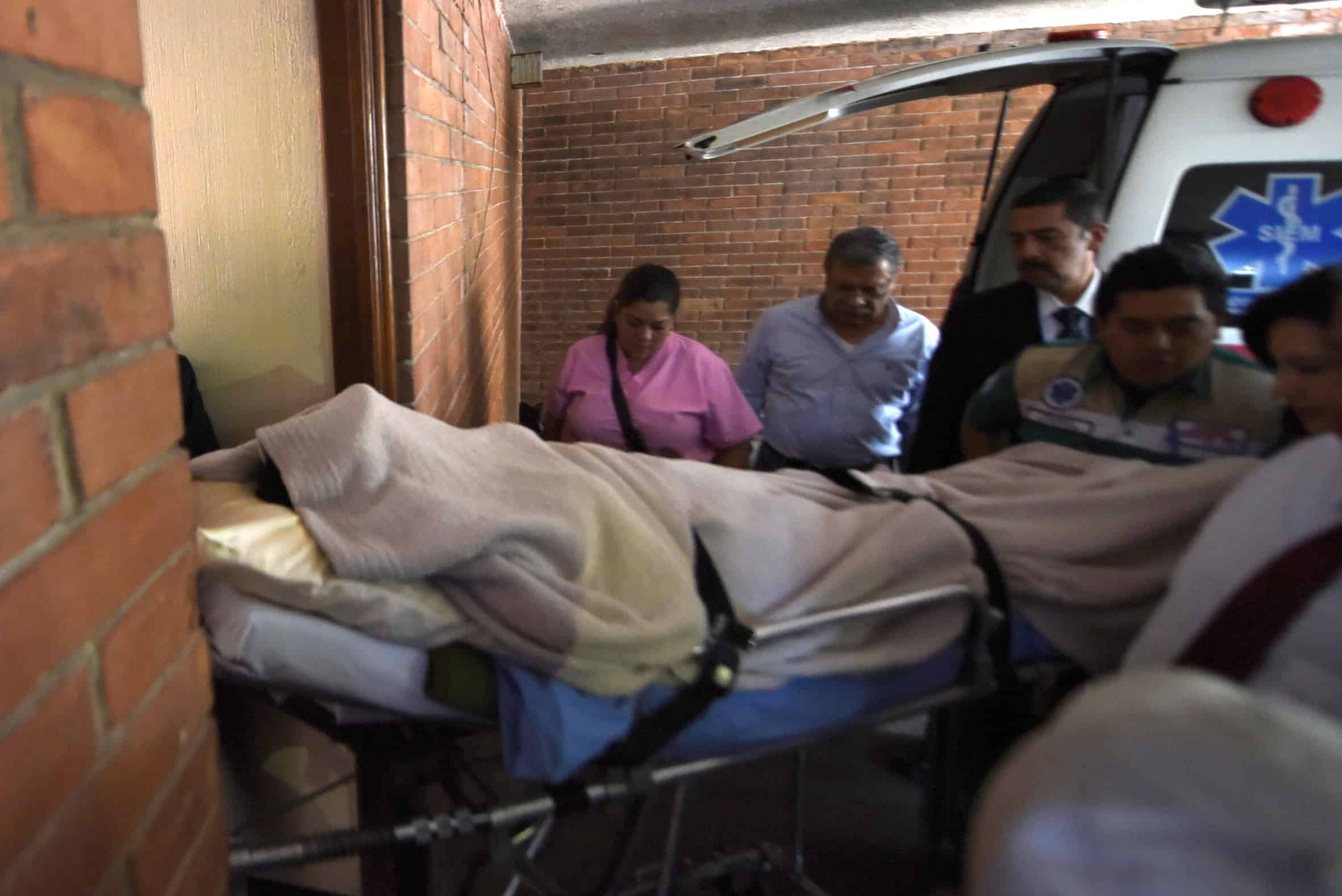 Former Guatemalan dictator (1982-1983) Efraín Ríos Montt arrives on a stretcher at a private clinic in Guatemala City on August 4, 2015. A Guatemalan court ordered Ríos Montt, who is accused of genocide, to submit to a new battery of psychiatric tests to determine whether he's intellectually fit to face trial. (Johan Ordoñez/AFP)

GUATEMALA CITY, Guatemala — It would have closed an historical loop, in a way, had Guatemalan former dictator Efraín Ríos Montt been sent for evaluation — as the country’s highest court originally ordered — to a notorious mental institution that fell into disrepair under his short-lived de facto rule. Ríos Montt is facing charges of genocide, but the trial has been delayed over questions of whether the 89-year-old retired general is mentally fit to stand trial.

But instead of spending a week at the Federico Mora psychiatric hospital, which international observers have described as a hellhole, Guatemala’s Constitutional Court consented Tuesday to let him have the evaluation done at an upscale private hospital.

The decision came after the latest round of legal sparring between Ríos Montt’s defense team and prosecutors intent on seeing the former general tried for orchestrating a genocidal military campaign against the Maya Ixil ethnic group. More than 1,700 Ixil men, women and children were killed in the campaign carried out in 1982 and 1983, the bloodiest years of Guatemala’s 36-year civil war.

Cameras snapped as an ambulance arrived at the accused’s house on Tuesday to transport him to Los Pinos hospital. Ríos Montt was accompanied by his two children, retired general Luis Enrique Ríos Sosa and Zury Ríos Sosa. Ríos Sosa won her own court victory last week: The Constitutional Court ruled that she could run for president in the November elections, despite a constitutional provision prohibiting close family members of a coup leader-cum-president from seeking the highest office.

Efraín Ríos Montt is to spend the next 10 days at Sanatorio Los Pinos undergoing psychiatric evaluation to determine whether he’s mentally fit to stand trial. It’s his second psychiatric evaluation of his second trial for genocide. Ríos Montt was first tried for genocide and crimes against humanity in 2013. He was found guilty, but the conviction was annulled on a technicality and the trial was sent back to square one by the Constitutional Court.

It took two years of delays and legal wrangling for the retrial to be scheduled, and a new date was finally set for July 23. However, two weeks before the trial was supposed to start, Guatemala’s National Forensic Institute issued a report saying that Ríos Montt’s mental health had deteriorated to the extent that he was unable to understand the charges against him, thereby allowing his attorneys to request the case closed.

It later came to light that the psychiatric evaluation was carried out when the patient was likely sedated. Plus, it was ordered by a judge, Carol Patricia Flores, who no longer had authority over the case and who has been accused by the UN-sponsored International Commission Against Impunity in Guatemala (CICIG) of illicit enrichment and money laundering, leading to questions about the report’s impartiality.

On July 23, the courtroom was packed with victims of the armed conflict, human rights activists, military supporters and international observers, including U.S. Ambassador Todd Robinson – all waiting to hear the court’s verdict on whether or not Ríos Montt was fit to stand trial.

The octogenarian wasn’t physically present at the hearing. He participated via videolink from his home. While Ríos Montt’s defense attorneys argued that the National Forensic Institute’s report proved he was mentally incapacitated and unfit for trial, prosecutors provided a written opinion from Federico Castellanos Gutiérrez, head of forensic psychiatry at the Federico Mora hospital, stating that an effective psychiatric evaluation can only be carried out if the patient has not been medicated during the preceding 48 hours.

According to Castellanos, the medication Ríos Montt was given would have sedated him. It also emerged that Ríos Montt had been given olanzapine, a drug used to treat schizophrenia and bipolar disorder but not approved by the U.S. Food and Drug Administration for treating dementia since it can increase the risk of stroke.

The prosecution requested that Ríos Montt be transferred to the Federico Mora hospital to undergo psychiatric evaluation and to ensure his condition received appropriate treatment. The three-judge panel agreed and ordered the accused to spend a week at the hospital. An entire wing was to be cleared of patients and prepared to accomodate the former head of state.

‘Most dangerous facility … in the Americas”

Regarded as a model for mental health treatment in Latin America during the 1970s, the Federico Mora psychiatric hospital has become a nightmarish institution where heavily-sedated patients lie in puddles of urine and feces, as BBC reporter Chris Rogers documented in December 2014.

A 2012 report by U.S. advocacy group Disability Rights International described the Federico Mora hospital as “the most dangerous facility our investigators have witnessed anywhere in the Americas.” The group documented numerous cases of physical and sexual abuse and reported that seven people had died in isolation rooms at the hospital in recent years.

Mentally-ill criminals serving out sentences at the hospital mix with the general population.

Ironically, the hospital’s decline began in 1982, the year that Ríos Montt took power in a military coup. The Guatemalan health ministry ordered the country’s problematic, long-term mental health facility closed and all patients transferred to Federico Mora, which had previously administered primarily acute care. The fusion led to overcrowding and an increasingly serious managerial crisis.

After Disability Rights International lodged an official complaint, in 2012 the Inter-American Human Rights Commission ordered the Guatemalan government to improve conditions at the hospital. According to media reports and watchdog groups, not much has changed.

Zury Ríos Sosa cited the BBC documentary as proof that sending her father to Federico Mora for an evaluation posed a serious threat to his wellbeing. The former dictator’s attorneys argued that if it was absolutely necessary to move their client out of the comfort of his home, he should be sent to a private institution given his status as a former head of state. Ríos Montt’s defense team also accused the judges of bias.

At first the judges seemed unlikely to budge. The court confirmed its original order and two days later a small group of Ríos Montt supporters was waiting outside the Federico Mora hospital for the former general to arrive. Some waved placards reading “There was no genocide.”

But their cause célèbre didn’t show up. Minutes before Ríos Montt was due to be transferred, his attorneys announced they had obtained a provisional court order to suspend the transfer while a judge and forensic expert determined whether it would endanger his life.

The court order raised suspicion given that one of the members of the appeals court who signed it, Judge Noé Ventura Loyo, was elected thanks to congressional support from the political party founded by Ríos Montt, the Guatemalan Republican Front (FRG).

The appellate court that issued the ruling is also the same court that upheld sanctions against Judge Yassmín Barrios, the judge who presided over Ríos Montt’s original genocide trial and conviction.

Ríos Montt is now lying, presumably in comfort, at Sanatario Los Pinos. The results of the new psychiatric evaluation being carried out by the hospital’s medical experts will determine whether or not the genocide trial against Ríos Montt moves forward. The next hearing in the case is scheduled for August 18, when judges will review the results.