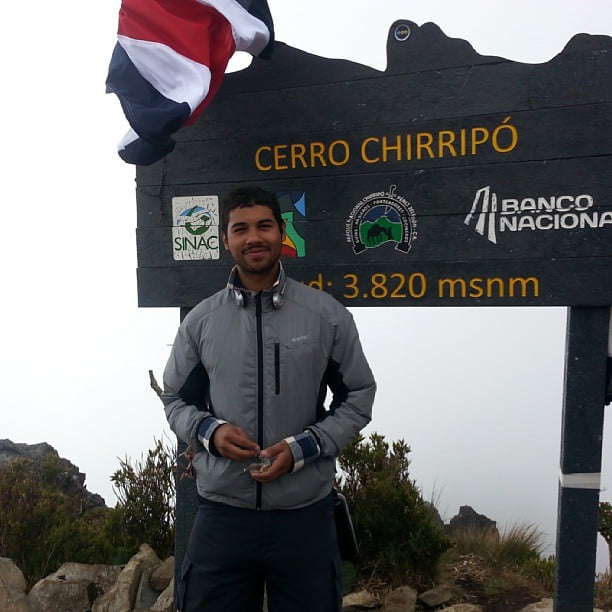 Costa Rica, a tiny, biodiverse Central American country that is striving to achieve carbon-neutrality in the near future, has produced its fair share of ecology-minded thinkers and actors. Among them is 25-year-old journalist Diego Arguedas Ortiz, whom the British daily The Guardian earlier this month named one of the “young climate campaigners to watch before the UN’s Paris summit.”

It was a deserving nod on a crucial issue ahead of a key summit. From Nov. 30 to Dec. 11, leaders from 190 nations will gather in Paris for what The Guardian has called “the world’s last best chance to reach an agreement on cutting carbon emissions.” As the daily noted, commitments on greenhouse gas emissions are set to expire in five years, and Paris 2015 will determine what happens for the next decade. A lack of action, say scientists, would be catastrophic, and there are plenty of examples of what that might look like.

We chatted via email with Arguedas about his involvement in climate summits, his background in journalism and his thoughts on Costa Rica’s role in reducing greenhouse gas emissions. Excerpts follow:

TT: You’re currently at Semanario Universidad – how long have you been there, what beats do you cover and what are some of your journalistic goals?

DAO: I came to Semanario in May 2014 from [the Costa Rican daily] La Nación, which was my journalism school – specifically scientific journalism – and I took the job here because I was really interested in what [former EIC] Mauricio Herrera and [current EIC] Ernesto Rivera were proposing to accomplish. Here I cover energy, transportation, climate change, the president’s Cabinet and international relations. In general, Semanario Universidad aims for more in-depth coverage of the country’s most relevant issues by taking advantage of our weekly schedule to investigate on a deeper level. Climate change is a central issue in that vision, and actually several stories from our recent special edition on the environment approached the subject from different angles.

How did you become involved in the issue of climate change, and as a Tico, what role do you see Costa Rica playing?

I came into it via the editorial team of Aldea Global, at La Nación. I’ve always been interested in the impact humans have on the planet (when I was younger, I wanted to be an environmental reporter for National Geographic), but I was given the space to do it by Alejandra Vargas and Michelle Soto. With them, and with the Climate News Mosaic team, I covered the 2013 Climate Conference, and since then I’ve always followed the issue closely.

Costa Rica emits very little (around 0.02 percent of the world’s total greenhouse gas emissions), but nevertheless we’ve made the commitment to be carbon-neutral by 2021. We have yet to see how we’re going to do that, and I think that there is some clarity lacking on this goal. That covers one of climate change’s central issues: the mitigation of emissions. However, our big challenge is adapting to the negative consequences of climate change: drought, rising sea levels, the resilience of infrastructure, the impact on biodiversity. We need our country to make the issue of climate change a central element of public policy, and there have been steps taken to do that. But we need clearer signals. The drought we’re seeing (and that we’ll continue to see) right now in Guanacaste is a thermometer of all of this. Another key issue will be the “Chinese refinery” – a country that wants to call itself “green” cannot invest $1.5 billion in the petroleum industry. What do you hope will come out of Paris, and what is your take on climate summits in general?

Summits need to provide a road map, but action should come from the bottom up. Paris is a requirement, something that we can’t let pass without defining things this year, because all of the studies talk about the need for an emissions cap in the very near future (some say the year 2020 in order to remain under a 2 Celsius change). In other words, governments need to reach an agreement now, and in that aspect Costa Rica plays a progressive and positive role in the negotiations. However, what’s still lacking is for citizens to make climate change a personal issue. Divestment movements have made marvelous progress on this point, bleeding the financing of petroleum companies, and there should be more efforts like this. Summits are necessary, because it’s easier for 195 countries to come to an agreement than it is for 7 billion people. But if those billions of people don’t take the matter into their own hands and take action, the panorama will be complicated. In Costa Rica, the work of organizations like Costa Rica Limpia and CO2.cr to promote citizen participation shows us that there are people who are interested in the issue, and that there also are spaces to promote innovative ideas.

Why is it important for every Costa Rican to take climate change seriously?

Uf. It’s partly common sense and partly ethical principles. It’s common sense because if we continue at the pace we’re at with fossil fuel consumption and the same methods of agriculture, livestock and transportation, the planet will change radically, and it’ll become an inhospitable place for us. It’s an ethical issue because as a rational species, it’s incomprehensible to continue leading a lifestyle that is incompatible with our own existence and with that of so many other species. In Costa Rica, we’ll be affected in many areas: If we continue the pace of emissions, it will rain 32 percent less in 2100, the average temperature will increase by about 4 C, and the sea level will rise, complicating the lives of people on the coasts. But we still have time to change.

Follow Diego Arguedas Ortiz on Twitter at @arguedasortiz and Semanario Universidad at @SemanarioU. Read The Guardian’s “Everything you need to know about the Paris climate summit and UN talks” here.

View all posts by David Boddiger