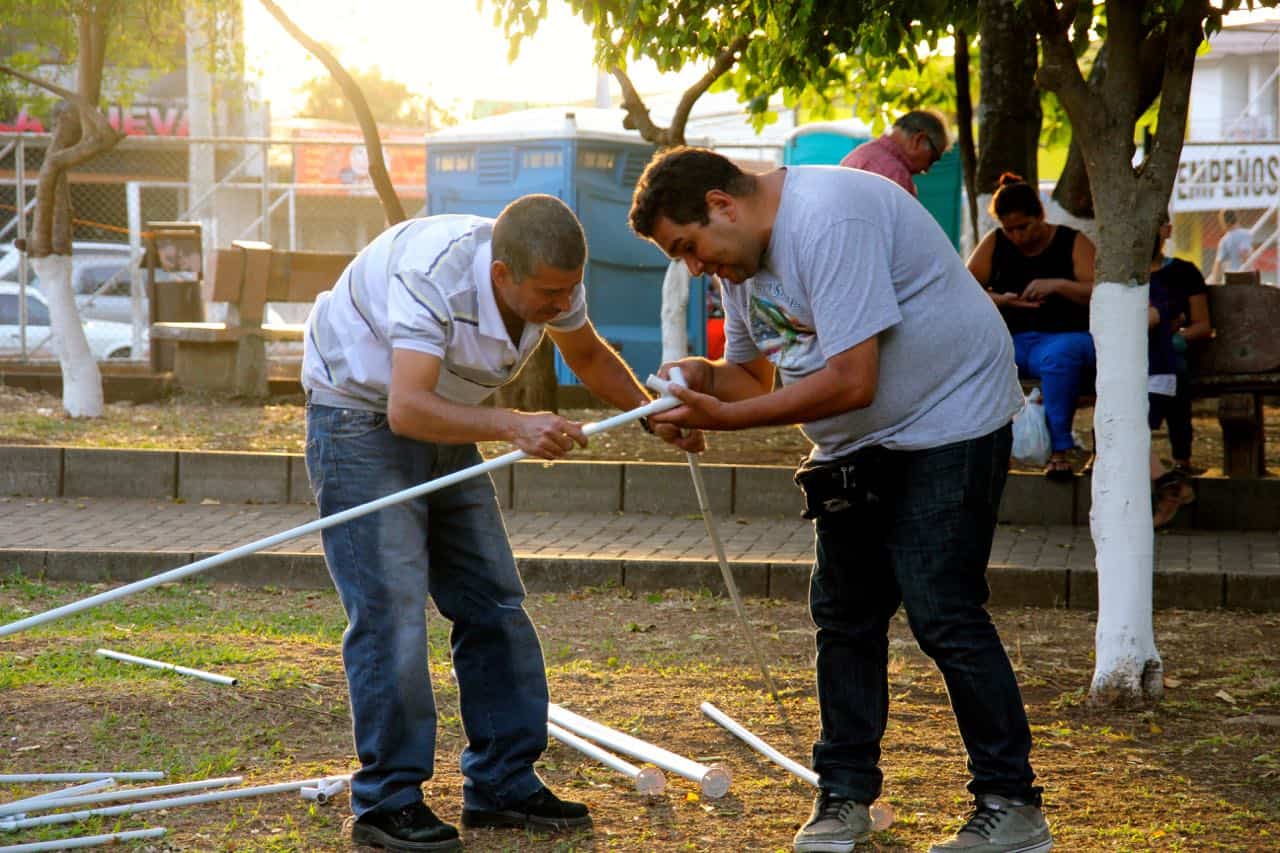 Workers scrambled to set up a tent on the first day of the festival - but their efforts couldn't avert a tidal wave of cancellations. (Robert Isenberg/The Tico Times)

This year’s International Arts Festival has been plenty entertaining so far — just not in the way the Costa Rican government intended. Instead of people mapping out a schedule to squeeze in as much music and culture as possible, they’re gossiping indignantly about how the festival’s organizers could have possibly messed it up quite this badly.

The Culture Ministry announced Monday evening on its Facebook news page that all major headliners for the rest of the festival were cancelled, including Chilean band La Ley and the Argentine rock icon Miguel Mateos.

The ministry said that the artisan fairs scheduled along with the major events were cancelled as well.

The announcement came on the heels of the first disastrous week of the 2015 International Arts Festival (FIA), during which most events were cancelled or reprogrammed. One major venue, in the town of Acosta, was completely abandoned by the organizers.

As the 2015 edition of Costa Rica's biggest arts festival began to unravel, unflattering memes were quick to circulate on social media, on April 27, 2015. (from Facebook)

The extensive arts festival, which has traditionally been a major source of pride for the Costa Rican government — and a hugely popular event among residents of the Central Valley and beyond — massively flopped this year in the midst of major planning flubs and conflicts with contractors and artists.

The Ministry of Culture finally issued an apology on Sunday, three days after cancelling dozens of concerts, workshops and performances with only vague notice to the public.

The minister promised the show would go on through May 3 as planned, with an adjusted schedule, part of which the ministry shared on Sunday. Finally, Fonseca promised to form a commission to investigate why FIA turned into a fiasco and who’s responsible.

But that was before Monday evening’s announcement that all major acts were cancelled. Fonseca was absent from the press conference where two of her vice ministers made the announcement, La Nación reported.

According to the daily, the vice ministers said Fonseca wasn’t there because “she felt exhausted from attending to the press all day.” Vice Ministers Alfredo Chavarría and Luis Carlos Amador also said they had suggested to Fonseca in March that she push back the festival to June, but she didn’t take the advice. They said it was unclear whether the government will still need to shell out compensation for the cancelled international acts  —  La Ley was to receive approximately $200,000 for their appearance  —  or face lawsuits from the bands.

News of the festival’s troubles started to trickle out early last week when artists began complaining about the lack of contracts and limited communication with organizers. A wider public got wind of the problems when, on Wednesday, April 22, two days before the festival inauguration, the company chosen to provide lighting and sound at the major venues pulled out.

The company, LuzArt S.A., said it would be impossible to fulfill the contract since the company hadn’t gotten word that it won the bid until 6 p.m. that same day. A review of documents on the government’s open contracting website, Comprared, confirms that the contract wasn’t awarded until Tuesday, April 21.

In a letter to the Culture Ministry, LuzArt reminded the minister that the government’s original bid offer required the winning company to start setting up the venues on April 19. The company said it would be “materially impossible”  to comply with the contract’s equipment demands and timeline given the truncated timeframe.

LuzArt has a thorny history with this administration. In July 2014, newly-appointed Minister Fonseca asked the Prosecutor’s Office to investigate several programs put on by the Culture Ministry throughout the previous year, including FIA. She said budgets for the events had skyrocketed during the previous administration, under the leadership of former Culture Minister Manuel Obregón (2010-2014). She also questioned the fairness of the bidding process.

In a subsequent investigation, La Nación singled out LuzArt as one of the contractors included in the government’s investigation. The paper also noted that the company had worked for nearly a decade for Malpaís, the band that counts among its members former Culture Minister Obregón and former Vice Minister Iván Rodríguez.

The investigation also showed that, for some of the jobs the government employed LuzArt to do, the bidding process was only open for a few days, and in some cases, only a few hours.

While that’s not necessarily illegal, last year current Minister Fonseca indicated that she would run a more democratic bidding process, and one that cut costs for the government. FIA 2015 was her first big shot to do so.

Even though LuzArt wasn’t officially invited to bid, the company won the contract for this year’s festival after bids from another two companies were rejected: one because it was incomplete and another because it was well over budget. The Culture Ministry set this year’s FIA budget for lighting and sound at ₡55 million (about $110,000). That’s also the amount LuzArt offered in its bid.

LuzArt also took action this year that, while within its rights, added to the delays in the bidding process: It filed an official complaint about the contract and three subsequent requests for clarification on aspects of the contract. The government modified the contract as a result of the complaint.

LuzArt certainly wasn’t the only would-be collaborator to complain about the pre-festival chaos. Artists, musicians and show technicians complained that they hadn’t received contracts and that communication with festival organizers was severely lacking. Many quit out of frustration.

After the proverbial caca hit the fan, the ministry and FIA failed to inform the public, via its Facebook page, about the schedule changes until after several events had already been cancelled.

On the second day of the festival, La Nación reported that a group of disabled adults was left waiting for a puppet show in Acosta that had been cancelled the day before. No one from FIA bothered to show up to tell the public that all shows at the venue had been called off.

Meanwhile, some of the country’s top culture gurus, artists and musicians, including former minister Obregón, have blasted the Culture Ministry — and especially Inti Picado, the man in charge of FIA — for ineptitude.

Critics have lambasted Picado’s lack of experience in producing events, especially major international festivals. Picado, himself a musician with the 22-year-old band El Parque, has publicly said very little about the fiasco in recent days. He was not named in the list of top Culture Ministry officials who officially apologized Sunday for the problems with this year’s FIA.

Angry Costa Ricans have taken to social media to ask Fonseca and Picado to resign. Fonseca has thus far skirted questions from reporters on whether she’ll consider the suggestion, saying she had to concentrate on getting the festival back on track.

Other government entities have tried to distance themselves from the Culture Ministry’s festival flop. ICE, the state-owned telecommunications company and one of the festival’s patrons, said Monday that it was holding off on handing out free tickets to festival concerts at its Kölbi cellphone stores until the Culture Ministry officially announced a revised schedule.

Some shows have gone on

Despite the last-minute schedule and venue changes, some concerts and other events have gone on, and people have shown up to enjoy them. Bands originally scheduled to play in Alajuelita played instead over the weekend at the National Cultural Center (CENAC) in downtown San José. (The Tico Times will continue to monitor the situation in the coming days and provide information about events available for the fair’s second weekend.)

At some venues, artists took to self-promoting their shows in the absence of official help, La Nación reported.

In Acosta, despite being abandoned by FIA, a local group, Colectivo Acosteño, stepped in to put on events there last Friday and over the weekend. They called it a “Cultural Tantrum.”

Still, the damage that’s been done — to the Culture Ministry’s image, to the festival’s reputation, to the artists who had planned to share their work and to the artisans who had counted on selling theirs — won’t be easily fixed.

Opting to move the festival out of central San José and into town and neighborhoods on the city’s margin was a laudable plan. However, the spectacular failure in the execution of that plan seems worse than not having tried in the first place.