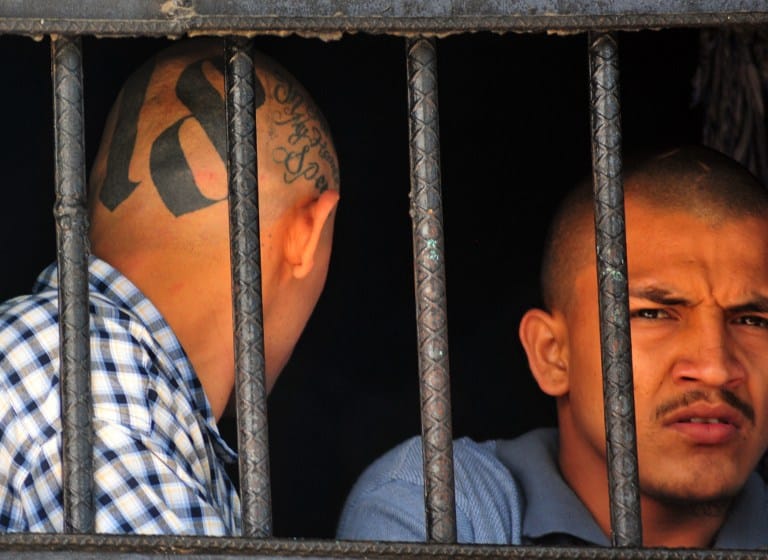 Members of the Mara 18 gang, are pictured behind bars at a prison in San Pedro Sula, 240 km north of Tegucigalpa, on May 28, 2013. Gangs are a driving impetus behind the sky-high murder rates in Central America's "Northern Triangle." (Leonel Cruz/AFP)

WASHINGTON, D.C. – This year’s highly publicized influx of child migrants from Central America via Mexico to the U.S. border has sparked intense debate about the proliferation of gangs in El Salvador, Honduras and Guatemala. But efforts by the three countries to eliminate gang violence have been ineffective and often counterproductive.

Last week, half a dozen experts met Wednesday at Washington’s Hudson Institute to discuss the issue – just days after President Barack Obama announced he would postpone action on comprehensive immigration reform until after the November midterm elections. That was a deeply unpopular decision among Latino activists advocating for children in crisis, said Celina Realuyo, a professor at the William J. Perry Center for Hemispheric Defense Studies at Washington’s National Defense University.

“We’re about eight weeks from midterm elections, and this was a very clear calculation by the president to delay any decision on immigration to buttress support for Democratic candidates in really tight races,” Realuyo said. “My friends are very disappointed, because this is a crisis at our border, and it had been in the headlines until the deterioration of ISIS in Iraq.”

Complicating that crisis is the governments’ inability to put a stop to gang-related violence in the “northern triangle” countries of El Salvador, Honduras and Guatemala.

In the Sept. 10 panel moderated by Jaime Daremblum, director of the Hudson’s Center for Latin American Studies and Costa Rica’s envoy in Washington from 1998 to 2004, speakers roundly criticized the region’s “mano dura” approach to gang violence.

“Back in 2003, El Salvador had ‘Strong Hand Power.’ Guatemala had the ‘Tornado Plan,’ then the ‘Broom Plan’ with which it would sweep the problem away. In Honduras, they had the ‘Zero Tolerance Plan.’ Along with the dramatic titles came some very severe consequences,” said Armando González, chief editor of Costa Rica’s La Nación newspaper.

Police estimate membership in MS-13, Barrio 18 and other maras in El Salvador at about 60,000 – outnumbering the army itself.

“They’ve been jailed by the thousands,” said González. “The response has been almost exclusively repressive. Tougher laws have gone to the point of criminalizing gang membership itself. Populist politicians compete to take tougher stands, and once in power, produce draconian solutions.”

“Guatemala’s minister of justice recently visited El Salvador and said something to the same effect, but political reaction in Guatemala was very strong,” he explained. “And the government had to clarify that it never said what it apparently had said.” As a young girl looks on, police on June 4, 2014 raid a home in the Barrio Abajo district of Tegucigalpa, Honduras where gang members were believed to be residing. Police raids involve an average of 25 officers, but the number can sometimes go as high as 260. Gangs in the Honduran capital constantly battle for control of neighborhoods and the trade in drugs and arms. Photo by Sean Sutton/Panos Pictures for The Washington Post

“He was a poster child for the strong-hand approach, but his firing does not indicate any change in policy,” González said. “This was more a product of international pressure because El Tigre was suspected of ordering summary executions,” including those of minors.

Evan Ellis, a professor at the U.S. Army War College’s Strategic Studies Institute, puts Central American gang membership as high as 70,000. Quoting a recent survey, he said half of all children reported the presence of gangs in their neighborhood.

The problem is far less pronounced in Nicaragua, Panama, Belize and Costa Rica, so the focus is clearly on the “northern triangle” – where almost 80 percent of all small businesses are subject to extortion, particularly those in the public transportation system. The subsequent destruction of economic opportunity further contributes to emigration.

“So does the wave of emigration itself,” said Ellis. “These people carry cash and valuable belongings, so they’re in a high-risk situation while in transit. They’re paying the coyotes to take them, and also becoming easy prey for those who would extort them.” In Guatemala, about 700 people have been killed so far this year for not paying extortion money. The gangs heavily tax human trafficking through Central America, yet police are often bought with drug money – and the policemen themselves often live in the same poor neighborhoods where gangs flourish, making them even more vulnerable.

“Governments often try to impose quick solutions with a lack of resources, like arresting anybody with tattoos. But nobody is going to come forward and testify against them because the people living there are intimidated by the gangs,” said Ellis, noting that in Guatemala, 74 percent of all extortion threats are made from jail using mobile phones smuggled in by corrupt prison guards.

“We’re seeing a new generation of maras, many of whom are sophisticated and without tattoos. These include accountants and lawyers, and infiltrators into the police, and to some degree, the armed forces,” he said.

In El Salvador, the homicide rate fell dramatically after a church-brokered truce between MS-13 and Barrio 18 went into effect in March 2012. That year, El Salvador reported 41.2 killings per 100,000 inhabitants, down from 69.2 per 100,000 the year before. But by February 2013, the truce began to crack and murders started rising again.

Earlier this month, the leaders of MS-13, Barrio 18 and three other Salvadoran gangs – Mo Mao, Maquina and Miranda Locos 13 – offered to stop attacking police and military targets if the government would provide support to church and civil group mediators who could facilitate dialogue and prevent conflicts among the rival gangs.

Despite its poverty, Nicaragua has managed to steer clear of the gang problem.

“Nicaragua is the poorest country in Central America, but remarkably we have the lowest murder rate, together with Costa Rica,” said Bosco Matamoros, former Nicaraguan ambassador to Spain and Sweden. “In the 1980s, Nicaragua, like El Salvador, experienced a civil war in which both countries were involved in the confrontation between East and West. But there are no maras in Nicaragua because of the relationship Nicaraguan police have with the community, which is proactive instead of reactive.” Jaime Daremblum, senior fellow and director of the Hudson Institute's Center for Latin American Studies, served from 1998 to 2004 as Costa Rica's ambassador to the United States. Larry Luxner/The Tico Times

Instead, Matamoros said, the region needs a long-term plan that offers at least $10 billion over a five-year period for development and education.

“CARSI does not offer a solution for Central America. It represents $3 per capita in a region of 45 million people,” he complained. “It’s basically irrelevant. It doesn’t offer job creation, access to education that our region needs.”

The Nicaraguan ex-diplomat added: “We view the drug problem as oriented by demand from the United States. As long as there’s no integrated approach, we’ll continue to follow the security approach. Continuation of the war on drugs, with an emphasis on security, is threatening the stability of the region. Central America needs a more serious engagement by the U.S. based on the concept of shared responsibility.”