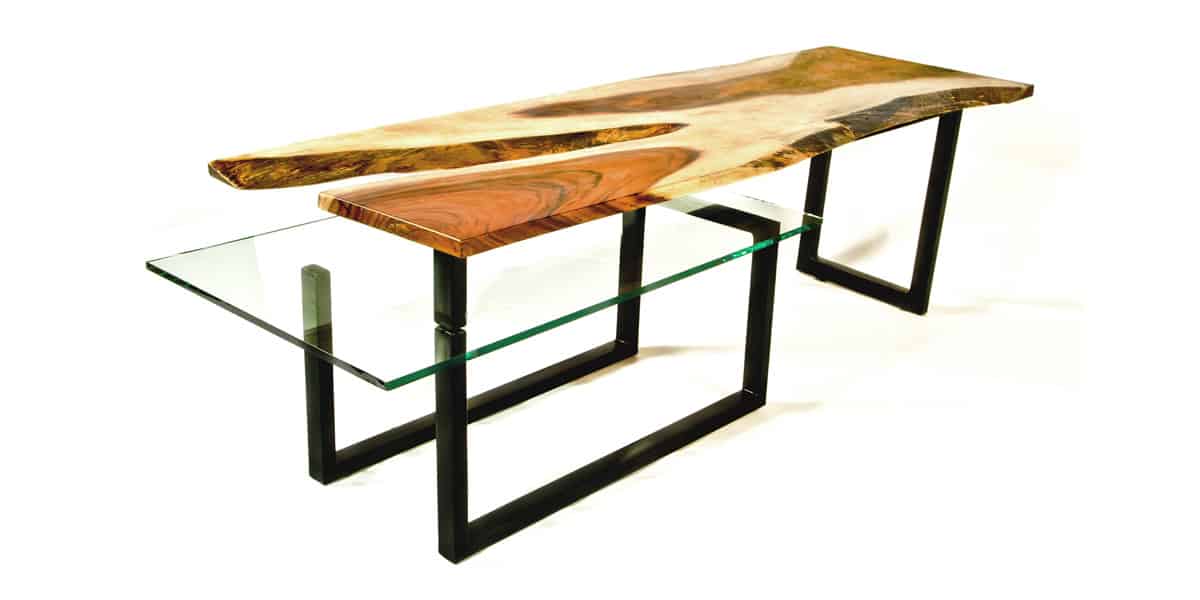 What began as storm debris has transformed into works of decorative art. (Courtesy Bernardo Urbina)

One family’s debris from a massive tropical storm can become another family’s luxury furniture.

It all began with a natural disaster: Bernardo Urbina was standing in a Philippine airport when the earthquake hit. At first he thought the vibration was a plane taking off, but then the walls swooned, and the ceiling began to fall apart. Travelers screamed and scrambled for the exits. When the earthquake quieted, chaos ensued: Passengers had to pass through security checkpoints a second time, and flights were delayed interminably.

“It was a tiny airport,” Urbina recalls. “Maybe the size of [Daniel Odubar Airport in] Liberia.”

Urbina is an industrial designer who grew up in Costa Rica, and after long stints in the United States and Italy, he has spent about a year in the Philippines. Since arriving there, Urbina has weathered both a severe earthquake and Typhoon Haiyan, the most catastrophic storm in the nation’s history. He spent the night with six friends in an apartment, listening to torrents of rain batter the roof. “There was a lot of wind and rain, but I didn’t experience the hardest part of the storm,” he says. “I compare it to one of the big rains in Costa Rica. But when I went up north, I saw that everything was destroyed.”

The problem with hurricane damage is twofold: First, the storm razes buildings, and residents lose their shelter, belongings and capital. Second, mountains of debris have to be cleared in order to rebuild. Haiyan was particularly extreme: The storm killed more than 6,000 people, entire cities were leveled, and the BBC declared certain regions a “war zone.”

But the devastation also reminded Urbain of an idea he once had. For years, when Urbina would briefly return to Costa Rica, he would see rubbish in the streets, much of it raw material that could be reused. “I always wanted to make furniture out of the scrap wood that’s just lying there,” he says. After Haiyan, Urbina visited Tacloban, a Philippine city that had been largely leveled in the storm. He saw an opportunity – not only to recycle the rubble, but to help earn money for the typhoon’s victims.

The result is Tacloban Prevails, Urbina’s new furniture company. Instead of mass-producing tables and chairs, Tacloban Prevails manufactures one-of-a-kind pieces out of debris, and a percentage of the profits go back to the family that supplied the scrap.

Urbina studied industrial design in the United States and then worked for several years in Milan, Italy. His aesthetic sensibility is clearly modernist: Urbina prefers the square angles and streamlined design that have made iMacs and Ikea furniture so popular around the world.

Yet Urbina’s life still seems informed by Tico values. When Filipino friends living in Italy said they had to return to their home country, they invited Urbina to join them, and he decided to make the move. He wanted to escape the manic pace of enormous “design cities” Milan and New York City. Although it was never Urbina’s plan to get stuck in a hurricane or typhoon, Tacloban Prevails has given him the chance to help a desperate community, open his own business and experiment with new designs. Each piece combines natural-looking woods with glass or metal, an interaction between organic and industrial materials that has become popular among high-end furniture collectors.

Originally Urbina hoped to build the actual furniture close to the hurricane damage, thereby employing storm victims, but logistics made that plan too difficult. “[The area] is still really affected by the typhoon,” he says. “There’s no electricity, and the machines aren’t there yet.” Instead, he must outsource labor to a company globally recognized for building furniture. Through the company’s website, the furniture will soon be available for purchase almost anywhere in the world.

For now, the Philippines have given Urbina a strong sense of belonging and purpose.

“It’s a little bit like Costa Rica, in the sense that there is Spanish cultural influence,” he says. “The layout of the cities, the cars and everything, are really similar. People are really foreigner-friendly here. Life is really simple. I like it. For me right now, it’s better.”