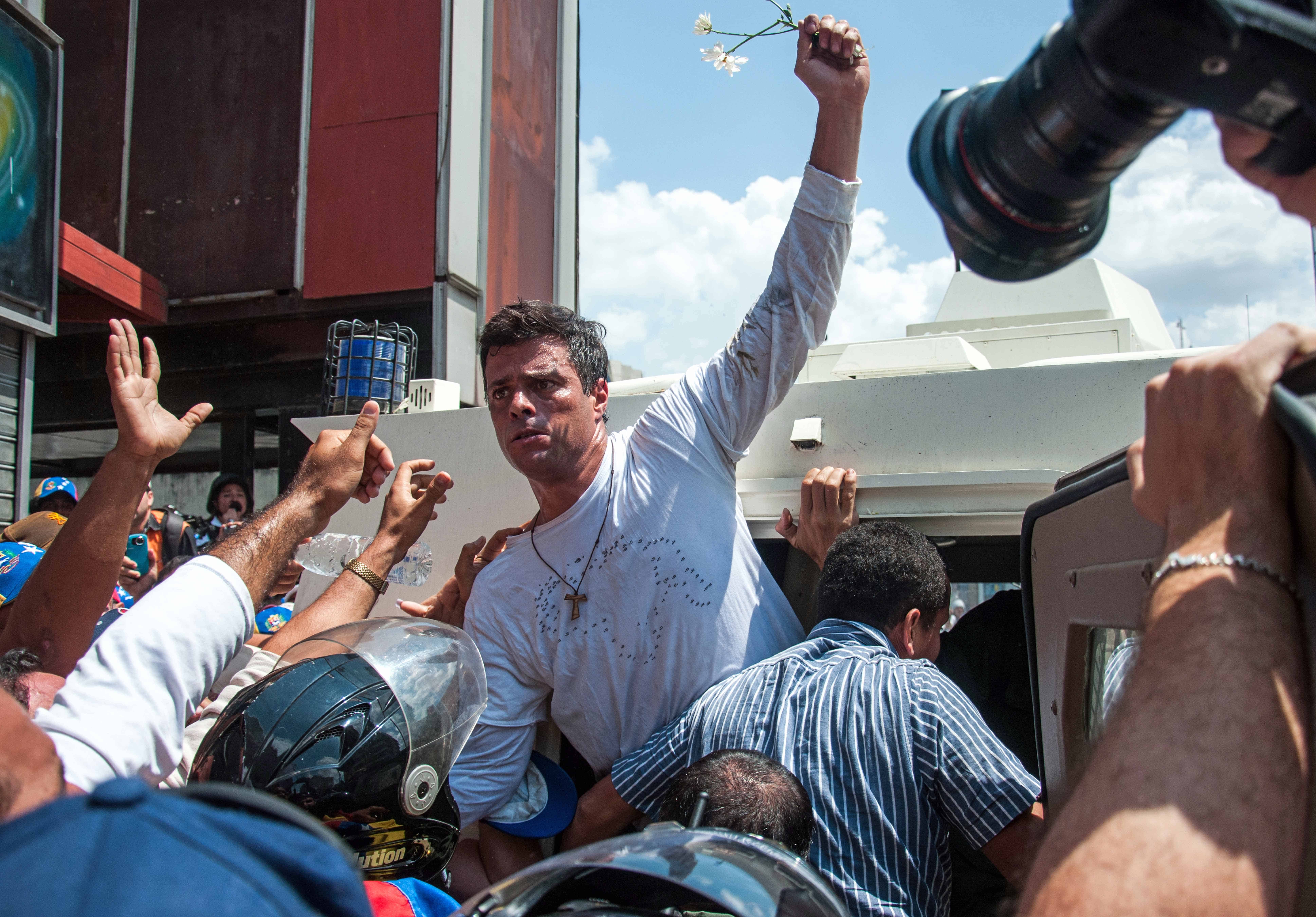 Leopoldo López, center, an ardent opponent of Venezuela's socialist government, is escorted by the National Guard into a vehicle after he turned himself in on Feb. 18, 2014. (Cristian Hernández/AFP)

CARACAS, Venezuela – Leopoldo López, a Harvard-trained politician and ardent opponent of Venezuela’s socialist government, is seen by enemies and supporters alike as the face of recent street protests against the regime.

López clasped the hand of his wife, Lilian Tintori, and exchanged a few quiet words with her before turning himself in to authorities at a tumultuous rally in Caracas on Tuesday.

A former mayor of the wealthy Chacao borough of Caracas, López had been targeted as public enemy number one by the government, as it hit back against the latest round of high-stakes protests this week.

López, for his part, said he was turning himself in after several days as a fugitive from authorities in a gesture of sacrifice for the public good.

“If my incarceration serves to wake up a people, … my infamous incarceration will have been worth it,” said the 42-year-old Harvard-educated economist, minutes before surrendering to the National Guard.

Blessed with matinee-idol good looks and an easy smile, López has a strong following in parts of Venezuela, winning his past elections by comfortable, and even overwhelming margins.

He has a long history of activism in the country’s anti-socialist opposition, having been at the forefront of demonstrations in April 2002 that led to a coup that briefly ousted then-President Hugo Chávez.

A child of privilege, López received a good deal of his education in the United States.

He went on to get his master’s degree at Harvard’s Kennedy School of Government in Cambridge, Massachusetts.

López is considered brash and ambitious — dangerous attributes for his foe Maduro, 51, Chávez’s handpicked successor, who is deemed by many Venezuelans to be somewhat charisma-challenged.

The Maduro government is grappling with angry student protests orchestrated at least in part by López that began in the interior of the oil-rich country and boiled over into street clashes in Caracas.

Supporters of Venezuelan opposition leader Leopoldo López hold a protest in front of the Justice Palace, on Feb. 19, 2014, in Caracas. Raúl Arboleda/AFP

López’s staunch opposition to the government dates back to the regime of late firebrand President Chávez, who in 2011 barred him from holding political office for three years.

It was the second period of political banishment for López: The government also accused him of influence peddling while working in 1998 as a manager at the Petroleos de Venezuela (PDVSA) state oil company, and in 2008 barred him from holding public office for one year.

López served two terms as mayor of Chacao from 2000 to 2008. During that time he was dogged by allegations that he had misappropriated public funds. He has rejected all of the charges against him as political persecution by the Chávez regime.

After being expelled as leader of the Un Nuevo Tiempo party (“A New Time”) which he had joined in 2007, López in 2009 created his center-right Voluntad Popular, or “People’s Will” party.

The party has been front and center in leading the demonstrations that have roiled Venezuela, which has been deeply divided in the aftermath of Chávez’s death and Maduro’s unsteady stewardship of the economy.

The demonstrations have sprung up amid growing public discontent over rising crime and a worsening economy, despite Venezuela having the world’s biggest proven oil reserves.

Maduro has accused “right wing fascists” — of whom he considers López the ringleader — for the recent unrest.

Under the slogan “the way out,” López and other opposition leaders have pushed for anti-government protests to force a “constitutional change.”

There is no provision for recall elections until April 2016, and Maduro, who was elected in April 2013, has said he will never resign.

The country’s other leading opposition figure, Henrique Capriles — a candidate in Venezuela’s last two presidential elections — although equally opposed to Maduro, has warned that conditions are yet not ripe for a change of government.

The protests flared on Feb. 4, when students at a university in the western state of Tachira staged a demonstration against rampant crime after a student was raped.