Guatemala: Konojel center takes on malnutrition with meals for the hungry 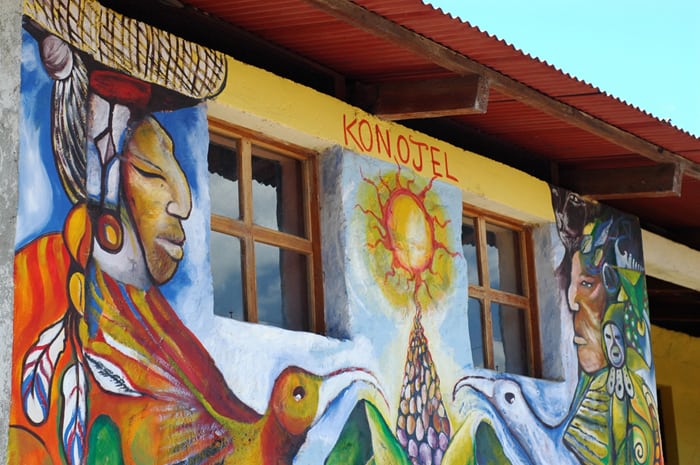 As 1 million Guatemalans face a food emergency in the drought-hit countryside, the U.N. warns that the country’s already high child malnutrition is increasing. But at the Konojel Community Center on a sunny Monday afternoon, two dozen primary-schoolers are laughing and chattering as they play games on Android tablets and tackle homework problems with the help of volunteers. Having just finished a lunch of breaded broccoli with salsa, rice and salad, the kids are alert and engaged as they participate in Konojel’s after-school program.

Founded in 2011 in San Marcos La Laguna, a town of roughly 3,000 Kaq’chikel Mayans on the shores of Lake Atitlán, the center started as a place where the town’s most malnourished inhabitants could eat one healthy, filling meal each day. Now Konojel (which means “all together” in Kaq’chikel) includes not only a lunch program that runs on fuel-efficient technologies, but also enrichment activities for children and job training for local women.

“We’re not looking to feed the whole town,” says Andrew Raphael, who co-founded Konojel with two friends after living and working in San Marcos as a Spanish teacher. “We’re looking to create programs that allow people to raise their standard of living.”

Nonetheless, Konojel’s lunch program has become a key resource in an area where nearly 70 percent of children grow up malnourished. Under the guidance of Maria Mejia, who manages Konojel’s daily operations, the center solicits recommendations from the local health center and family court for pregnant and breastfeeding mothers, elders and young children who are unlikely to receive adequate nutrition at home.

“People in town know that we’re here and they can ask for help,” says Mejia. “Now when the children leave here, they don’t want to go home.”

“When they’re not getting this meal, they basically just eat tortillas,” adds Raphael. “It provides some relief for the elderly, but for the babies it’s life or death.”

However, cooking a balanced meal for more than 70 people a day poses problems. In Guatemala, where most ovens and stoves still use firewood, cooking large quantities requires enormous amounts of fuel. The program’s initial funding, a private monthly donation from an expat couple, ran out within a year.

In early 2014, an Austrian backpacker passing through San Marcos offered to show the center’s staff how to build a rocket stove, which uses a simple, high-temperature combustion chamber to increase fuel efficiency and reduce emissions. Within a few months, Konojel was 400 percent more fuel-efficient, using half the amount of firewood to cook twice as much food. That same year, a nonprofit in the nearby town of Panajachel offered to build Konojel a solar oven and solar dehydrator, which now employ three women in the making and selling of beef jerky.

In addition to the dried food cooperative, the center trains local women to work in restaurants and cafes in the heavily touristed towns around the lake. Elia, a 29-year-old mom who is part of the current kitchen team, says she has learned to make everything from pasta with homemade pesto to soups and vegetable dishes while cooking for the center’s lunch clients.

In November, Konojel will open a restaurant of its own where tourists can stop in for a traditional Guatemalan meal. Raphael hopes that the profits from the restaurant will completely fund Konojel’s programs. In the meantime, a 16-year-old from Long Island, Robert Subtirelu, recently donated $7,000 he had earned boarding dogs to cover the center’s after-school classes for the coming year.

“Where I grew up and the opportunities I have had, in a way makes me feel angry that not everyone is able to do the same thing,” Subtirelu says. “The next step is to send the kids onto high school and internships so that they can come back to San Marcos and improve the community themselves. Konojel is putting the power into their hands.”