Fishermen, NGOs and government at odds over Cocos Island and 30/30 Plan 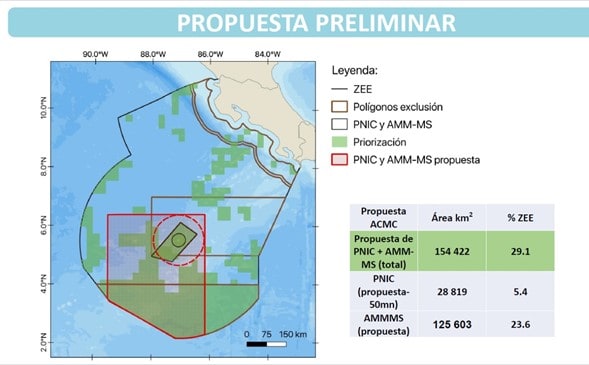 A plan is on the drawing board for the expansion of the Cocos Island Marine National Park and meetings for that and the 30/30 plan have started. Different sectors are light years apart on some sort of agreement of the plan.

Launched in January 2021 at the One Planet Summit for biodiversity, the High Ambition Coalition (HAC) for Nature and People, which is co-chaired by Costa Rica, France and the United Kingdom, brings together over 50 governments from across six continents aiming to secure a global agreement to protect at least 30% of the planet’s land and at least 30% of the planet’s ocean by 2030 at the Convention on Biological Diversity COP15, which will be held this year in Kunming, China.

I have had the fortune of living in this beautiful country 30 years working in sport fishing, becoming a citizen, having a Costa Rican wife and children, I have been observing many ocean related causes over the years. The following is my own personal opinion and not necessarily the opinion of any organization or club I may be a member of or affiliated with. I have also learned over the years that many people take things personally when debating on differences of opinion so I will leave names out of this piece.

One attorney represents the tuna industry, longline fleet, artisanal fleet and claims to represent the entire tourist charter fishing and sport fishing fleet in this issue.. They are 100% opposed to the expansion of the Cocos Island and 30/30 plan. They are presented as one big happy family who together are opposing the NGO’s and government. They had a Facebook Live debate to show their unity. The reality is they are constantly at odds with each other.

I have only seen them really work together once back in 2013, when the longline fleet teamed up with the sport fishing fleet to move the foreign tuna fleet from working just 12 miles off the coast to 45 miles. Other ocean polygons were created protecting 200,000 square kilometers from tuna purse seiners. Both sectors agree the polygons are working. Production increased in those areas.

The sport fishing fleet has seen a recovery of yellowfin tuna that make Costa Rica now a premier destination for that fishery. One of the leaders of the commercial fleet has been successfully fishing green stick for tuna (a method of trolling with almost no bycatch) Tuna also have a higher market value than many other species caught on conventional longline gear. He claims he does really well until a purse sein boat moves in and wraps up all the tuna, then he is forced to go back to setting miles of hooks in the water.

Sport fishermen claim the longline sector abuses the 15% incidental catch on sailfish allowed by the government and actually kills much more than that and the longline fleet claims if the tuna purse seiners didn´t kill so many of their target species as bycatch, they would have no interest in sailfish. There is also discord in the sport fishing sector.

One part of the sport fishing sector stated that they are not against some type of management plan if the plan would be presented before the area is protected. Historically the government chooses and area to protect and afterwards does a management plan which usually leaves the fishermen short on options. This part of the sport fishing group said how about present the plan first, then everyone can decide if it if fair to fishermen and the environment.

The attorney, the head of the longliners, and the representative of the mollusk fishermen asked for the representative of sport fishing who said ocean management was ok if not done secretly be removed from the meeting. Seems you can be part of the family only if you agree with them. To keep peace, the Vice Minister asked them to leave.

They also all gathered together and exchanged ideas. All are in favor of the protected area expansion but differ somewhat on how. Some want them to be 100% no take which means no fishing allowed and other believe in a management plan that allows sustainable fishing practices in some areas.

Costa Rica’s historic inability to police their protected areas makes the whole process more difficult. Many believe no take is the only way to go. If no one can use it, “it’s protected” has always been the train of thought. The truth is it is like taking a kinder class and the teacher hangs a big fat piñata in the middle of the room and gives them a bunch of sticks and tells them nobody can touch it and leaves the room. In short time there is one kid with a pocket full of candy and rest feel it is only fair to get theirs too.

We all know 30/30 in some form is going to happen. Not only is it an initiative of 50 countries but Costa Rica is one of the sponsors. The year 2030 is still a ways off and there is time to do it correctly, not rush a plan that looks good on paper but really does not accomplish responsible ocean management. The first step is to get the congress to finish the tuna reform bill and move the tuna boats out to at least 80 miles.

Things will not get any better for the fishing sectors if you don’t. Then have the three groups honestly sit down and negotiate a compromise where all sectors can achieve the goal of using the ocean responsibly for the good of the fishermen and the ocean. Wouldn’t that be nice?