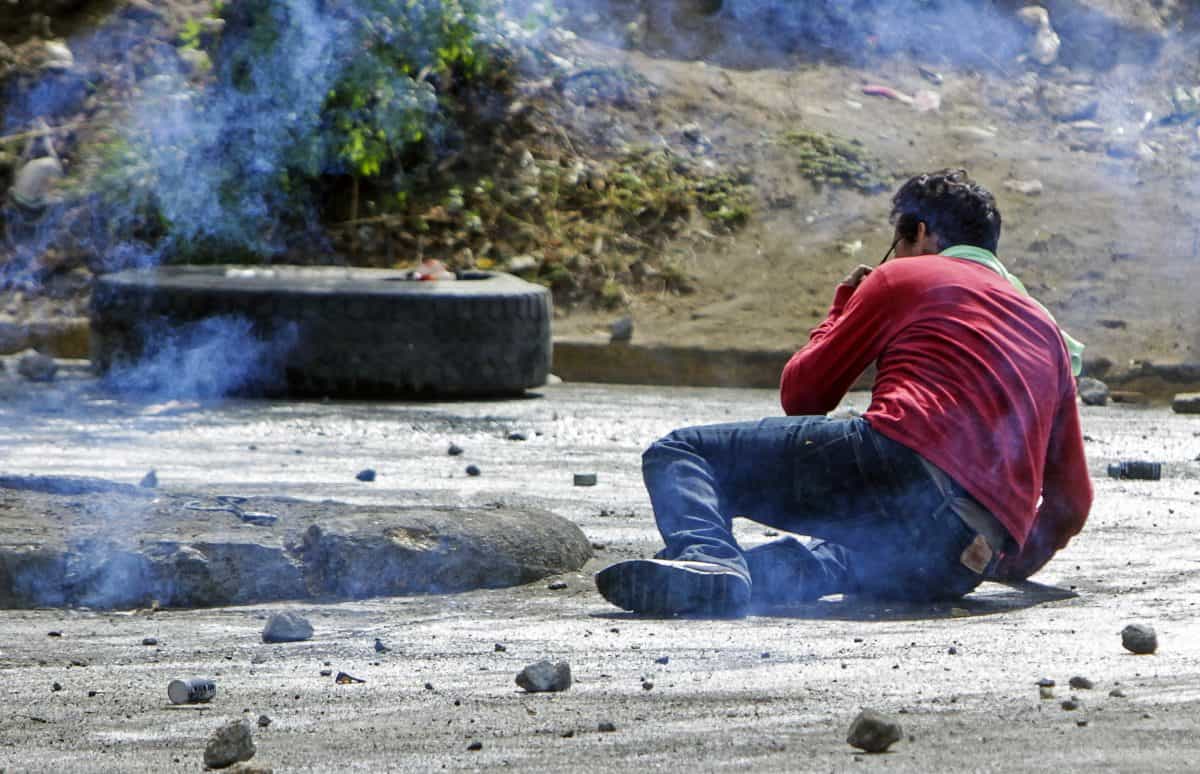 A student falls after receiving a shot from a rubber bullet in Managua, Nicaragua. (Inti Ocon / AFP)

“They are oppressing the civilian population using semi-automatic weapons, under the protection of the police themselves,” said Amnesty’s Americas director Erika Guevara-Rosas.

At least 87 people have been killed and almost 900 wounded since protests began on April 18 against Ortega and his party, the Sandinista National Liberation Front (FSLN).

The Amnesty report, entitled “Shoot to Kill: Nicaragua’s Strategy to Repress Protest,” said the armed mobs were often made up of pro-government students and motorbikers, sometimes identifiable by clothing linking them to the authorities.

“These pro-government armed groups were apparently used by the government to generate disorder, make threats and carry out attacks, including some that may have proved fatal,” said the report.

“These groups appear to be acting with the acquiescence of the state, as is demonstrated firstly by the fact that most of the attacks were committed by private individuals in the presence of or in coordination with the security forces and, secondly, by the fact that the police did not pursue the perpetrators after the crimes were committed, but rather allowed them to flee the scene and disperse,” it added.

Guevara-Rosas told AFP that while repression had become the “common denominator” of the government’s response to protests, “we had never documented such a violent and radicalized situation, with groups that are clearly in collusion with the state authorities.”

“Sadly, we see a perverse parallel in that a president who in the 1980s fought against the dictatorship of (Anastasio) Somoza – which also used repressive measures that cost many lives – is now a political leader using a systematic policy of violence against a citizenry that opposes him,” she said.

The Amnesty report said that on the very first day of protests, security camera footage appeared to show riot police bringing in two truckloads of rocks and distributing them to pro-government groups to hurl at demonstrators.

The protests that broke out in April were initially triggered by now-aborted reforms to the near-bankrupt social security system, but the unrest quickly broadened into a rejection by many Nicaraguans of Ortega and his wife, Rosario Murillo, who are seen as autocratic.

Ortega, a former Sandinista guerrilla who first ruled between 1979 and 1990 before returning as president 11 years ago, has kept power by maintaining leftist rhetoric while ensuring an accommodation with powerful private industry and keeping up trade with the United States.