We all heard it.

University students and protesters across Nicaragua stood up against the country’s increasingly authoritarian president, Daniel Ortega, and the world stopped to listen.

Since his reelection in 2006, Ortega squeezed rights, speech, and money away from a seemingly dormant population for over a decade, but in late April, people bit the hand that squeezed.

What did it was one of the softer squeezes the people had suffered under Ortega. It was a 1.6 percent rise in social security contributions and a 5 percent cut to pension collectors. But it was a pension system Ortega and other government officials had been accused of taking multimillion-dollar loans from. It’s a government that consists solely of Ortega’s party, the Sandinista National Liberation Front (FSLN), since he’s ousted all opposing parties since taking power.

It’s also a government where his wife is second in command. Ortega chose his wife, Rosario Murillo, as his running mate during his 2011 reelection campaign. It was an election where his name wouldn’t have been on the ballot at all if he hadn’t overridden the constitution to allow him to serve indefinitely. The elections were also riddled with claims of electoral fraud.

Ortega helped overthrow Anastasio Somoza in 1979, ending a 50-year old dynasty built with brutal oppression and secret police. Ortega and the democratic socialist FSLN claimed they’d bring a new dawn for the working class of Nicaragua. Instead, he brought more of the same, and a civil war between Ortega’s government and the U.S.-backed Contras broke out soon after. After years of war, the Central American Peace Accord led to Ortega losing the 1990 presidential election to Violeta Chamorro, the former owner of La Prensa who took the paper over after her husband was assassinated in 1987.

After losing those 1990 elections, the FSLN focused on taking back power by taking over the streets.

Reporters from La Prensa told me how the FSLN organized all the protests during the presidential administrations of Violeta Chamorro, Arnoldo Alemán and Enrique Bolaños. To show strength, to negotiate, to flex their muscles, they’d hit the street. After they gained power, they’d used that strength to send their forces to beat up anyone who protested.

Aside from repressing protests, Ortega and his family bought newspapers, websites and news stations throughout Nicaragua. Giant billboards line the country, emphasizing Ortega and Murillo as socialist and Christian heroes.

Murillo led an initiative to install over 130 metal trees throughout Managua to celebrate an anniversary of the FSLN revolution and beautify the city. At $25,000 a piece, they cost the second-poorest country in Latin America $3.5 million dollars to install and are a constant drain on electricity, with over 15,000 light bulbs in every tree.

Let them have trees.

Official media – what state-owned media are called – downplay criticism, ignore inconvenient facts and always portray the government in a good light. They muddy the water enough so that lots of people aren’t sure what they’re seeing.

They tried again when the protests broke out, arguing that violence and deaths were caused, not by the government, but by gangsters, far-right activists, and outside agitators.

Students, people shot protesting the deaths of other students, journalists: all delinquents. The government shut down several TV stations in the first few days of protests. Other reporters were robbed, beaten and harassed. Several of the reporters I talked to said a lot of the aggression came when they were photographing the Juventud Sandinista, the FSLN’s youth group, or police attacking protesters.

You can’t tell the world you don’t know who started the fire when there are photographs of you with matches in your hands. Ortega had been slowly silencing journalism in Nicaragua for years.

“We’d say that in other parts of Central America they were physically killing journalists,” said Elizabeth Romero, a reporter for La Prensa. “Here they kill you civilly. They’ve built a barrier against independent journalism. We don’t have access to official information and you can’t go to any government activity, big or small.”

Romero says their court reporter hasn’t been allowed in courtrooms for months. Then that civil silencing turned into a fist during these protests.

I drove around with reporters from La Prensa on the fifth day of protests. The day after one of the most violent protests. Dozens were dead, a journalist had been killed, and more protests had been called for that day. Ortega said he was going to address the nation.

None of the big scheduled protests were going on. There was sporadic looting taking place throughout the city. It was hard to tell what state the streets were in or whom they belonged to. Every route to the main protest at the Polytechnic University was closed, unofficially. Some had barricades manned by rock- and machete-wielding groups of men. One threw rocks at us when they saw cameras.

Other roads had lines of cops blocking our passage. The long way around, through a dirt road east of the airport, was also blocked. They let us through the first blockade, but further down, a fight was breaking out and reinforcements were running in.

The calm streets had unmanned barricades with cars driving on the sidewalk to get around them, or a simmering pile of ash from the tire fire the night before. It became clear who owned the streets after Ortega came on national television to announce he was rescinding the social security reforms.

We went to Masaya, where another protest was scheduled. Jader Flores, a photographer for La Prensa who’d been documenting some of the biggest clashes, said that’s where one of the first April protests happened. The Sandinista Youth came and beat up protesters a few blocks down.

But the Sandinista Youth didn’t show up that Sunday. Dozens of protesters turned into hundreds by sunset. They weren’t protesting reforms anymore – they were celebrating democracy. The people had spoken and the government listened. It was the closest thing the country had had to an electoral victory in over a decade.

They’d been heard, but they had a lot more to say. The chants compared Ortega to Somoza; protesters read the names of the fallen students over and over again; they demanded that imprisoned be set free. Most of all, they were calling for Ortega to resign.

“Mi gobierno es asesino,” one kid, no more than 10, repeated to himself as he was walking to a car with his parents. My government’s a murderer. His mother cracked a smile but told him not to say that.

As much as Ortega tried, the word is out. Children know, parents know, the country knows. The liberator oppressed. The regime will kill.

“This isn’t a table for dialogue,” said Lester Alemán, the leader of the university coalition told Ortega during the first day of the peace dialogues. “This is a table to negotiate your exit.”

A hero of the people is nothing alone. Ortega has lost the streets. Ortega’s lost the people. Ortega will lose Nicaragua. They’re caught in the middle of their metallic forest fire – now it’s up to Ortega and Murillo to see who they’ll take down with them. 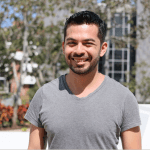 Alexander Villegas: Born in the United States, raised in Costa Rica, and educated in Canada, Alexander is a freelance journalist and photographer focusing on under-reported issues across Latin America. Alexander’s stories and photographs have appeared in the Guardian, CBC, the Tyee, Bluff, Hakai Magazine and Smithsonian Magazine, and others. His reporting in Nicaragua for this story took place from April 21-23, 2018.