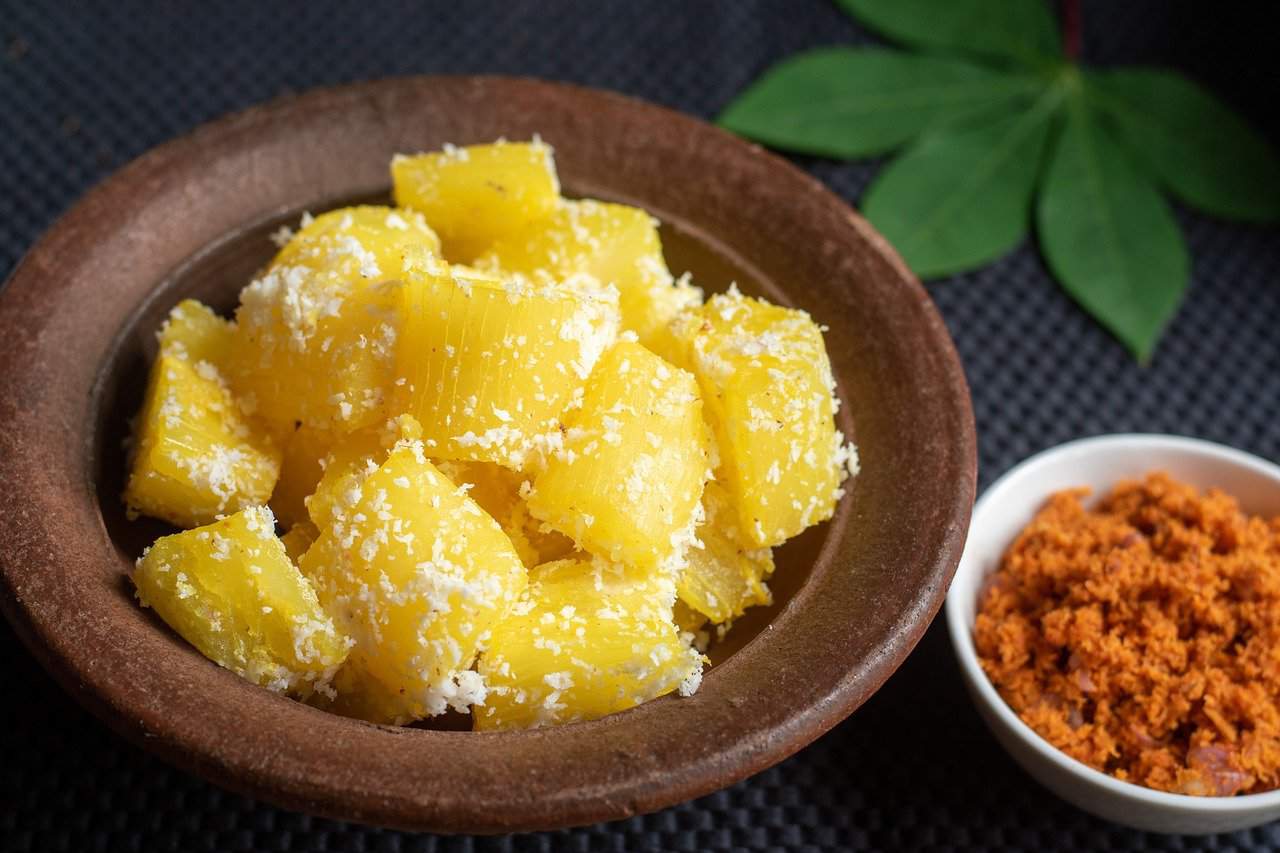 Yuca, cassava, mandioca and manioc are all common names for one of the most important staple food crops in the tropics around the world.  Originally from South America, cassava is believed to have been first domesticated in Brazil.

Then archeologists discovered cassava pollen at the 1400-year-old Mayan site Joya de Cerén in El Salvador, indicating the migration of this plant northward through Mesoamerica and the Caribbean region. The Spanish and Portuguese continued the cultivation of this staple root crop and even introduced it to the Old World tropics.

Today, Africa, Asia and Latin America are the biggest producers of this root crop. By the way, if you ever wondered where tapioca comes from… it’s made from cassava! Costa Rica exports about 2% of the world’s production to the north, mainly for immigrants. Costa Ricans are no exception. Here, it’s called yuca, and it’s usually served fried as boiled alongside typical casados.

Tropical gardeners would agree that yuca has to be the easiest crop to grow here. It grows well on tropical soils with low fertility, resists drought conditions like those we now have in Costa Rica, and has few pests. It’s a real survival specialist. Local campesinos plant yuca in March and April before the rains begin using stem cuttings from mature plants that measure approximately 30 centimeters in length.

It’s important to obtain stem cuttings from plants that have been selectively bred with “sweet” tubers. These varieties have white stems and green leaves. Wilder, “bitter” varieties have brown stems and purple-tinted stems and leaves.

Cuttings are planted in well-tilled soil at a 45-degree angle. buried about halfway in the soil. As the rains begin, the cuttings root and produce foliage rapidly. Care must be taken to keep the young plants weed-free and the soil cultivated around the main stem. Although yuca grows in poor soils, applications of compost or other foliar fertilizers increase vigor and production of the tubers, which are ready to harvest in nine months.

That’s when the treasure hunt begins. Yuca plants can be pulled up by their long main stems. This tug-of-war is easier with four hands than just two! Slowly, the plant gives up, and impressive roots the size of your arm or leg begin to emerge from the earth.

Back in the kitchen, clean the roots and peel the bark-like outer skin away from the white center. Yuca is very perishable, so it’s good to divide up the treasure for various meals and store it in the freezer until needed.

Inside the yuca root there’s a small center stem which is best removed before or after cooking.  In many cultures the peeled tubers are soaked in cold water for several hours to make them “sweeter.”

You see, wilder varieties can have traces of cyanogenic glucosides and must be prepared properly before eating, while sweet cassava can be used simply by boiling the roots until they are soft and discarding the water they are cooked in. Improper preparation of bitter cassava can leave enough residual cyanide to cause intoxication.

This commonly occurs when people depend primarily on wild yuca and lack a wide variety of foods in their diet.

For years when first arrived in Costa Rica, I wouldn’t eat yuca for this reason. “Cyanide?” I thought. “Yeow…not for me.” Then I came across some very interesting studies on vitamin B17, which is another organic cyanogenic glucoside and has been successfully used in alternative clinics for healing cancer.

There is a group of these “forgotten foods” that contain small amounts of these compounds. Apricot kernels, apple seeds, flax seeds and flax seed oil, wheat grass, and cassava are a few of these. In small quantities, these substances help the body’s immune system to eliminate abnormal cells.

We serve yuca occasionally at home alternating with other tropical root crops such as sweet potatoes, taro and potatoes. Cassava roots are very rich in starch and contain significant amounts of calcium (50 mg/100g), phosphorus (40 mg/100g) and vitamin C (25 mg/100g). However, they are poor in protein and other nutrients.

Here are two of our favorite recipes.

Peel one medium-sized yuca root and cut it into 3-inch sections. Cook until the yuca is soft, then drain the water. Take out the small stem inside each section. Add a small amount of milk or water and begin to mash the roots with a potato masher or blend in blender until its texture is smooth. Add sea salt and pepper to taste.

Peel one medium-sized yuca root and cut it into 3-inch sections. Cook until the yuca is soft, then drain the water. Take out the small stem inside each section. Now place the yuca in a blender and add water or milk along with chopped onions, garlic and sea salt.  Blend until the soup has a smooth and even consistency. Optional: add cooked pejibayes and blend with the other ingredients to create a gourmet campesino soup.

For more information on tropical home gardening click on our monthly newsletter. We have books and seeds to share with you.  Until next time – life’s a garden.

Previous article
PHOTOS: Every Costa Rica sloth image you will ever need to see
Next article
Sloth Kong swings from the trees