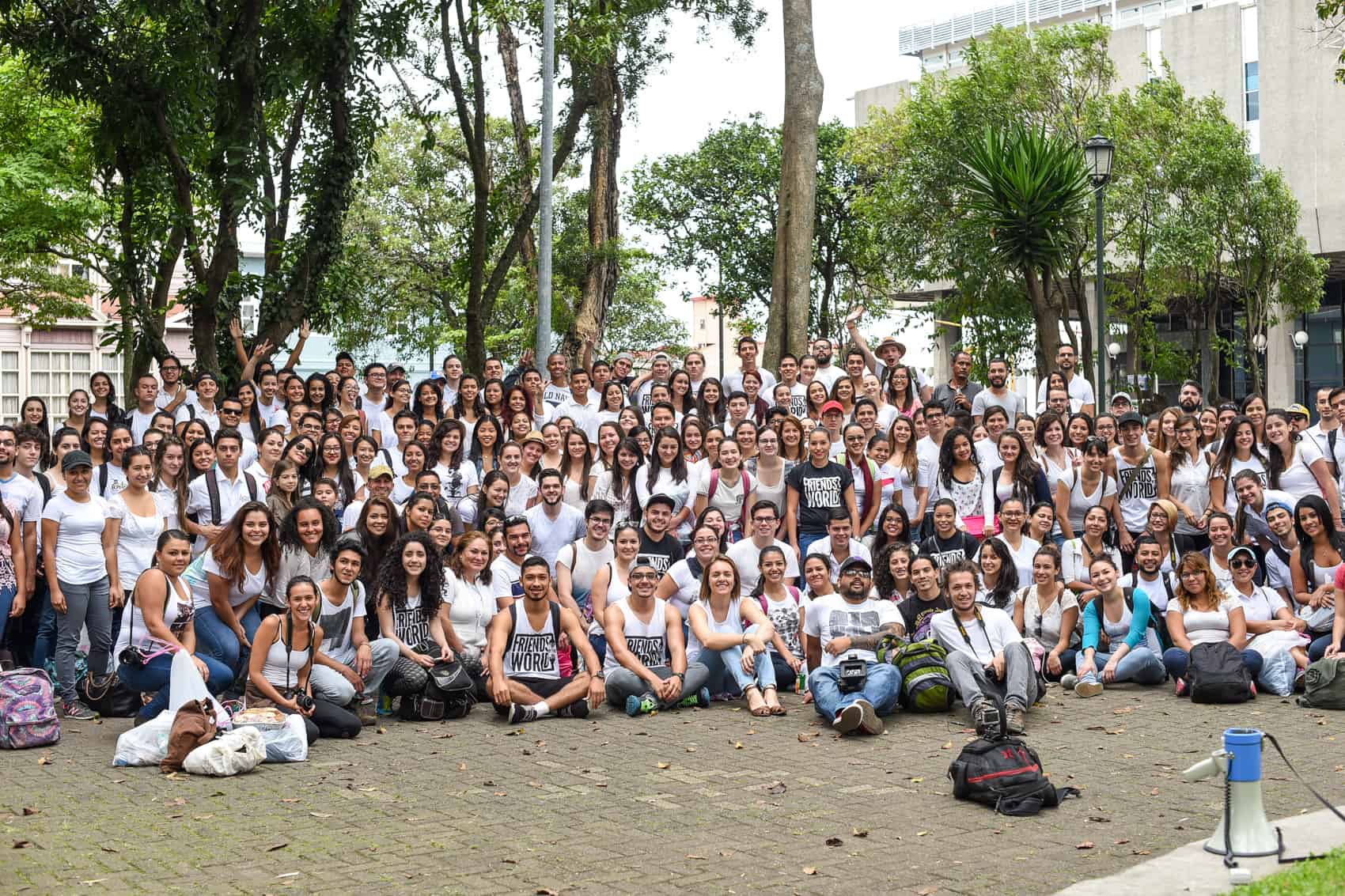 A country’s youth is its future, and youngsters from around the nation came together on Saturday to show that they have all the willingness to create a better Costa Rica.

The social work communities “Friends of the World” and “Vaso Lleno” joined forces for the second edition of “De la Mano con la Calle” (roughly translated as “Hand in Hand with the Homeless,” or “A Helping Hand for the Street”). More than 200 volunteers, all dressed in white, started in Parque España in eastern San José, then traveled 16 different routes around the city, offering food, clothes, haircuts, shaves and checkups to the homeless josefinos they encountered along the way.

Volunteers’ work actually started two days before, when they met to prepare sandwiches and collect cookies, cakes, chocolates and drinks, as well as to organize all the donated clothes they received to give away to homeless people. The only requirement to participate was a positive attitude and desire to help.

Ringleaders Oscar Camacho Murillo, only 19 years old, a representative of  Friends of the World, and Cristina Gomar Padilla, age 25, representative of Vaso Lleno, met other members of their groups and hundreds of additional volunteers at 9:00 a.m. on Saturday at Parque España. The park was full of bags of clothes and lots of food they would carry along their journeys. The volunteers included health care workers, barbers and photographers. 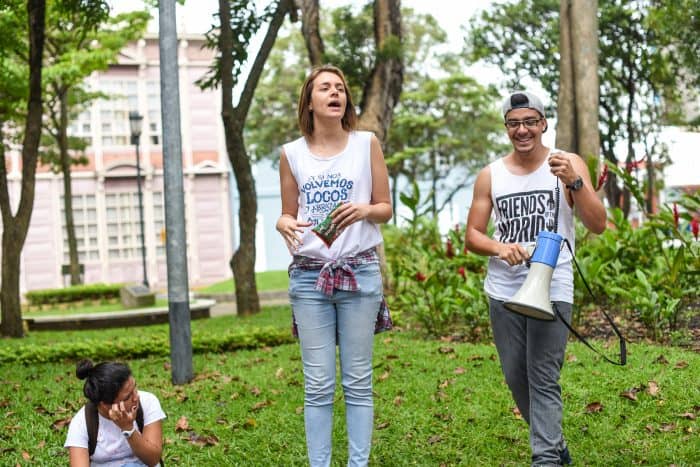 “The first edtion of De la Mano con la Calle took place August 8, with half as many participants as today. People really enjoyed it. It caused a real impact,” Camacho told The Tico Times. “We want to share with the homeless and spend time with them. We have been told many times that, even though they really need food and clothes, the time people spend with them is primordial because it is so unusual. These are people who might spend a week without talking to anybody, and there are very few people who hug them or ask how they are.”

Volunteers were divided into 16 groups with different routes in order to cover as much as possible of the city of San José. Routes covered ground including Central Avenue; the areas around the San Juan de Dios, Clínica Bíblica and Calderón Guardia hospitals; La California, the Museo de los Niños, and the infamous Zona Roja near the Coca Cola, among many other areas. 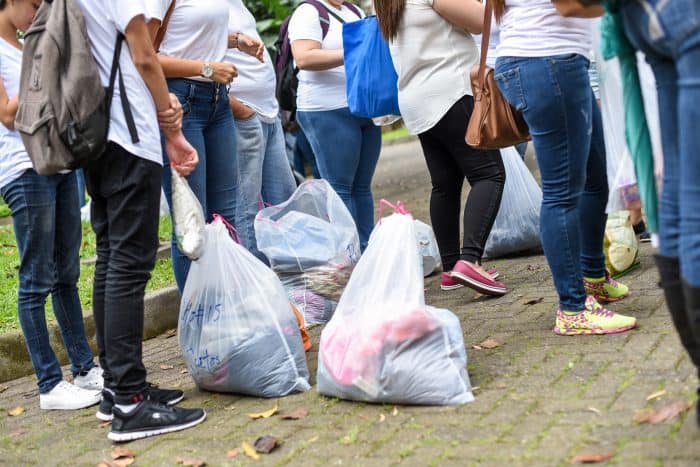 Bags of clothes for the homeless. Alberto Font/The Tico Times

“The message we want to transmit through this initiative is that there’s not a lot of time required to help,” explained Camacho. “We want to show that it is possible to spend just a few hours in the morning or in the afternoon helping others, and thus, make this viral, because when someone likes something, there will be more people willing to try it.”

Along the routes, groups had the opportunity to meet and share with approximately 500 homeless people, who received sandwiches and other food, drinks, candy, medical attention, haircuts, shaves, and the most important things: love, affection, time, and laughs. They also told the volunteers their life stories and experiences. Some showed off their ability to speak English or French, or discussed their university degrees. Others sang beautiful songs.

“I think it is a really nice idea. To share with people is the most beautiful part. People must understand the goal clearly, and not do this just to have other people see you doing it,” said Stephany Vargas, a first-time De la Mano volunteer. 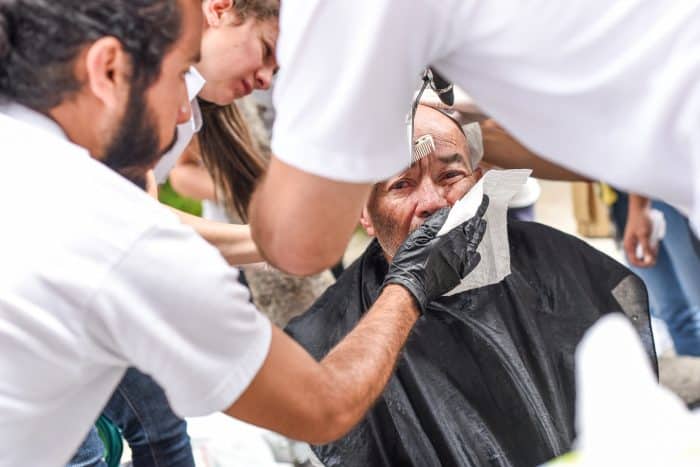 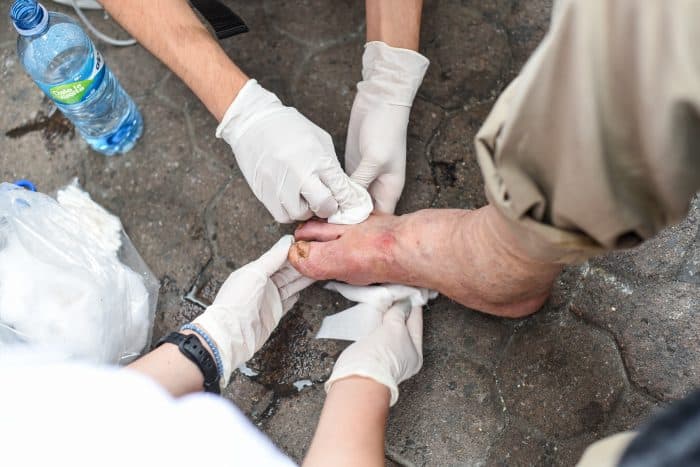 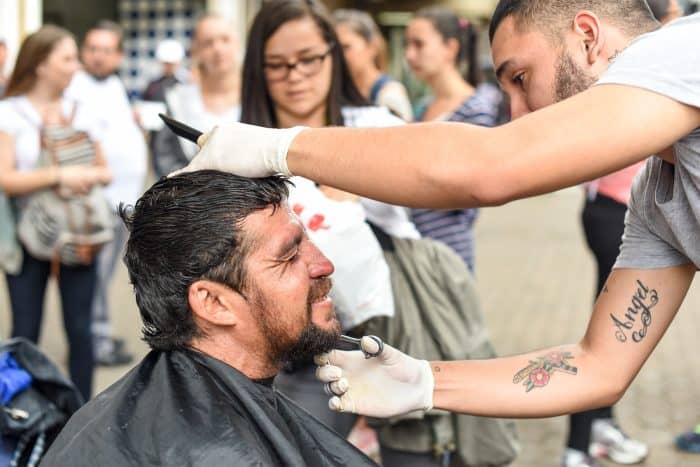 “It has been a nice experience, because most of them, despite their situation, are in a really good mood. They make you see yourself as a kind of selfish person,” said Juan José Sibaja, a volunteer from Heredia. “I mean, you have everything, yet you are always complaining, and these people have a really nice attitude.” 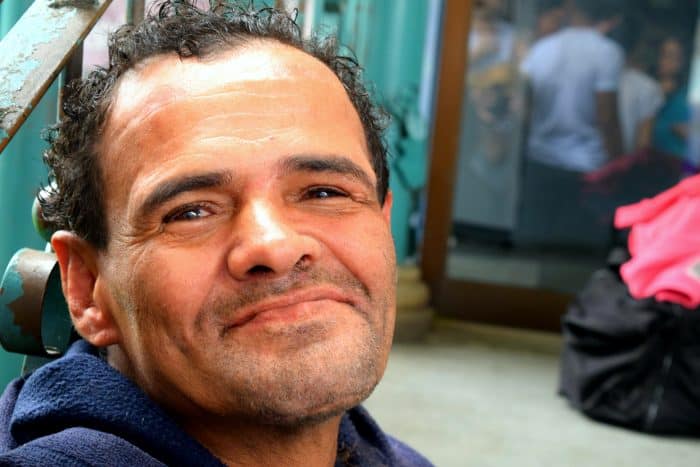 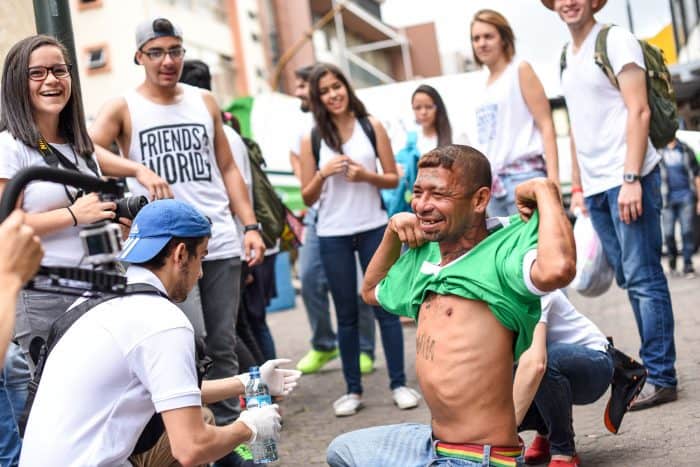 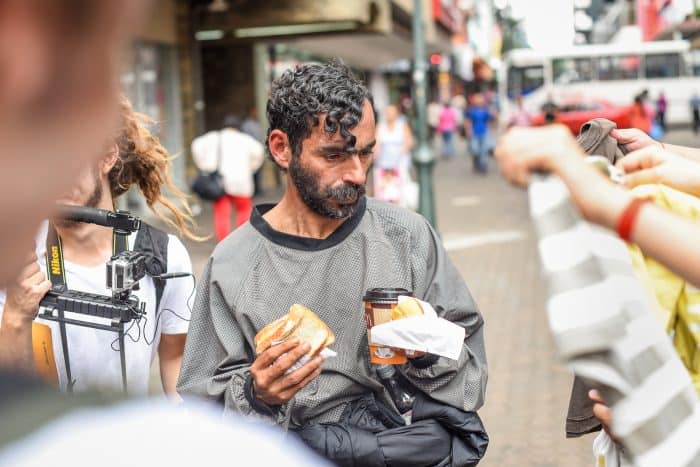 “It has been a pretty hard experience. We have seen quite rough situations, and we couldn’t hold back the tears with these people. the youngsters, even children! It changes completely your way of seeing the world,” volunteer Josué Gutiérrez explained. 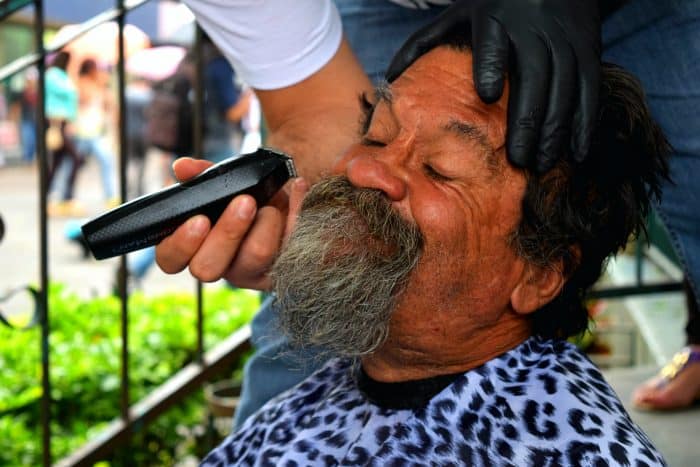 Oldemar "Chito" Leonel gets his first shave in about a year. Amanda Zuniga/The Tico Times 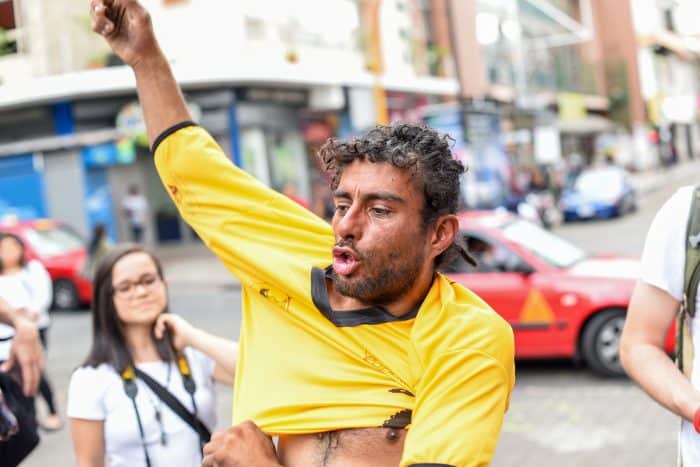 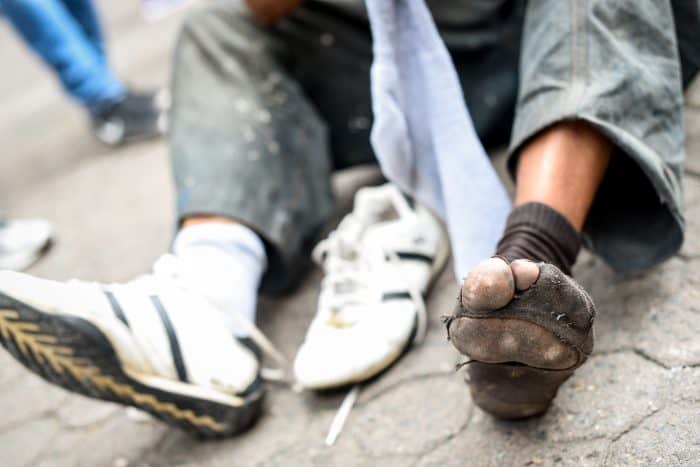 “This is my second time with De la Mano con la Calle. I have already participated in four activities for the homeless. I love it; these experiences fill my heart,” volunteer Jazmín Zamora said with evident pleasure. “We gladden their day only with a sandwich and some time, but it’s actually us who end up full of love. As I said, that truly fulfills me, and it’s nice to see that we left something behind with them.”

“Giving Back” is an occasional series that seeks to draw attention to the work of nonprofits, community organizations and other donation-based initiatives around the country. Nominations for the series can be sent to us at [email protected]. 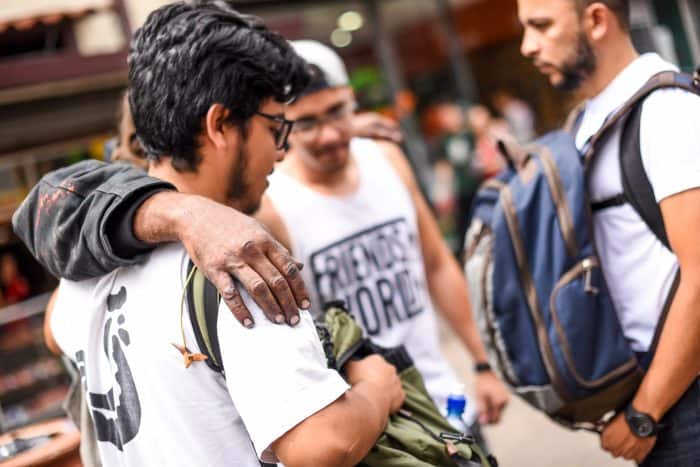 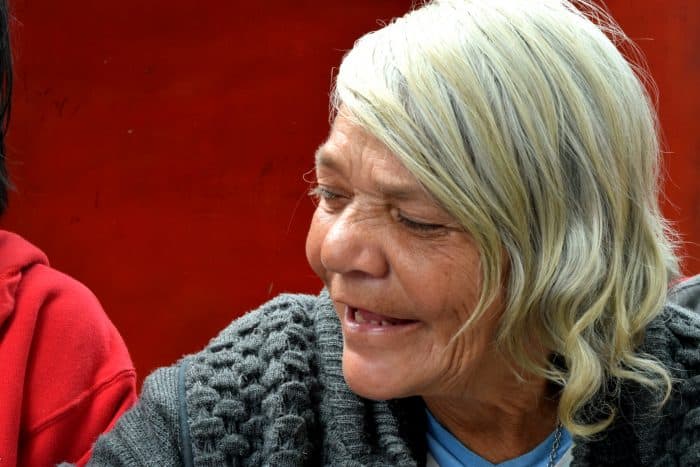 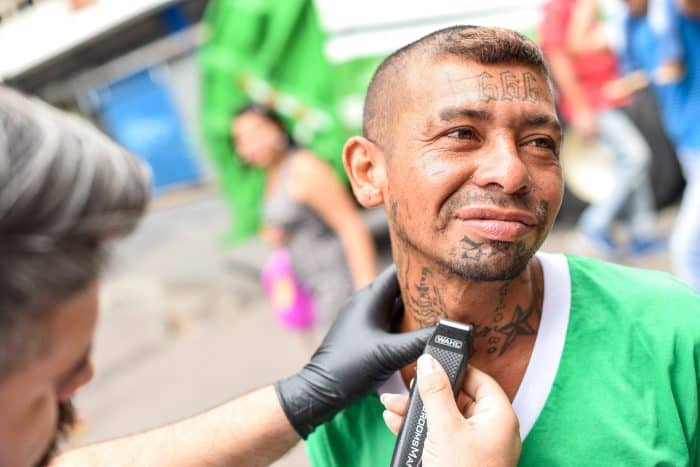 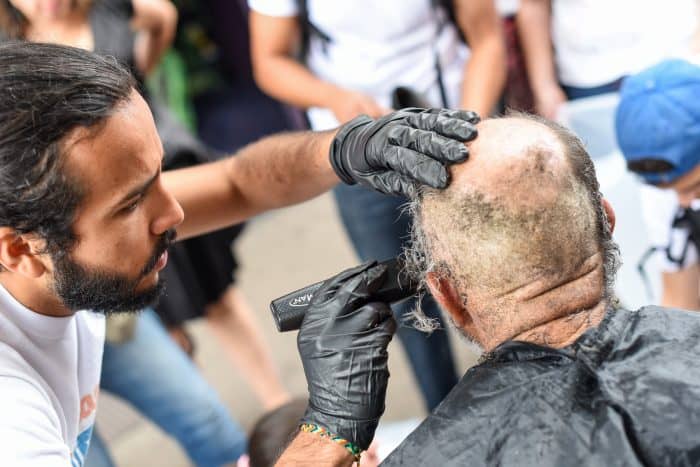 Costa Rica tallied more than $5.77 billion in exports over the first five months of 2021, a 23% increase over…