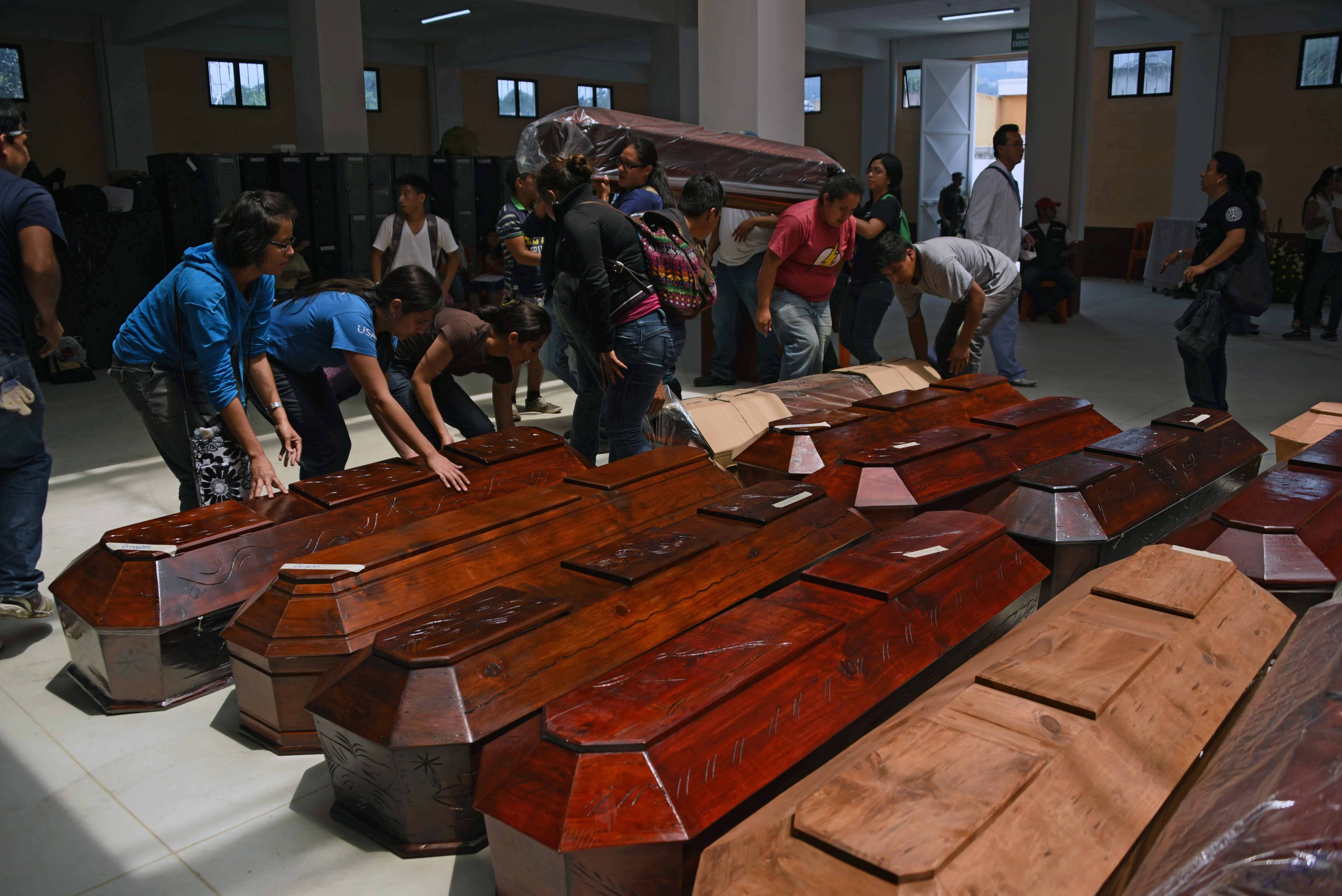 Coffins are donated for victims of Thursday's Guatemala landslide in the village of El Cambray II, in Santa Catarina Pinula, 15 km east of Guatemala City, on Oct. 3, 2015. (Johan Ordóñez/AFP)

SANTA CATARINA PINULA, Guatemala – At least 32 people are dead as rescuers resumed a desperate search Saturday for several hundred people believed missing after a landslide buried a village on the outskirts of Guatemala’s capital.

The death toll has steadily climbed over the 36 hours since heavy rains triggered the slide and was expected to rise further as search and rescue efforts continue. On Thursday night, waterlogged earth and debris tore through the village of El Cambray II, in the municipality of Santa Catarina Pinula, destroying or damaging 125 homes.

At dawn Saturday, rescue workers, police, soldiers and volunteers began a second day of clawing away at the debris with picks and shovels. Members of the Red Cross carry a small coffin with the remains of a victim pulled out of the debris in the village of El Cambray II, in Santa Catarina Pinula, 15 km east of Guatemala City, on Oct. 3, 2015. Johan Ordóñez/AFP

Two firefighters were injured later in the day, when a wall collapsed as they were trying to extract a body from the rubble.

Nearby, relatives of the missing checked in at a makeshift morgue set up next to the buried homes.

Around them were scenes of desolation: twisted mattresses and broken furniture, a lost dog sniffing about, vultures overhead.

“We can’t live here anymore,” Carlos Hernández, an electrician who survived the Guatemala landslide lamented as he stepped between rescuers with his few remaining belongings on his shoulder. A police officer takes part in the search for victims in the village of El Cambray II, in Santa Catarina Pinula, some 15 km east of Guatemala City, on Oct. 3, 2015. Johan Ordóñez/AFP

The destruction had been sudden and decisive.

“I went on an errand for my mother and when I returned there was nothing,” Carlos Ac, 17, told AFP. He was still waiting for word about his missing mother and seven siblings.

In gray denim trousers and a black coat — now the only clothes he has — Ac said his family had come from the city of Quetzaltenango, approximately 200 kilometers (125 miles) to the west of the capital, to sell tortillas.

Alex López, 44, called his ex-wife and daughters as soon as he heard of the landslide. “It rang but there was no answer,” he told AFP. On Saturday, he was waiting for the body of his ex-wife and had already been given those of his two daughters, aged 21 and 22, and his two-year-old grandson. Family members of victims weep outside a provisional morgue in the village of El Cambray II, in Santa Catarina Pinula. Johan Ordóñez/AFP

Thirty-four people have been pulled out alive from the mud and rubble, while 25 others were injured, CONRAD officials said.

Families have reported receiving text messages from people they believed to still be trapped.

Among the 32 dead are at least three children.

The impact of the heavy rain was exacerbated by a nearby river, officials said.

Municipal authorities had urged the community, about 15 kilometers (10 miles) east of the capital Guatemala City, to relocate several times, most recently in November of last year.