Myth: Refugees are a burden 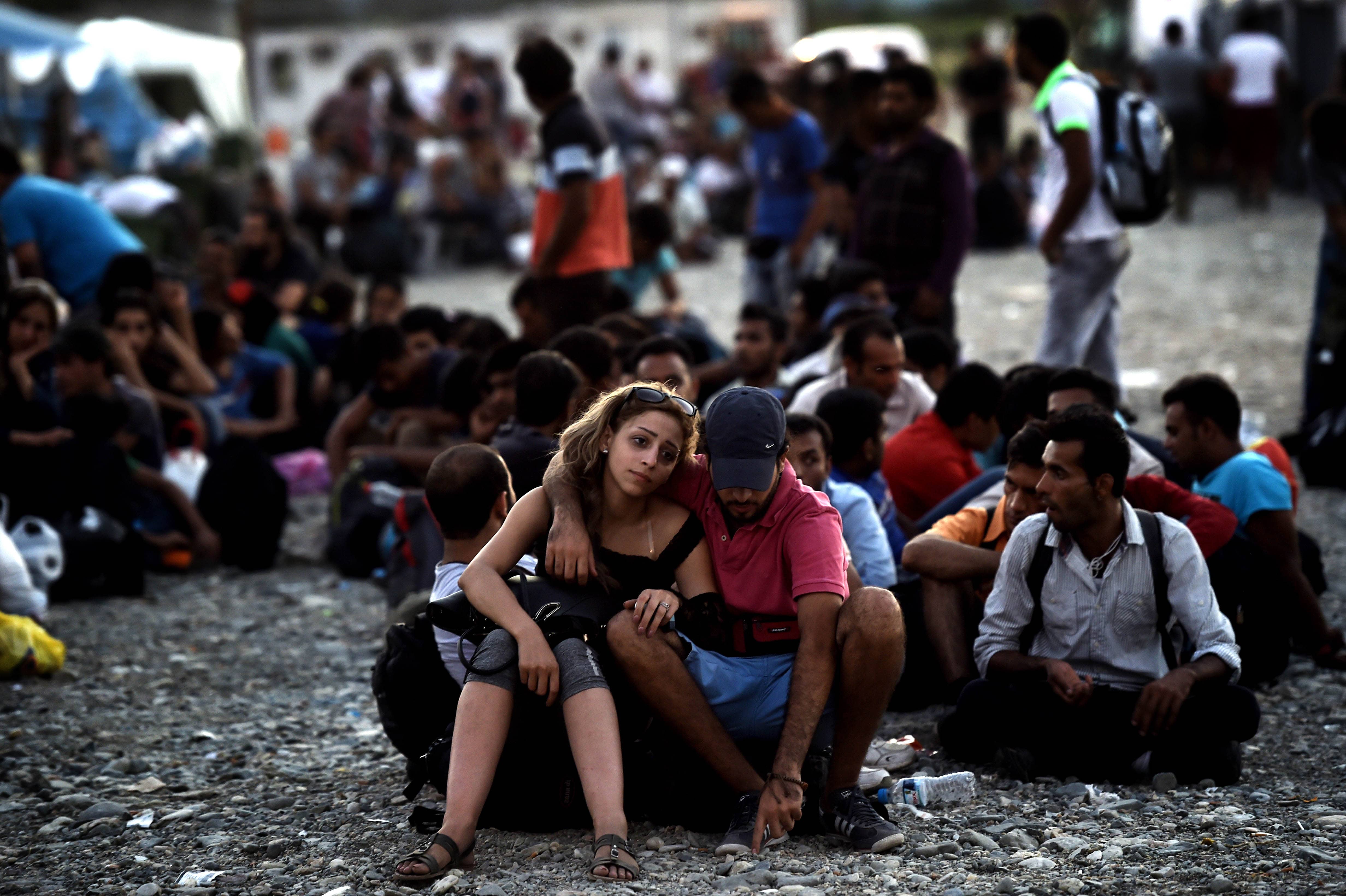 Syrian refugees wait with other migrants for the train near a station at the F.Y.R. in Gevgelija, Macedonia, on Aug. 29, 2015. The EU is grappling with an unprecedented influx of refugees fleeing war, repression and poverty in what the bloc has described as its worst refugee crisis in 50 years. (Aris Messinis/AFP)

Europe is now struggling with the most severe crisis of refugees in decades, as millions of people flee violence in Syria and Iraq. Even as German Vice Chancellor Sigmar Gabriel outlined a proposal this week to place 160,000 refugees in nearly two dozen countries, he acknowledged that the plan was merely “a drop in the ocean.” Germany alone expects to receive 800,000 applications from asylum seekers this year. The U.S. government announced Thursday it would take in 10,000.

Refugees are often described as a “burden” for the countries they settle in. The usual thinking is that they are a drain on limited government coffers and a weight on sluggish economies, but that countries ought to take them in for moral and legal reasons. Even those in favor of expanding help for refugees, like the former British foreign secretary David Miliband and the executive director of Human Rights Watch for the Middle East and North Africa, have referred to sharing the “burden” of refugees.

However, research that has looked at the effect of refugees around the world suggests that, in the longer run, this view is often wrong. From Denmark to Uganda to Cleveland, studies have found that welcoming refugees has a positive or at least a neutral effect on a host community’s economy and wages.

Countries do incur big costs up front to help refugees. Governments need to spend money to process claims for asylum, temporarily house and feed refugees, and help them find permanent homes, jobs and skills training. For Europe’s financially strapped governments, settling refugees will be a challenge. The United Nations agencies responsible for helping millions of refugees are essentially broke.

But beyond the upfront costs of processing and settling refugees, the perceived burden of refugees on a host economy may not be as significant as it seems. “There’s not any credible research that I know of that in the medium and long term that refugees are anything but a hugely profitable investment,” says Michael Clemens, a senior fellow who leads the Migration and Development Initiative at the Center for Global Development, a Washington think tank.

Clemens cites a study by Kalena Cortes, a Texas A&M professor who followed refugee and non-refugee immigrants who arrived in the U.S. in the late 1970s. Cortes found that it took the refugees a few years to get on their feet. But soon the refugees were out-earning non-refugee immigrants, and adding more value to the economy each year than the entire original cost of receiving and resettling them.

The most common worry from locals is that refugees will take over jobs, especially unskilled ones. Refugees often lack the language skills necessary to do higher-paid work, and so a big influx of refugees into a job market can cause wages at the lower-end of the spectrum to fall.

But, in the longer run, refugees appear to play an outsized role in creating new jobs, and even raising the wages of natives. One reason is that refugees appear more likely than other groups to open small businesses.

Clemens says this is because, compared with other kinds of immigrants, refugees are less likely to have a job waiting for them in their host country. Other migrants may move countries to take a specific job offer with a company, or to join their family, who may offer them a job.

A long list of innovative and important Americans were refugees, including former Secretary of State Madeleine Albright, Jerry Yang of Yahoo, and Sergey Brin of Google. Andrew Grove, who fled Hungary at the age of 20, helped build the modern semiconductor industry at Intel, without which your iPhone wouldn’t exist.

But even if refugees become nannies, cooks or vegetable pickers, rather than the next Google executive, they can still benefit the economy, says Clemens. “There is a myth in the U.S. that desirable immigrants are the ones with PhDs, and people with high school degrees aren’t desirable. And there’s no economic substance behind that myth,” he says.

Peri and Foged’s impressive study examines the wages of every person in Denmark for a period of 12 years that included an influx of refugees, many initially from Bosnia. The Danish government randomly distributed the refugees in some counties around the country, creating a nice data set for the economists to examine.

The researchers found that the Danish people who lived in communities where refugees arrived saw their wages grow more quickly than those without refugees. The study confirmed an effect that Peri had already observed among communities that received immigrants in the U.S. and in Germany. Not every single Dane was helped by the change, Peri says, but on average more people upgraded their jobs and earned higher wages.

Peri says the reason is that an influx of workers with different skills encourages people to specialize in jobs that they are uniquely suited for, which helps businesses and the economy to grow. As refugees come in, they typically fill jobs that require few language skills. Natives, in contrast, move to jobs that require more native skills, like managing these new workers, or talking to customers and suppliers. This specialization of workers makes companies more productive, which allows businesses to expand.

“For economies, immigrants bring a push to specialization, and specialization increases productivity, and increases the size of the firm and the amount of jobs that you can create,” Peri says. Essentially, Peri’s work shows that an economy is not a zero-sum game.

There are other reasons refugees can benefit the local economy: For one, people tend to discount the impact of refugees as consumers for local businesses. Their arrival boosts demand for food, shelter, infrastructure and many other services, benefiting farmers, construction companies, landlords and more.

Peri suggests that the current influx of refugees may help Europe’s economy for two reasons. First, Europe is more in need of high-skilled jobs, for those with some advanced education, than low-skilled ones, he says. As in the studies above, an influx of refugees could help create more higher-skilled jobs for natives.

Second, the populations of many European countries are aging rapidly. Germany’s population, for example, is expected to shrink from 81 million inhabitants currently to around 68 to 73 million in 2060. Since most refugees are younger, they may provide a boost to the working age population that will help Europe’s economies grow for years to come.

All in the details

But refugees aren’t always an economic benefit to countries. The way that refugees affect their host economy depends a lot on how a country deals with them.

It might seem counterintuitive, but the countries that take the longest to process refugees and have the tightest restrictions on them end up paying the most per refugee, says Erik Jones, a professor at the Johns Hopkins University School of Advanced International Studies who has researched migrants.

For example, the U.K. has long had a policy of barring refugees from working while their cases are processed, which sometimes takes years. Jones cites migrants who came to the UK from Yugoslavia, who would lose their benefits if they started working.

Other countries have policies of mandatory detention for migrants; Australia had a practice of detaining those who arrive by sea until their claims are processed, a policy that, by some estimates, cost the country over a billion dollars a year, or about $119,000 per asylum speaker. In these cases, refugees are forced to live off of government benefits for a year or more, a policy that does take a hefty toll on taxpayers.

A study released by the University of Oxford Refugee Studies Center last year called these current approaches inefficient and unsustainable, and the U.N. has said that the threat of detention is not enough to discourage an asylum seeker fleeing violence and war. Instead, these groups urge countries to allow refugees to become self-reliant, giving them the ability to work, have some freedom of movement, and pursue economic opportunities.

Countries usually prevent refugees from working for a few reasons, experts say. First, advocates don’t want those seeking political asylum to be confused with people who are migrating for economic reasons, since countries tend to have higher barriers to the latter. Second, governments may fear the political consequences if refugees integrate quickly and take jobs from locals.

Unfortunately, this short-term thinking can lead to larger longer-term problems for a local economy. Beyond wasting the talents, skills and goals of migrants, forcing refugees to live off the government racks up a hefty tab for taxpayers. In the process, critics suggest, many countries are creating their own refugee crises.

Swanson is a reporter for Wonkblog specializing in business, economics, data visualization and China.