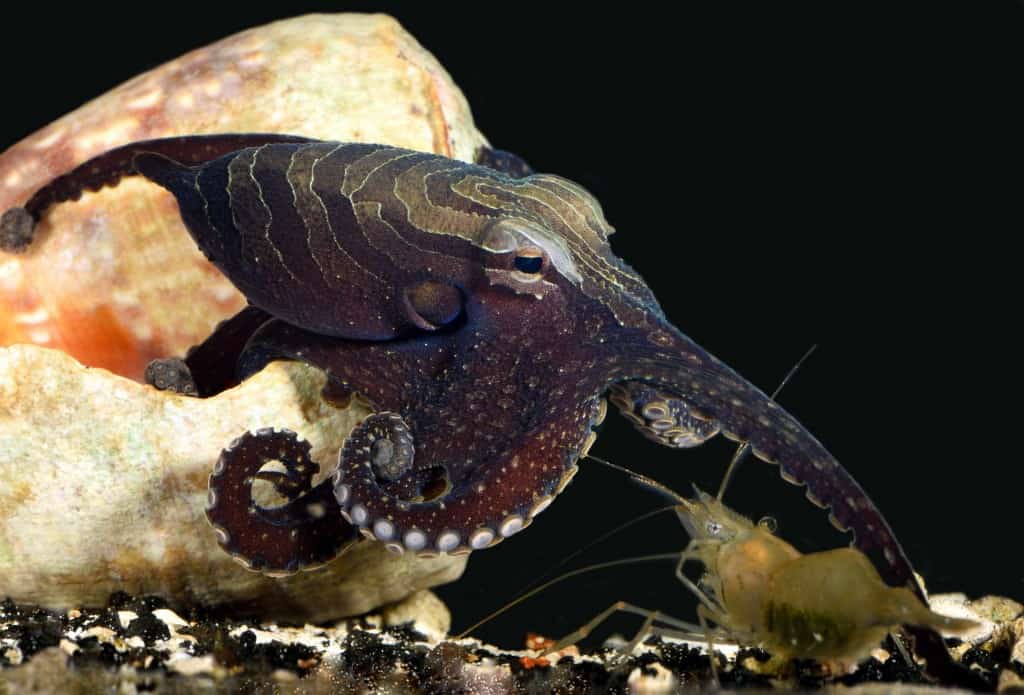 Octopuses are freaky and mysterious, and they’re notoriously difficult to study. But research on one particularly freaky species shows us just how much we have left to learn about cephalopods: The larger Pacific striped octopus displays mating and hunting behavior unlike any other, suggesting that the routines we think of as being “normal” for an octopus might just be the only ones we’ve observed.

The octopus, which was first observed decades ago by Arcadio Rodaniche, has only recently become accessible for close study. In fact, it’s never been officially described as a new species, and has no scientific name. But scientists have been intrigued by — and skeptical of — the strange behaviors Rodaniche claimed to see in the wild.

Several years ago, Richard Ross of the California Academy of Sciences came across some larger Pacific striped octopuses on the aquarium trade circuit. He’s been studying them ever since, and his findings were published Wednesday in the journal PLOS ONE.

Ross has revealed some of the species’ weird behaviors before. Last year, National Geographic reported on the octopus’ strange mating ritual. Most female octopuses are quite aggressive towards males, and most observed mating has involved males performing the task of inserting sperm into the female as quickly (and with as little contact) as possible.

The larger pacific striped octopus does something quite different: The males and females stay intertwined, beak-to-beak, as if kissing. Researchers observed pairs staying together for days, engaging in what looked to be very risky sex for the male — but they didn’t see the females get aggressive.

“Octopuses have a reputation for being sexual cannibals,” study author Christine Huffard of the Monterey Bay Aquarium Research Institute explained. It’s generally thought that females will strangle males if given the opportunity, and then eat them.

But that sexual cannibalism — like most octopus behavior — hasn’t actually been observed more than a few times. Octopuses are solitary, hard to find creatures, and it’s difficult to observe them in the wild.

“With this species, we’d see a male presenting himself to the female and going right up to her mouth,” Huffard said. “She’d often envelop him completely in her arms, which is what happens in the cannibalism we see. There’s this high level of what appears to be aggression, but it doesn’t lead to injury.”

The fact that this rough intimacy can be part of non-lethal intercourse shows just how little we know about octopuses.

Once the mating took place, researchers noticed something else: Instead of dropping a single brood of eggs in their lifetimes — which is thought to be common practice for octopuses — the females would continue to mate and lay eggs even as they produced hatchlings.

The new study also describes the unusual feeding behavior of the species.

Most octopuses are thought to tackle all of their prey the same way, using all eight arms to capture it. Some poke or prod inside tiny spaces with their tentacles, waiting for prey to swim out. The larger Pacific striped octopus does this for most prey, but it has a special — and rather ingenious — trick for snaring shrimp.

The octopus creeps forward and reaches out, tapping the shrimp (on the shoulder, so to speak) with a single tentacle. The shrimp will swim backwards — its standard move to escape danger — and end up right where the hungry octopus wants it.

“It has this very specific way of approaching a very specific kind of prey,” Huffard said. “It seems to know the difference and treat shrimp accordingly.”

For now, this newly rediscovered species seems radically unique. But only a handful of the 300 or so known species of octopus have even been observed, so that could change.

“Very few behavioral studies have been done,” Huffard said. “But where the logistics allow them, studies are showing us that octopus behaviors are far more complex than assumed.”