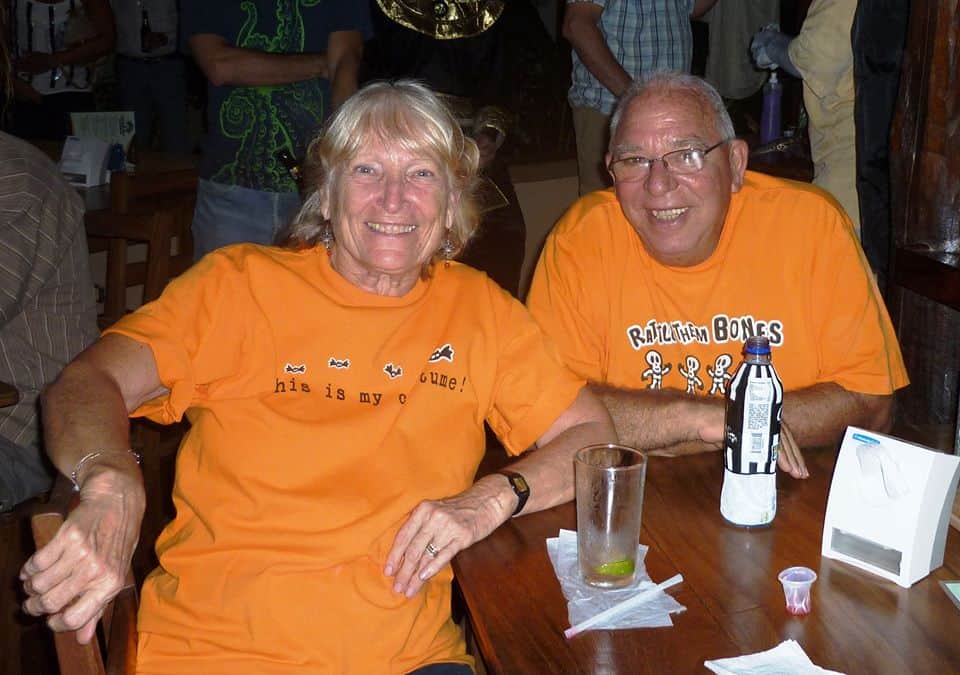 Suzye and Barry Lawson during a Halloween Party in Tamarindo. Barry died on April 7, 2015, a week after he and Suzye were attacked at their Playa Langosta hotel. ((Facebook))

The faltering police presence in Tamarindo has for years caused frustration among local residents and conflict between the popular beach town and the capital of the canton that it’s part of, Santa Cruz.

But the recent robbery and killing of beloved Tamarindo resident and hotel owner Barry Lawson has residents outraged, and considering serious steps to remedy the situation, including a lawsuit.

Last Friday over 300 people from the community met at the Playa Langosta Surf Club Sports Bar to discuss security in the wake of Lawson’s death.

Lawson and his wife, Suzye, who owned the Villa Alegre Bed and Breakfast and ran a local non-profit, Amigos de la Educación, were robbed at their hotel on April 1. Barry Lawson sustained serious head injuries and died April 7 at a hospital in San José.

Friday’s gathering was hosted by the Tamarindo Integral Development Association (ADI), a community organization that focuses on resolving community problems, including public safety. On the agenda: Santa Cruz’s disappointing response to Tamarindo community needs; the inconsistent police presence in town; a proposal for a video monitoring system; and discussion of a potential lawsuit in hopes of forcing Santa Cruz to attend to increasing security concerns in the area.

Santa Cruz Mayor Dr. Jorge Chavarría and Santa Cruz Police Chief Elder Monge Castro were also scheduled to speak at the meeting, but Monge pulled out at the last minute. The police chief said the location wasn’t secure, and he objected to the sale of alcohol at the meeting, saying it would affect the discussions. Some in the crowd were livid.

ADI Treasurer Trevor Bernard expressed disappointment: “We had hoped to write down our needs and to get the police to sign it and then to hold them to it,” he said. Jogi Juergen Gerner, who heads the ADI security committee, told the crowd about the committee’s work over the last 10 years, including many attempts to reach out to the Ministry of Public Security for help with maintaining a local police presence.

In 2007, the police had to vacate the donated building they had been using as a Tamarindo police station. The community then raised funds to help pay rent on a new headquarters, at Cabinas Maleko.

But once again, just recently, the police had to leave their station at Cabinas Maleko because the rent was $30,000 in arrears. The Ministry of Public Security had taken over paying rent for awhile. Then Tamarindo residents stepped in again, then the Municipality of Santa Cruz paid rent, until it didn’t.

Tamarindo’s pleas for financial assistance for the police, including rent, more manpower, vehicles and assistance with a proposed video monitoring system, have gone virtually unanswered.

Last week, Wolfgang Gollas, owner of the Tamarindo Diria Hotel, donated 5,000 square meters for a new police station. In the meantime, he’s agreed to foot the rental bill for the police to have a Tamarindo base at Cabinas Colibrí.

At the meeting, ADI urged people to report crimes to the association via its website to establish a record of local needs. The association also wants to raise money to pay for a video monitoring system to watch the town’s streets.

Then it was Santa Cruz Mayor Chavarría’s turn to speak.

“I feel very sorry for what just happened in Tamarindo, and I am here out of solidarity,” Chavarría told the audience.

“I believe Tamarindo should have police and the muni has paid several years rent for the police. So where is the Ministry of (Public) Security? When we stopped paying, we expected the Ministry of Security to pay.”

Some audience members got heated.

“The municipality hasn’t done anything,” Rik Grencik, who has lived in the area for 28 years, said.

“I came here to honor Barry. What happened to him has to be a catalyst for change,” he said. “I will give $500 for the arrest and conviction of the bastards who killed him.”

Mayor Chavarría promised to meet with his municipal cabinet about security in Tamarindo and to meet with the Ministry of Public Security.

Many audience members were enthusiastic about ADI’s idea of suing the government on behalf of Tamarindo to force it to attend to the town’s security needs. Tamarindo business owners and residents have long complained that, thanks to tourism, they pay heavily into local and national tax coffers, but receive little in return.

“We plan on going to the highest system of courts in this country,” Juergen from ADI said. “There are six attorneys in town helping draft the lawsuit and they are investigating similar cases around the country to see how we should do it.”

The lawsuit plan gathered pages of approving signatures from attendees.

Even Mayor Chavarría agreed that the local government, at least, owes Tamarindo.

“Tamarindo gives lots of money to the muni; what can the muni do for Tamarindo?” he said, summing up the community’s feelings.