Fears of food shortages in Vanuatu as huge damage revealed 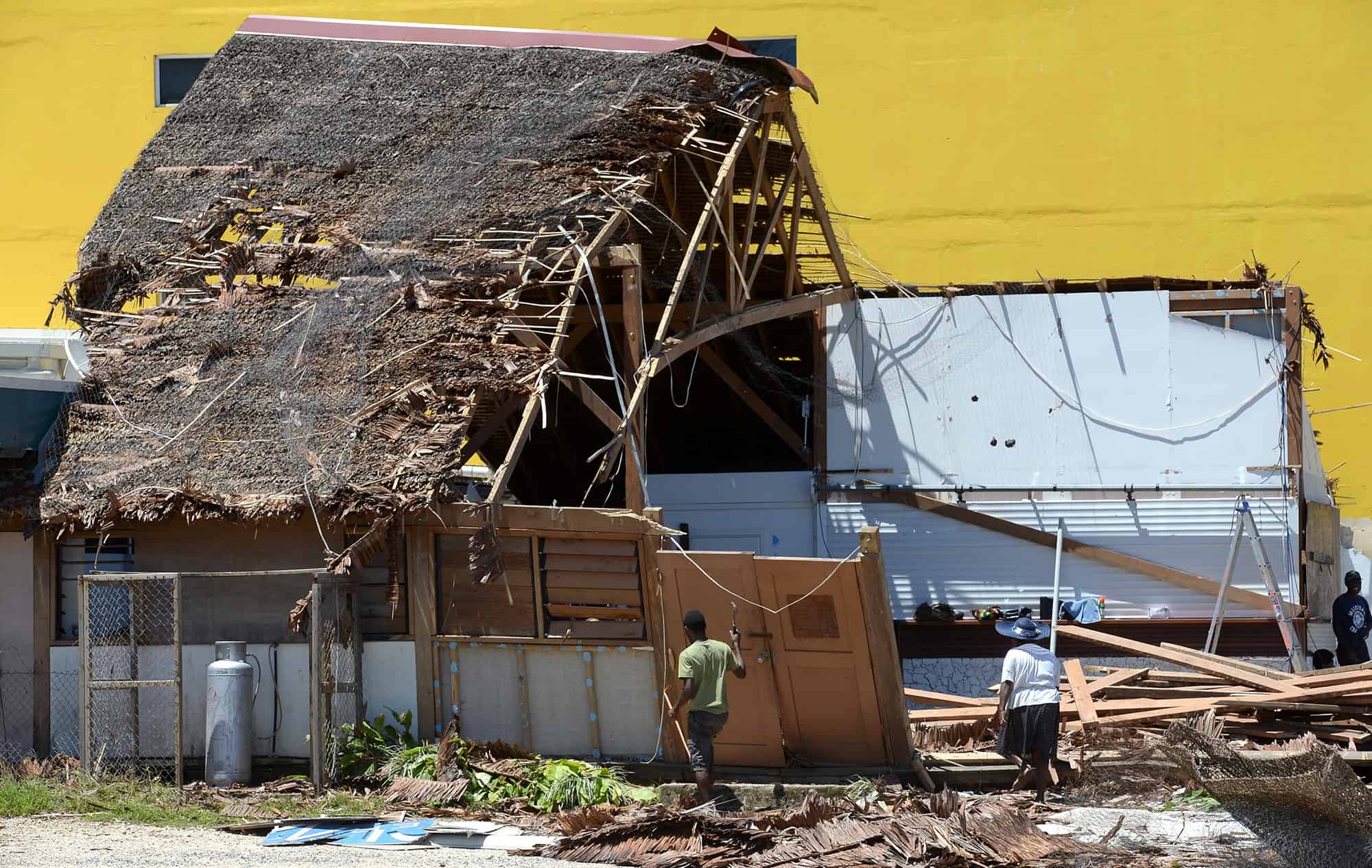 Residents clean up their homes in Vanuatu's capital Port Vila on March 17, 2015 after Cyclone Pam ripped through the island nation. (Jeremy Piper | AFP)

PORT VILA, Vanuatu — Vanuatu warned Tuesday it faces imminent food shortages as accounts emerged of huge damage to a large outer island, days after one of the fiercest cyclones on record pummelled the sprawling Pacific nation.

Relief agencies have warned that conditions are among the most challenging they have faced, with mounting concerns about disease, and the nation’s President Baldwin Lonsdale has appealed for the world to help.

With 24 people so far confirmed dead, the scale of the disaster became clearer with the first team of aid workers reaching Tanna Island, some 200 kilometres (125 miles) south of the capital Port Vila, itself badly damaged.

“The impression they got from their initial observations was that the damage is significantly worse than Port Vila,” Tom Perry from CARE Australia told AFP. He added that the hospital was functioning, but it had no roof.

“And particularly Tanna Island, where it appears that more than 80 percent of houses and buildings have been partially or completely destroyed,” she said.

“Not only buildings flattened, but palm plantations, trees. It’s quite a devastating sight.”

Communications to many of the other 80 islands in the sprawling archipelago were still down and Benjamin Shing, from Lonsdale’s office, said survivors would quickly run out of food.

“The first week we are relying on the fact that the food crops and the gardens are still edible and they can be used for the first week, but after the first week we’ll need to get some rations on the ground,” he told the Australian Broadcasting Corporation.

With crops wiped out, Shing feared the worst for a country that largely relies on subsistence farming.

“There will be extensive injuries if the people didn’t go to higher ground and there might be a lot of fatalities,” he said.

Perry said of the 24 people confirmed dead, at least five were from Tanna and that CARE Australia was also worried about the lack of food.

“Food running out is of great concern,” he said.

The U.N. Office for the Coordination of Humanitarian Affairs (OCHA) said in a situation report that “there are 24 confirmed fatalities” so far. Lonsdale on Monday said there were also some 30 injured.

In the capital Port Vila, access to water and electricity was partially restored after the storm brought down an estimated 80 percent of power lines and damaged most homes.

Stores also began reopening, but entire neighbourhoods remained without power as aid workers streamed in to help make sense of what many have said was one of the region’s worst weather disasters.

In the capital, leaves and branches lined the streets while residents began clearing metal roof sheeting from the roads around their homes and using machetes to hack through fallen trees.

Personal belongings, household items, mattresses and clothes were spread out on the ground and hung on washing lines as people dried them out, with the cyclone slowly weakening.

Samuel Toara, 25, thought he was going to die when the storm barrelled ashore, sheltering in the pitch black with two other young men as the tempest roared past his home.

“It was very hard. The cyclone sounded like a big plane flying very low,” he told AFP.

As heavy rain pounded his house, made of corrugated metal and timber, part of the roof blew off.

“The rain and wind was like white smoke and it flooded up to my knee. But I told the boys don’t worry about the water,” he said. “As long as we survive.”

The United Nations said there were at least 3,300 people sheltering in 37 evacuation centres around the country, including Melissa Song, 22.

She was sharing a small guest room at a Port Vila resort turned into a makeshift evacuation centre with nine other family members, including three young children and a baby.

UNICEF has estimated that 60,000 children have been affected by the cyclone and virtually all schools were closed, with the organization attempting to restore some normality to their lives.

“We’re working to set up temporary learning spaces so kids can start learning and playing again as soon as possible,” said the organization’s emergency specialist Mioh Nemoto, who also expressed concern about they would be fed.

“Food security is likely to be a continual problem and we need to start thinking now about how children will stay well fed.”

As aid flights continued landing, workers on the ground said there was no way to distribute supplies across the archipelago’s islands, warning it would take days to reach remote villages flattened by the storm.