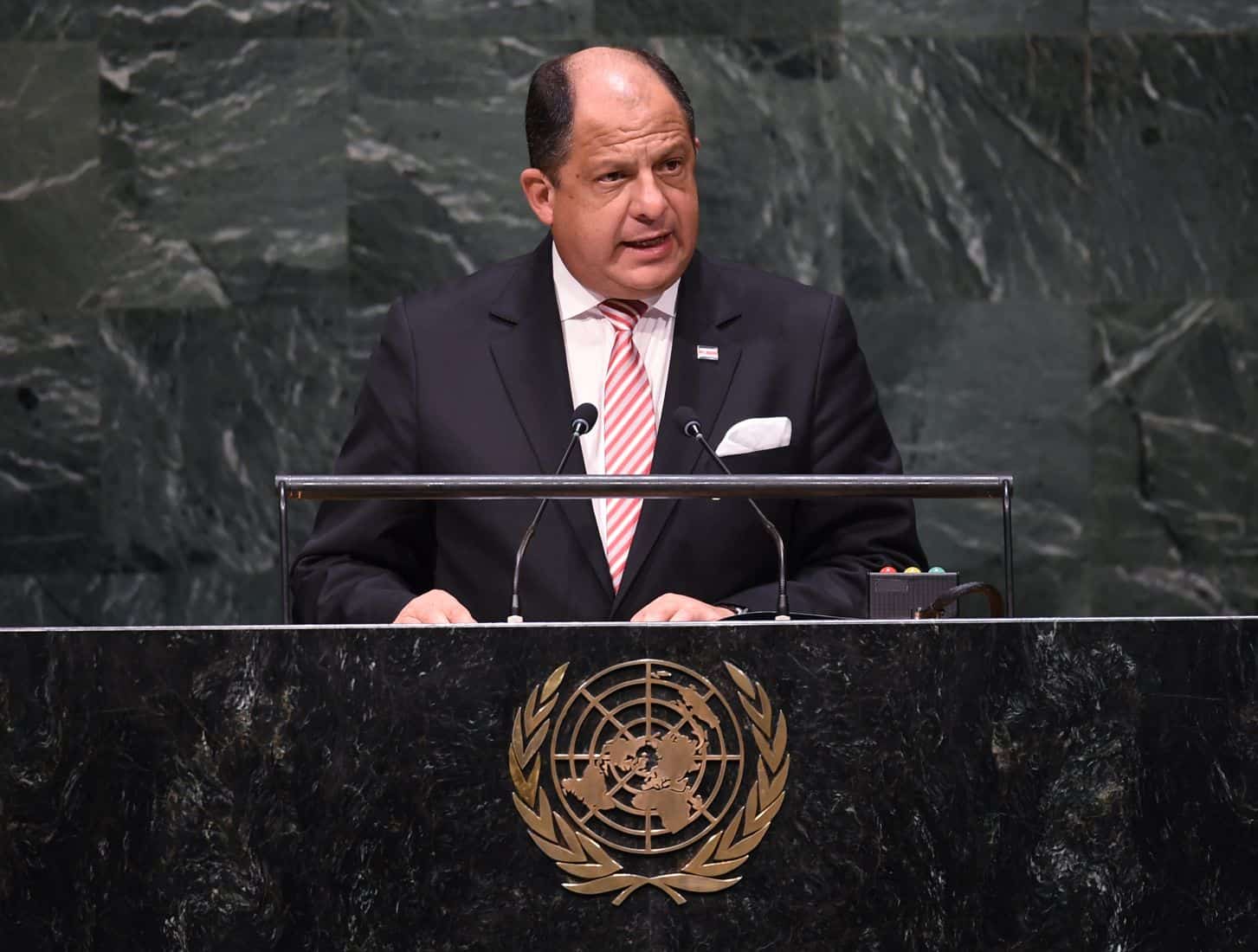 Respect for human rights, peaceful resolution to international conflicts and disarmament played prominently in Solís’ speech at the meeting in New York on Wednesday.

With the theme “Silence is not an option for us,” Solís called for a more proactive Security Council and criticized the use of vetoes by permanent members of the council to obstruct conflict resolution. Solís criticized the argument of national sovereignty as a shield against U.N. action against genocide, crimes against humanity, war crimes and massive human rights abuses.

“Some permanent members of the Security Council have made it impossible to intervene when it should have acted to keep the rivers from flowing with blood, the blood of innocents,” he said.

Building on the theme of violence, the president came out against the perceived hypocrisy of the war on drugs while arms flowed freely into conflict zones around the globe.

“Trading with death is to be complicit in its atrocities. In this respect, it would be just to ask ourselves, what is the ethical difference between trading guns that kill young people in developing countries and trading drugs that equally affect the richest countries,” he asked.

After naming the threat from the Islamic State in Syria and Iraq, conflicts in Somalia, the Central African Republic, Afghanistan, Ukraine, Gaza, Sudan and Southern Sudan, it felt like the only international flareup Solís did not mention was the one involving his own country.

Solís did not mention Nicaragua in his U.N. address, but the border dispute was hinted at in his rhetoric.

“Are all the members of this organization abstaining from the use of threats or force against the territorial integrity or independence of another state? In some cases yes, in others no,” Solís said.

The president emphasized Costa Rica’s belief in international mediation, rule of law and the International Court of Justice, where Costa Rica and Nicaragua have been embroiled in border disputes since 2012.

Costa Rica and Nicaragua currently are arguing three legal disputes at The Hague-based world court. One involves the invasion by members of the Nicaraguan military of Isla Calero, a small, protected wetland that both countries claim as their own. Nicaragua filed a counterclaim against Costa Rica for the construction of a border road, known an Route 1856, that runs parallel to the San Juan River. Costa Rica then filed another claim over maritime limits. That case was prompted by Nicaragua’s efforts to grant oil-drilling concessions in a disputed area.

Foreign Minister Manuel González lamented the deterioration of Costa Rican-Nicaraguan relations in a hearing at the Legislative Assembly on Sept. 4, and expressed concern about Nicaragua’s negotiations to buy naval equipment from Russia. In August, reports surfaced that Nicaragua intended to add 13 dredging vessels in the San Juan River next year, in apparent violation of the world court’s precautionary measures.

“Our only weapon has only and will ever be international law,” he said.

The president said that meeting Millennium Development Goals set by the U.N. had so far been insufficient. Solís said that the post-2015 Millennium Development Goals under consideration must have specific objectives, clear targets and indicators to measure, as well as broad international consensus. Solís reiterated his call for a binding, legal agreement to address climate change and called out the world’s largest emitter of greenhouse gases for their disproportionate impact on smaller, less developed nations.

The president stressed that there would be no peace as long as there was war, unjust inequality, and disrespect for human rights, biodiversity and sustainable development.