Dispatch from the border: Migrants have shelter but little else 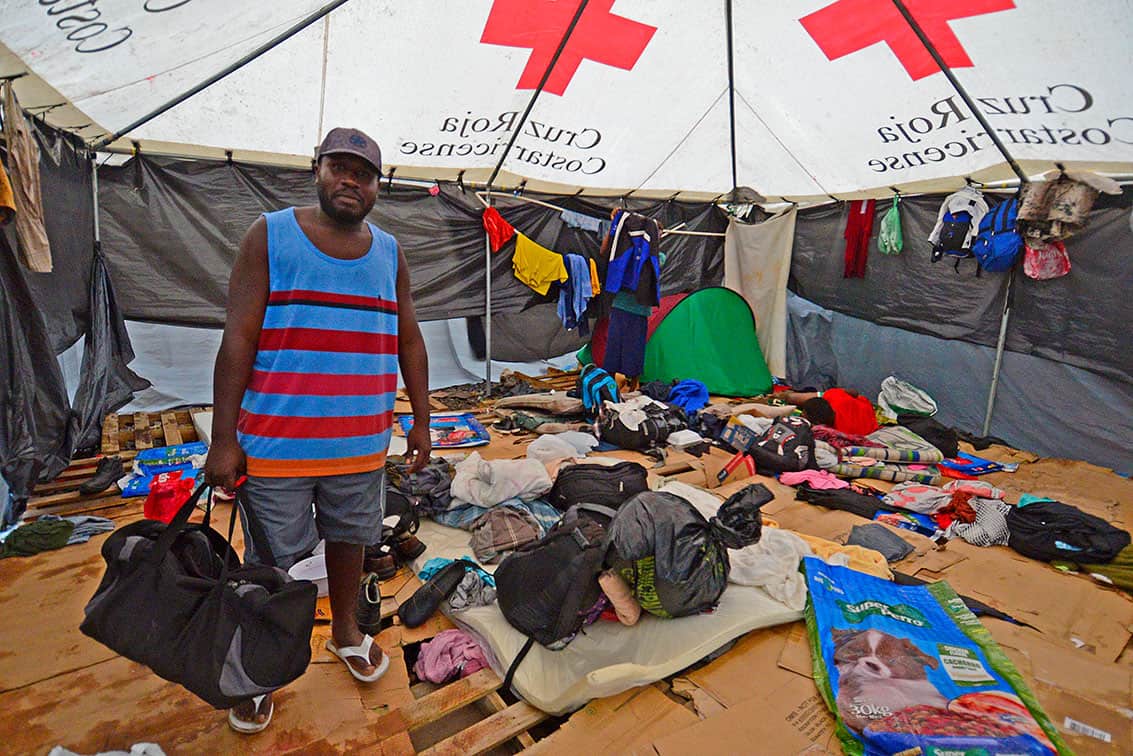 A migrant who claims to be from Congo stands where he sleeps with his duffel bag of clothes beneath a Red Cross tent in Paso Canoas on June 14, 2016. (Lindsay Fendt/The Tico Times)

PASO CANOAS, Puntarenas — It’s too hot to be wearing a puffy black jacket here on the border between Costa Rica and Panama this humid afternoon but it’s one the few items Onal Jean, a 41-year-old migrant from Cameroon, still has so he doesn’t leave it lying around.

A light rain starts to fall in the common ground just south of the Costa Rican customs checkpoint where hundreds of migrants from around the world — Togo, Benin, Cameroon, Haiti, Ivory Coast, Ghana, Nepal, Pakistan — are staying in makeshift tents emblazoned with red crosses. A patchwork of plastic tarps, black and blue, some bandaged with duct tape, hang from the Red Cross tents to keep out the rain.

A stray pair of pink plastic slippers lies in the mud. Small groups of men talk while others wash clothes. A single National Police truck idles in the distance.

Inside the tents, people wait out the rain lying on foam mattresses. Flattened cardboard boxes placed on top of wooden palates provide a makeshift floor to keep people off the wet ground.

“Dogs have a house, this is what I have,” Jean says, gesturing to the cardboard that has gotten wet at the edge of the tent.

Jean’s frustration radiates off him. And he’s not alone. Many in this camp don’t understand why Nicaragua won’t let them pass through and continue their journey to the United States.

“It’s the whole world’s dream to get to the U.S.,” Jean says in a mix of Spanish and Portuguese, “We just want to cross, we don’t have bombs.”

Jean and the other migrants here are free to move about Costa Rica but without a way to cross Nicaragua, they see little reason to leave the few sure things the camp has to offer, namely food, basic shelter and medical attention.

Costa Rica’s official policy is to register the migrants who have crossed into the country illegally, many without formal identification such as a passport. Immigration officials take their fingerprints, record their names and provide the migrants with a piece of paper about the size of a business card that allows them to move about the country as long as they sign in with immigration authorities every 15 days.

Many of the migrants here don’t have a specific place in mind when they say they want to reach the U.S. but Jean says he has family in Queens, New York. Otherwise, maybe Boca Raton, Florida, he says.

The Tico Times traveled to Paso Canoas this week to get an on-the-ground view of the conditions in the temporary camp that authorities want to close by the end of June. Along with hearing stories from migrants, The Tico Times rode along with border police during a patrol and spoke with Red Cross workers about the condition migrants are arriving in. Look for more reporting from the border next week.