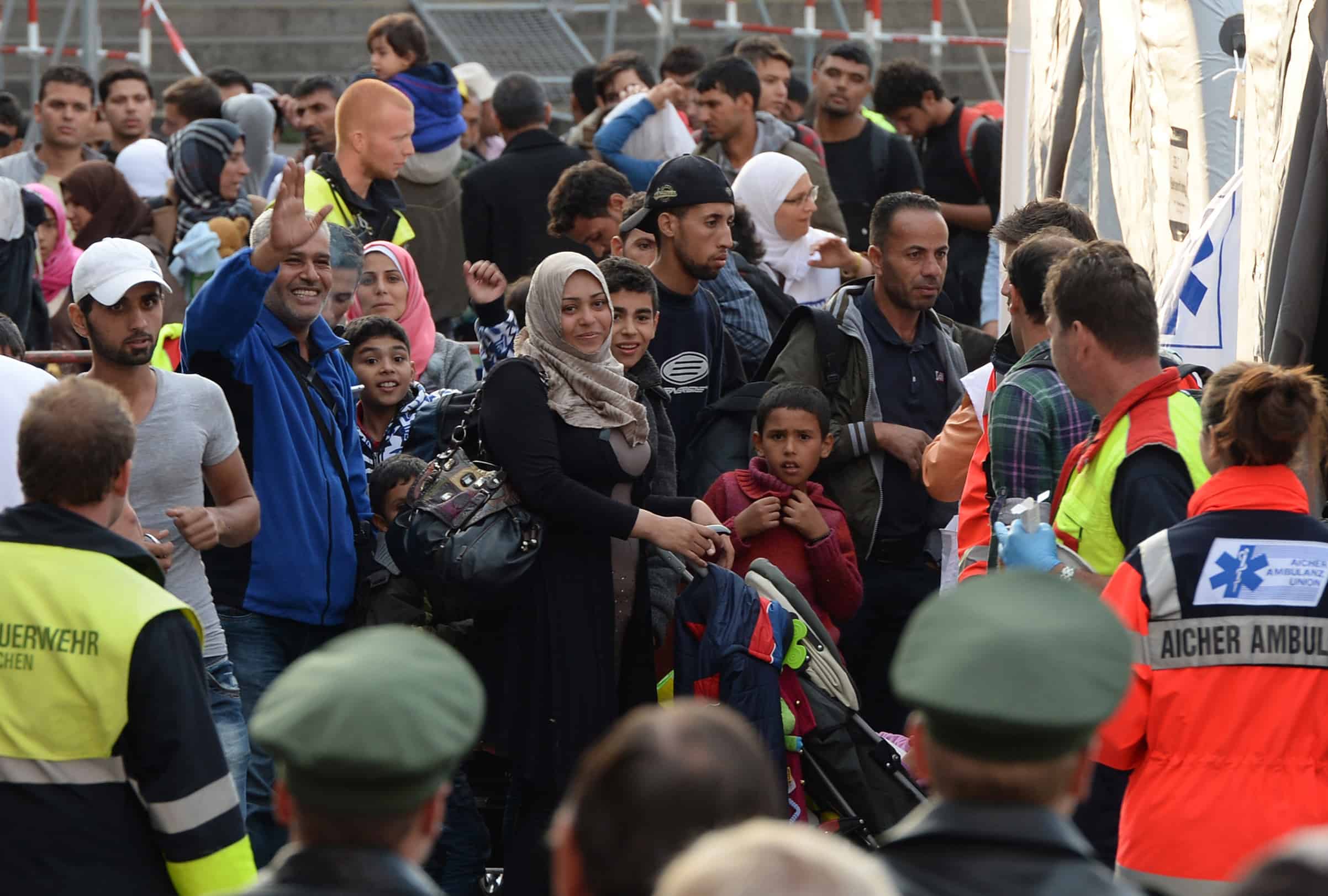 Incoming refugees wait for a short first medical check after their arrival in front of the main train station in Munich, southern Germany, Sept. 5, 2015. Hundreds of refugees arrived in Germany on Sept. 5, 2015 coming from Hungary and Austria. (Christof Stache/AFP)

MUNICH, Germany — A stout Bavarian music teacher brought homemade blueberry crumble because she thought “the refugees must be hungry.” A young German mother coaxed smiles out of terrified children with balloons. But in the throng of well-wishers at the main train station here as streams of Syrians blocked for days in Hungary disembarked, perhaps a 69-year-old Munich janitor best summed up the message of this nation that more than any other in Europe is opening its doors.

“Willkommen!” yelled out the floor cleaner, Peter Schriever, as he held up a homemade sign that read: “Welcome Refugees!”

Just off their train, Syrians Abed Almoen Alalie, his wife, Rukaya, and their five small children could not quite believe what they saw. They blinked. They looked at each other. They held each other’s hands. After being shouted at and manhandled in Hungary — a country that did not want them and tried to stop their passage — Rukaya, 32, stared at the cheering crowd and broke down in tears.

“Germany is the only country that is welcoming us,” explained Alalie, a 37-year-old civil servant from Damascus who said his family was fleeing Syria’s civil war. “Look at them! I feel like we are back among family.”

Finland’s prime minister may have offered his private home to refugees. A couple of thousand Austrians may have banded together on social media to carpool refugees out of Hungary. But in a Europe bitterly divided over how to handle its largest wave of migrants since World War II, it is, this time, the Germans who are coming to the rescue.

Whether they are washing ashore in Greece, or landing first in Italy, the mother lode of migrants are aiming for Europe’s economic powerhouse, a nation that has laid out one of the region’s most generous and accepting asylum policies. After agreeing to take busloads of migrants off Hungary’s hands, for instance, more than 6,000 new arrivals arrived in this beer-loving Bavarian city over just the past 24 hours.

Nationwide, Germany recorded 100,000 migrants last month alone. By the end of the year, authorities are estimating at least 800,000 asylum seekers will come — a number almost equal to the population of South Dakota.

Observers call it part of the burdens of becoming the de facto leader of Europe. Berlin has already been called on to lead the 28-nation European Union through the tribulations of the Greek debt crisis as well as its standoff with Russia over Ukraine — occasionally with less-than-stellar results.

But on the issue of refugees, Germany is, from a humanitarian point of view, leading by example. Last month, Germany unilaterally waived its right to deport Syrians back to the first European Union nation they enter, effectively agreeing to let most of those who are able to make it here stay. That has been backed up by an 87 percent acceptance rate of Syrians who apply for asylum in Germany.

“The fundamental right to asylum does not have a limitation,” German Chancellor Angela Merkel told the German media Saturday. “As a strong, economically healthy country, we have the strength to do what is necessary.”

Merkel, in fact, has gone over the course of just a few weeks from being depicted by angry Greeks as Adolf Hitler to being “Mama Merkel, Mother of Outcasts,” as one Syrian refugee Facebook page now proclaims. One asylum seeker in Germany from Ghana, Ophelya Ade, even named her new baby “Angela Merkel Ade,” according to Der Spiegel.

“Thank you, thank you, thank you, Mrs. Merkel!” said Wahid, a 25-year-old from Damascus who arrived on a train here with thousands of other Syrians who had been blocked for days in Hungary. “You are an angel. You are the savior of the Syrian people!”

Merkel praised by Iraqis:
"I found Islam in her but not in our Parliament"
"More honorable than your most honorable" pic.twitter.com/9W0XEeVrdF

At the crammed Munich train station, arriving streams of dazed refugees were being gently herded into feeding stations and medical aid tents, before being bused to reception centers for hot meals and processing. Locals donated homemade treats and clothing — in fact, so much that the Munich police said they simply could not handle any more.

And yet, there are limits to German generosity, too. Those claiming asylum here from non-war torn nations stand a far higher chance of rejection, with the overall acceptance rate in Germany standing at less than 40 percent. The German far-right is also striking back, with this nation weathering a disturbing spike in neo-Nazi violence, including a series of arsons targeting centers and homes for refugees.

On his Facebook page on Saturday, Ronny Zasowk, deputy chairman of the far-right National Democratic Party of Germany, lashed out at those who are comparing the asylum seekers arriving now to the many thousands of ethnic Germans expelled back to Germany, mainly from Eastern Europe, after World War II.

“The German expellees had the same cultural background, spoke the same language and they did not bring any conflicts or security risks along with them,” he wrote. “It is very different with today’s ‘refugees.’ ”

The surge of new arrivals is indeed stoking broad concerns about how and whether the newcomers — who include many conservative Muslims — will adapt to the liberal norms in a progressive country such as Germany. Language classes, social support and other forms of aid — a single refugee here, for instance, gets about 350 euros ($392) a month in addition to housing — are set to cost Germany many millions.

Some leaders in Europe, such as Hungary’s Prime Minister Viktor Orban, have raised the alarm over the continent’s “Christian identity” being put at risk. But Merkel recently suggested that perhaps Germany should embrace the notion that its national image may stray from one that is mainly Christian and white.

That generally accepting message is getting out, with some nations, including Hungary, blaming German generosity for enticing more and more refugees to make risky trips from the Middle East, Africa and Asia into Europe. Indeed, the migrants stopped on a train by the Hungarians over the past two days shouted out chants of “Germany, Germany, let us go to Germany.”

The Germans, to a far greater extent than the British, the French or others, have opened their hearts — and wallets. According to a poll commissioned by the German public broadcaster ARD and released on Thursday, 88 percent said they would donate money or clothes to refugees or have already done so, while 67 percent said they would volunteer to help. Only 33 percent of those asked said Germany should take less refugees, compared with 37 percent who said they could take in as many as there are now, and 22 percent who said Germany should take more.

The Berlin daily Der Tagesspiegel ran a “how to” piece for people who want to take in a refugee. Martin Patzelt, a national lawmaker from Merkel’s Christian Democratic Union, has taken in two refugees from Eritrea. On his Facebook page, he proclaimed: “I am trying to do my part . . . [by] giving a home to refugees and helping them to integrate into our country.”

When asked why, many here say that in their welcome, they see a measure of redemption for a nation saddled with Germany’s dark past.

“We caused so much suffering many years ago during the war, when we invaded other nations and did many horrible things,” said Schriever, the German janitor who turned out to greet refugees here with a pile of his used clothes.

“Now it is our time to heal those who suffer,” he said.