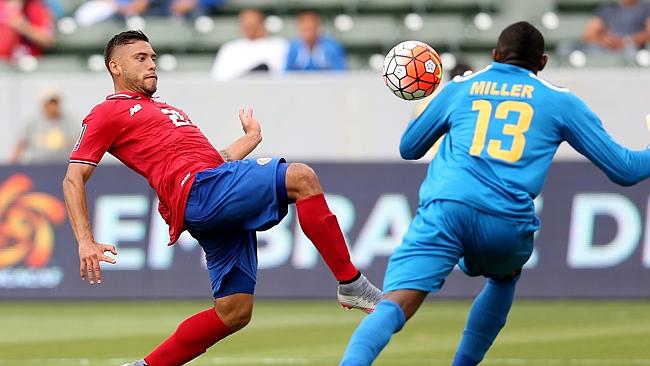 Costa Rica will advance to the Gold Cup's knockout stage after finishing second in Group B with three straight draws. (AFP)

As Canada’s home crowd exploded into cheers at BMO Field in Toronto on Tuesday evening, a nightmarish silence clouded over Costa Rica. For a split second, it looked as if the men’s soccer team would lose to the Canadians and possibly fail to advance from the Gold Cup’s group stage.

Then the yellow-and-red checkered flag waved on the sidelines and the rain-drenched fans returned to a monotonous hum in front of the eventual 0-0 draw between Canada and Costa Rica.

Canada’s Marcus Haber, who scored the would-be game winner off a free kick, was ruled offsides. He was barely an inch beyond a line of defenders when he punched in the discounted score past keeper Esteban Alvarado.

After Costa Rica’s third straight draw, the perennial favorites to win Group B coming into the regional tournament finish in second place behind Jamaica. On Sunday, they will face the runner-up of Group C: either Trinidad & Tobago or Mexico, depending on the result of their game tomorrow.

“We achieved the main goal, which was to get to the quarterfinals,” Alvarado said after the game. “We have a lot of details to iron out but, thank God, we’re moving on.”

The Ticos haven’t just flirted with disaster in the Gold Cup, they’ve been on the verge of making a long-term commitment to it. Canada nearly scored again in the waning minutes when a slippery ball went through Alvarado’s gloves. A seemingly sure chance for Canada to score again was denied when captain Bryan Ruíz’s leg miraculously deflected the ball right at the goal line to keep the match scoreless.

“We’re not satisfied with the tie because we know we have to get better,” Ruíz said. “But today we get to continue into the next round and have the opportunity to improve.”

Players and coaches keep harping on the theme of improvement as the men’s team has been unable to establish dominance over a trio of teams ranked 76th, 88th and 111th in FIFA’s world rankings. And the latest draw keeps Paulo Wanchope still winless as Costa Rica’s head coach, moving La Sele to 0-3-5 under his watch.

“I don’t have doubts about what we’re doing,” Wanchope said leading up to the game with Canada. “I don’t doubt the form or the identity of play that we want, but we have to make some individual adjustments,” he said. “In terms of style and form, we’re doing alright. But we still recognize that things have to improve.”

A starting lineup that left strikers like Joel Campbell and Álvaro Saborío on the sidelines was a risk on Wanchope’s end to find some cohesion for a precarious defense that remains a work in progress. Though Cristian Gamboa was able to return from a leg injury that kept him from Saturday’s 1-1 tie with El Salvador, veteran defender Michael Umaña left the team before its game Tuesday, reportedly to work out a new deal with his club team in Iran.

Short bursts of heavy rain before kickoff and at the end of the first period created a slick canvas for Tuesday’s sloppy game. Costa Rica’s offense did little in the first half until Deyver Vega cut inside for a left-footed shot that required a diving save from Canadian goalie Kenny Stamatopoulos.

Costa Rica’s quarterfinal matchup will kick off at 7:30 p.m. EST on Sunday at MetLife Stadium in New Jersey.