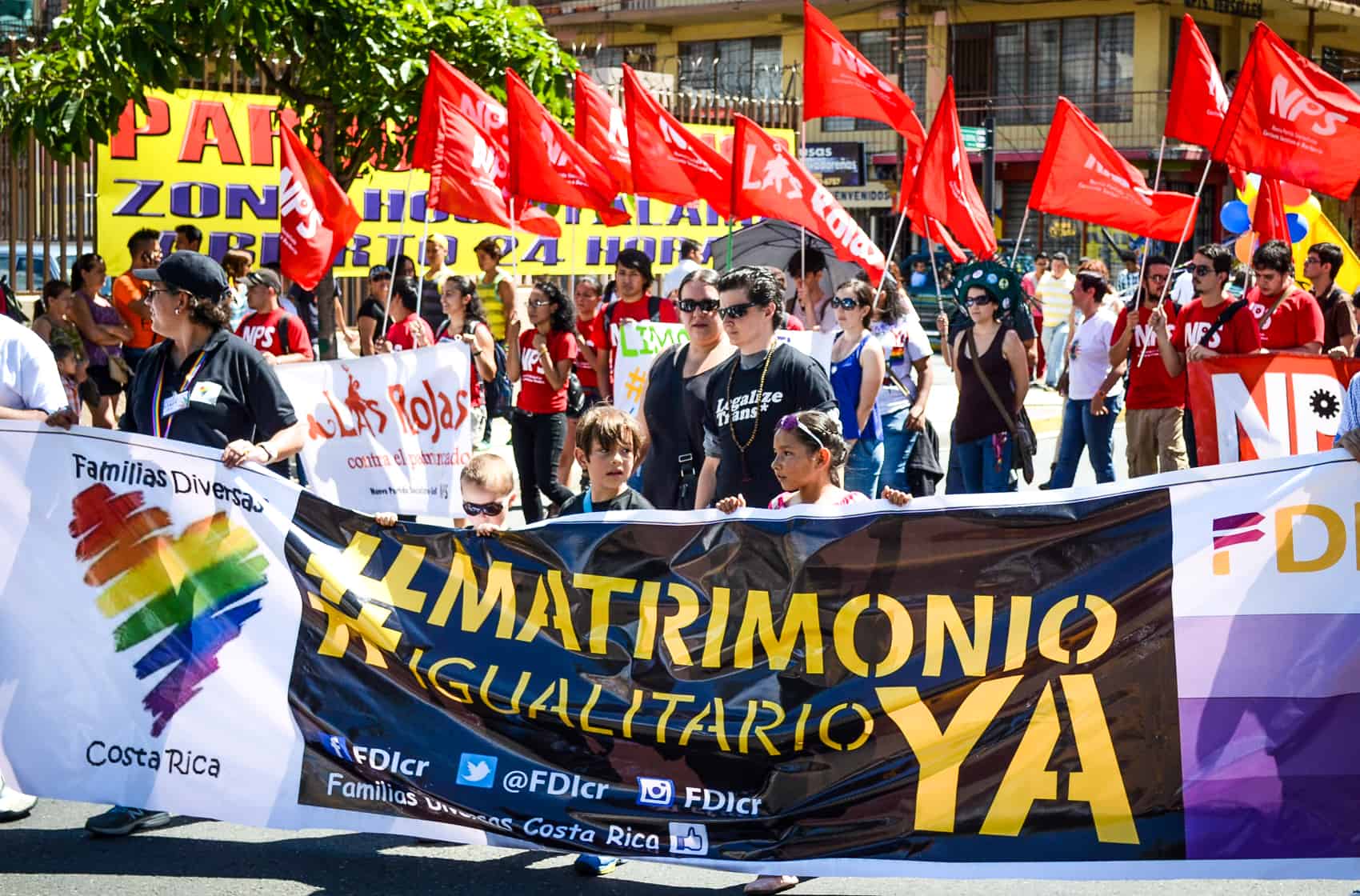 On Tuesday morning, news broke that Gerald Castro and Cristian Zamora, a gay couple in the city of Goicoechea, north of San José, were granted a common-law marriage by the Family Court there. Along with being the first legal recognition of a same-sex relationship in Central America, the decision could set an example for judges elsewhere in the country to recognize gay relationships and even adoption. But both supporters and opponents of the decision expect a forthcoming legal battle over the landmark ruling.

Common-law marriage grants all the same benefits of a traditional marriage in Costa Rica, but requires the approval of a judge after the couple has been together – but not necessarily lived together – for at least three years. It guarantees partners the rights to inheritance, to social security and public insurance benefits and to visit the other person in the hospital.

Costa Rica does not currently recognize gay marriage but a bill is pending in the Legislative Assembly that would approve civil unions here.

The judge in Goicoechea granted the common-law marriage in part through an interpretation of an amendment to the Youth Code in July 2013 that its sponsor, then-lawmaker José María Villalta of the Broad Front Party, a former presidential candidate, claimed would legalize gay marriage. The amended code said that common-law marriages should be granted regardless of gender and “without discrimination against their human dignity.” Supporters of the move are calling it a “golazo” (in football terminology, roughly, a stunning goal) by Villalta who slipped the language into the amendment without Evangelical lawmakers – who staunchly oppose gay rights – even noticing.

After then-President Laura Chinchilla signed the bill, a flurry of gay couples applied for legal recognition but none were granted until now. There is a catch: The Youth Code only applies to Costa Ricans between the ages of 12 and 35. That could lead to legal challenges, some analysts predict. One argument is that it’s discriminatory, because it doesn’t apply to Costa Ricans of all ages. Others speculate that Costa Rica’s Family Code could supplant the Youth Code. Either way, the judge’s ruling may prompt a case before the Constitutional Chamber of the Supreme Court, or Sala IV.

“This is a big step forward. This is the first time that the law has been recognized as such,” said Marco Castillo, president of the lesbian, gay, bisexual and transgender advocacy organization Diversity Movement.

“I know of nine other cases presented that would have to be approved too,” he said. The cases were in Heredia, San José, Guadalupe, Cañas and Desamparados.

Both Castillo and Madrigal said that they were hopeful that the Goicoechea decision would encourage judges elsewhere to recognize same-sex common-law marriages now that the precedent has been set. Family court judges, however, retain autonomy in their power to grant common-law marriages regardless of the sex of the couple so there is no guarantee that other applications elsewhere would be successful.

Francisco Madrigal told The Tico Times that there is no law banning LGBT individuals from adopting children but gay couples have not been allowed to because their relationship was not recognized by the state. The CIPAC representative said that now that a gay couple have been recognized by the government it could open a new pathway for LGBT families to adopt.

“This is an important accomplishment but it gives us a panorama of how much more we need to do,” Madrigal said.

The CIPAC representative said that there is still much work to be done in the Legislative Assembly. Advocates were hopeful that the recent decision could bolster the bill to legalize same-sex civil unions in Costa Rica, which would allow gay and lesbian couples to enjoy the benefits of marriage without applying to a judge.

Castillo acknowledged that opposition was strong, especially with conservative Evangelical parties. The current gay civil union bill is grinding though the Legal Affairs Commission with 1,300 amendments proposed by former Christian conservative lawmaker Justo Orozco, the daily La Nación reported. Some critics – including at least one lawmaker from the Evangelical National Restoration Party – have threatened to go after the judge on charges of breach of public duty.

Nevertheless, the first gay common-law marriage in Central America is one of several LGBT accolades Costa Rica has won in the last several years. Same-sex couples can insure their partners with the Costa Rican Social Security System and visit their partners in the hospital, and Casa Presidencial raised that rainbow flag over the president’s office. The Solís administration also issued an executive order banning discrimination based on their sexual orientation or gender identity in public services.

Correction: An earlier version of this story incorrectly stated that the judge had interpreted an amendment to the Family Code in July 2013. It was actually the Youth Code. We regret the error.