Cuban capitol building is renovation in marble and symbolism 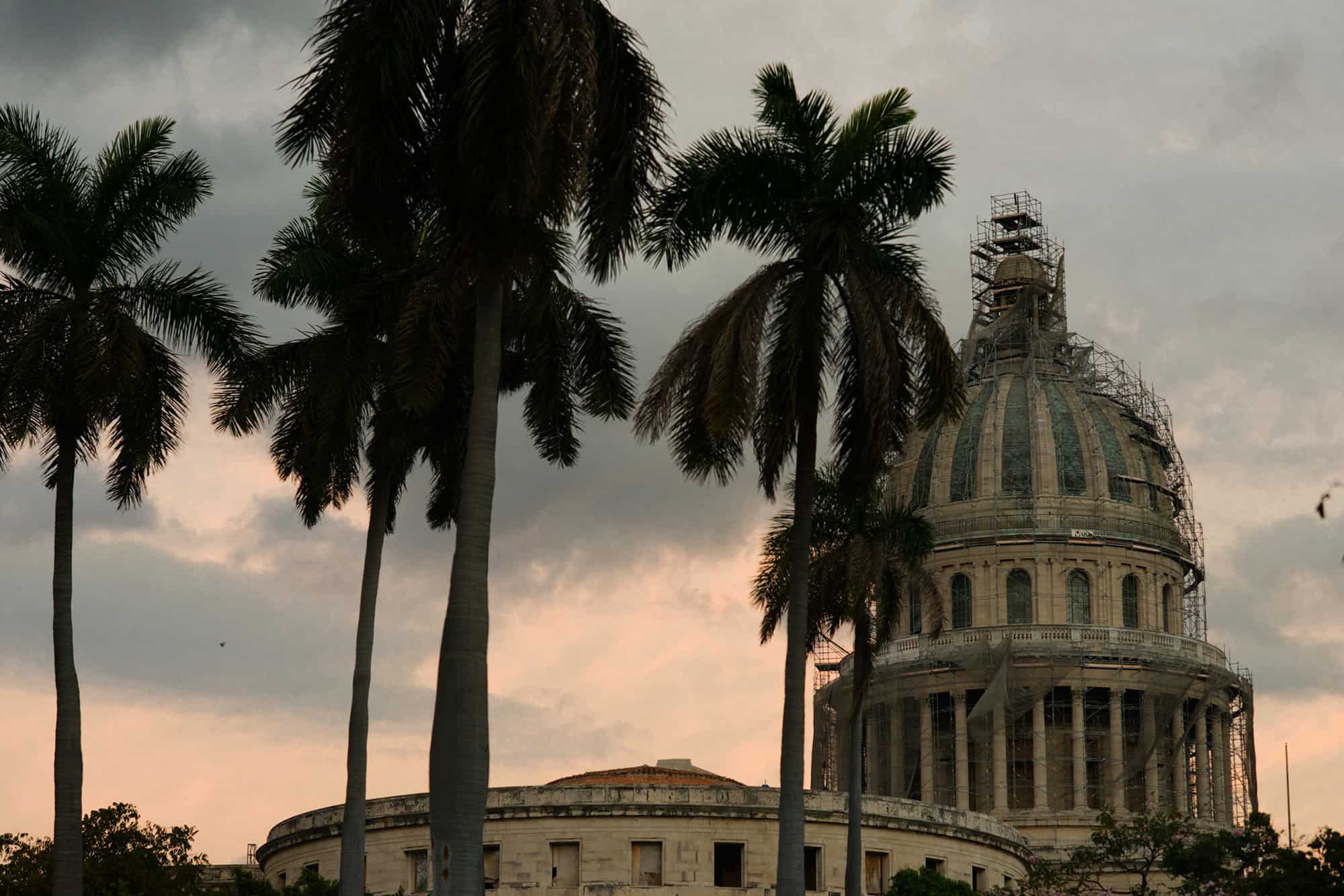 The Cuban Capitol building in Havana, shown on Jan. 29, 2015, is undergoing a major renovation. In conjunction with the opening of the building, a park opened across the street featuring busts of Pan-American leaders and a ceiba tree planted with soil from all the Pan-American countries. (Washington Post photo by Sarah L. Voisin)

HAVANA — Like any revolution, the one that upended this island 56 years ago tried to break with the past by burying symbols of the old political order.

None stood larger than the resplendent Cuban capitol building, “El Capitolio,” that towers over the heart of Old Havana and was inspired by the U.S. Capitol in Washington. To Fidel Castro and his rebel followers, the Capitolio’s opulence and grandeur reeked of waste and wannabe Americanism.

Castro took power in 1959 and dissolved Congress, emptying the Capitolio’s soaring marble and granite halls. The building, too, was demoted, repurposed as the new headquarters of the humble science ministry. Just 30 years after its completion, Cuba’s grand temple of democracy and patriotism was virtually abandoned to the bats and the dust.

Today the building is undergoing a rehabilitation that is not only physical but symbolic too. Its landmark dome — slightly taller than the one in Washington — is draped in safety netting. Hundreds of Cuban laborers are busy preparing the Capitolio for a return this year to its original purpose, as the home of Cuba’s legislative branch.

“After the Revolution, co-habitation with a structure of the past was impossible,” said Havana City Historian Eusebio Leal, whose office is in charge of renovating the building, as well as countless other faded architectural wonders throughout the city’s long-neglected historic core.

“The time has come for the Capitolio to reclaim the great symbolism that it was built for,” said Leal in an interview. A worker repairs the stairs outside the Cuban capitol building in Havana on Jan. 27, 2015. Though Cuba’s lawmaking body, the National Assembly of People’s Power, is seen as a rubber-stamp legislature, voting unanimously with no debate, its return to the capitol has symbolic significance. Washington Post photo by Sarah L. Voisin

See also: As talks with US begin, Cubans anticipate changes in their lives

Cuban President Raúl Castro has insisted his country’s one-party system is not up for negotiation, even as the United States and Cuba move to restore diplomatic relations.

But in a quieter way, his decision to re-occupy the Capitolio is at least a symbolic step toward a potentially different relationship between Cuba’s government and its citizens.

Cuba’s lawmaking body, the National Assembly of People’s Power, has long been a rubber-stamp legislature that typically convenes twice a year, voting unanimously to approve a top-down agenda with no debate or dissent.

The 614-member body meets in the Havana Convention Center, the Palco, set in a remote, heavily guarded suburb that is almost entirely removed from ordinary Cuban life.

Making the Capitolio the legislature’s headquarters once more places it right back in the throbbing, crowded heart of the city, adjacent to some of Havana’s poorest neighborhoods. The legislative chamber of the Cuban capitol building hasn’t been used for its intended purpose since 1959, when Fidel Castro dissolved Congress, emptying the Capitolio’s soaring marble and granite halls. Washington Post photo by Sarah L. Voisin

It is as Cuba’s forefathers intended. Work on the Capitolio began in 1926, after previous attempts to erect a capitol building failed or were abandoned. President Gerardo Machado ordered the palatial structure built on the swampy site of the city’s old railway station. The Cuban Treasury was flush with sugar money.

A U.S. firm with an extensive portfolio on the island, Purdy and Henderson, was hired to execute the project, along with Cuban architects and some of Europe’s most famous designers and craftsman. The building took 5,000 workers, $17 million and just three years to complete, a feat that is still used to chastise today’s notoriously less-efficient Cuban construction crews.

No expense was spared. Framing the Capitolio’s grand entrance are 12 massive stone columns, each five feet thick, and two 21-foot bronze figures representing Work and Virtue, by the Italian sculptor Angelo Zanelli. Inside, under the soaring steel-and-stone dome, is Zanelli’s 48-foot bronze Statue of the Republic, an Athena-like female figure plated in gold that weighs 30 tons and remains one of the largest indoor statues in the world.

Directly beneath the dome was a giant 24-carat diamond set into the floor to mark the zero-kilometer for Cuba’s national highway system. According to Cuban lore, the gem once sat in the crown of Russian czar Nicholas II.

Recommended: Quietly, Cuba, US have been on same team against illegal drug trade The Cuban capitol building in Havana, shown on Jan. 27, 2015, is undergoing a massive restoration. With lawmakers gone from the building since 1959, the building has served as the headquarters for the country's Science Ministry. Washington Post photo by Sarah L. Voisin

The splendor didn’t end there. The main hall, The Hall of Lost Steps, is so called because its arched ceiling is so high and so ornate that it muffles any echo from footsteps. Sculpted bronze panels depicting Greek classical scenes and key episodes of Cuban history are everywhere. The main library — dedicated to national hero Jose Martí — is paneled from floor to ceiling in three stories of mahogany and cedar, beneath four one-ton Tiffany chandeliers.

“Still smells like a cigar box,” said Marilyn Mederos, the chief architect for the rehabilitation project, offering a behind-the-scenes tour of the restoration effort. “Even after all these years.”

The Capitolio’s extravagance has made it difficult and costly to renovate, and Leal declined to give a cost estimate. But much of the building remains in good shape. The rehabilitation work is projected to continue until 2017, but the City Historian’s office said it will re-open parts of the structure to guided tours this year to allow visitors to see progress made so far.

On the lower floors one recent day, crews winched out corroded 1920s electrical cables as thick as a baseball bat. In workshops along the roof, students in gloves and safety goggles scrubbed grime from bronze door fixtures using acid-dipped brushes. Hard-hat workers on ropes power-washed the exterior granite walls until they glowed white again. Marilyn Mederos, left, chief architect for the restoration of the Cuban capitol building in Havana, discusses one of the stained glass windows with Marisol Marrero, the chief civil engineer of the project, on Jan. 27, 2015. Washington Post photo by Sarah L. Voisin

The building is not a copy of the U.S. Capitol. Though the domes are similar, the two structures are different in shape. The older U.S. Capitol, whose dome was completed in 1866 and is now under repair, is slightly larger and more angular.

Cuba’s Capitolio was also designed as a bicameral structure, but it’s more of a monolith, with rounded ends and several interior patios meant to circulate air in the stifling Caribbean heat.

The two structures are siblings in spirit, though, built as awe-inspiring shrines to New World democracy that could rival the greatest European cathedrals and palaces.

Cuba’s pride in the building was not universal. In 1933, with the country dragged into the Great Depression along with the United States, an angry crowd rioting on the Capitolio steps directed its rage at the bronze bas-relief door panel depicting Machado, who had turned increasingly despotic. They chiseled off his face.

“But it should be noted,” Leal said, “they left all the other panels alone.” More than 300 workers are involved in the restoration of the Cuban capitol building in Havana, shown on Jan. 27, 2015. The building’s design is based on the U.S. Capitol. Washington Post photo by Sarah L. Voisin

By the 1950s, many Cubans had come to resent the building, viewing it as a white elephant of corruption and misplaced priorities in a country with just one university and too many living in poverty.

As his crews work to restore the building, Leal, too, has tried to rehabilitate the Capitolio’s legacy. He notes that the Cuban Constitution of 1940 – widely considered a high-water mark for Cuban democracy – was signed in the building.

Leal is also preparing a ceremony next year that will dedicate the Tomb of the Unknown Mambi, honoring the 19th-century independence fighters who rose up against Spanish colonialism with little more than machetes and old muskets.

The original intent of the Capitolio’s designers was for the building to edify Cuban patriotism by glorying its founding fathers, and today those 19th-century figures, especially Jose Marti, remain sacred to both sides of the Castro-era ideological divide.

It is not hard to imagine that they could some day play a unifying role again. The Capitolio’s cavernous halls should be large enough even for a reconciliation of that magnitude.

“For me, what it represents is the possibility for Cubans to make things that are beautiful, that are great,” said Marisol Marrero, the project’s chief civil engineer. “It shows what the Cuban people have done, and are capable of doing in the future.”

Recommended: Rodrigo Carreras, Costa Rica’s envoy to Israel, gets ready for his next challenge: Cuba