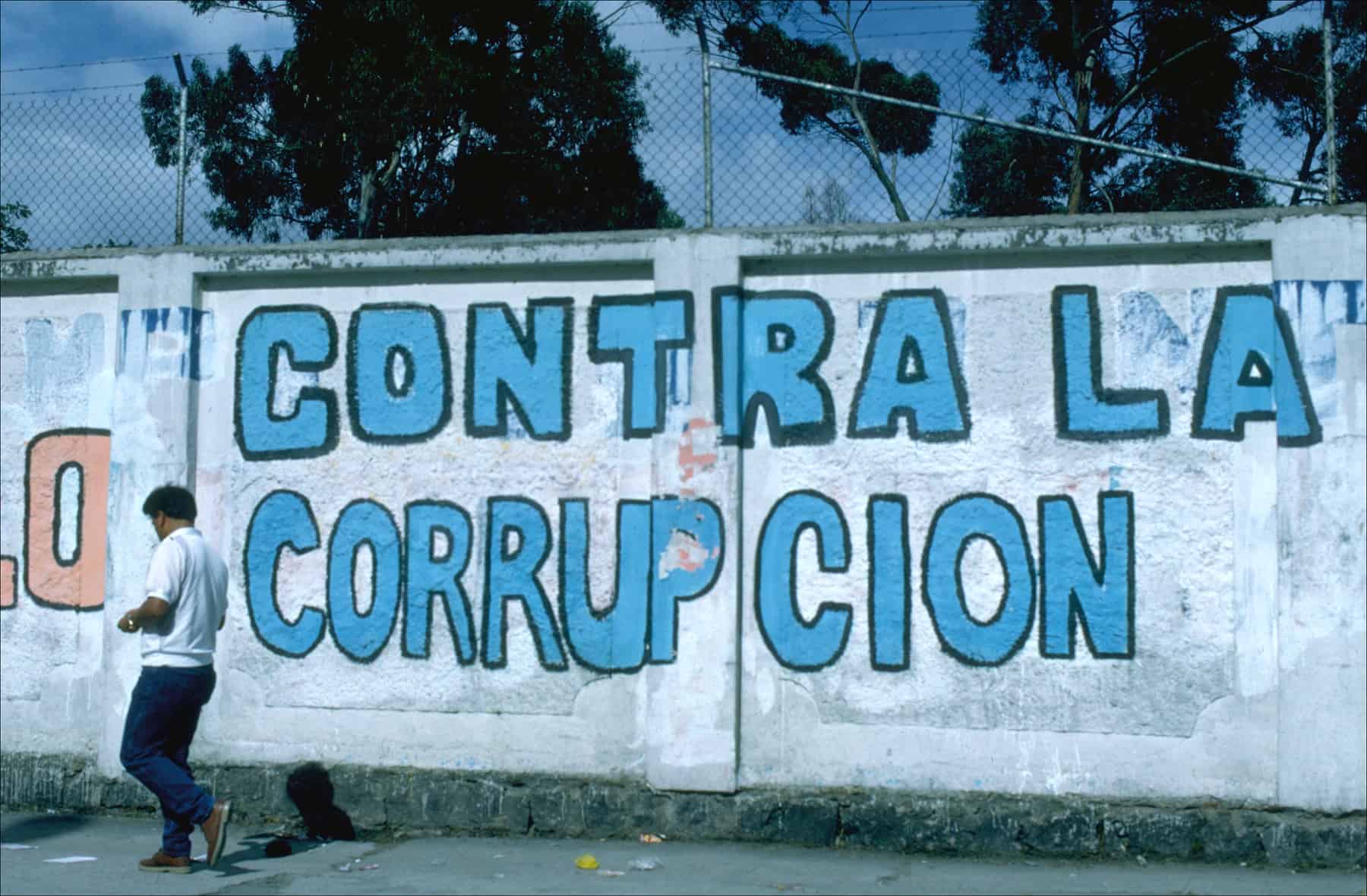 WASHINGTON, D.C. – Ticos like to complain about bribery, tax evasion, kickbacks and other dirty deeds, but business executives and foreign investors still perceive Costa Rica as the least tainted country in Central America.

Transparency International’s 2014 Corruption Perceptions Index, released earlier this month, shows Costa Rica scoring 54 on a scale of zero to 100, with zero being the most corrupt and 100 representing the cleanest. Costa Rica tied for 47th place worldwide this year, along with Hungary and the African island nation of Mauritius.

That wasn’t very impressive when compared to Chile and Uruguay, which both scored 73, but it was far better than El Salvador (which scored 39), Panama (37), Guatemala (32) and Honduras (30).

Nicaragua, with a score of 28, was perceived as the most corrupt nation in Central America, though not in all of Latin America. That title goes to oil-rich but economically troubled Venezuela, which scored 19. Tying for last place among the 175 nations in the TI survey were North Korea and Somalia, with a score of only 8.

“We’ve been doing this index for 15 years, and Costa Rica has always ranked the highest in Central America,” said Salas, speaking from TI headquarters in Berlin. “It’s good, but the countries you’re comparing Costa Rica with don’t have very strong institutions. For example, the judiciary is definitely more professional and more autonomous [than elsewhere in the region]. In Nicaragua, the selection of judges is often politicized. To fight corruption, you need an autonomous justice system, and in Costa Rica, we have examples of presidents who were involved in bribery being put on trial.”

Salas said that in 2014, Latin American countries scored an average of 40 on the zero-to-100 scale – slightly below the worldwide average of 43.

Román Macaya, Costa Rica’s ambassador in Washington, said the importance his country places on transparency in all official dealings is key to the findings in the CPI.

“This current government came into office based on an anti-corruption platform,” Mayaca said. “I’m glad that we ranked fairly well by Latin American standards, and Costa Rica usually does in these types of studies, but people always want more.” Demonstrators in Managua take part in a march against the construction of an inter-oceanic canal on Dec. 10, 2014. Inti Ocón/AFP

While Nicaragua – the poorest country in Central America – also scored lowest on the index, Panama has the region’s highest per-capita income, yet is viewed as significantly more corrupt than Costa Rica, and slightly more so than El Salvador.

“One would think poverty is an important factor, but it is not,” Salas told us. “Panama is strongly perceived as a country with a bad reputation for money laundering. And of all Latin American countries, Venezuela is at the bottom, but it’s relatively rich. It’s not the poverty of a country which matters but the weakness of its institutions.”

“Perceptions don’t always precisely line up with reality, but they certainly influence peoples’ decisions about whether they’re going to invest [in a specific country],” he said. “In that sense, they’re important.”

“The abuses of authority in Nicaragua are well documented and do not start with the Ortega family, but go back decades,” said Orozco, a Nicaraguan-born economist who specializes in migration, remittances and development issues. “The jailing of Arnoldo Alemán in 2003 is only an example. However, during the Sandinista government, the extent of corruption – either because of lack of accountability or transparency – is widespread.”

Orozo added: “The judicial system depends on decisions emanating from the party cadres of the FSLN, whereas the executive maintains a close relationship with the elites in the private sector, with whom there is regular consultation on what laws to bring to Congress. The Congress itself is pretty much ineffective as a representative body of the citizenry. Moreover, many authorities use public resources to buy public opinion.”

Nicaragua’s dismal ranking in the CPI coincides with increasing controversy over the Ortega government’s plans for a $50 billion transoceanic canal passing through Lake Nicaragua. The Chinese-funded project – which would compete with the Panama Canal – sparked protests Wednesday near El Tule, 260 kilometers from Managua, in which several demonstrators and some police officers were injured.

Orozco said the government has failed to establish any system of accountability or transparency to govern construction of the mammoth canal.

“Every significant policy issue, be it construction of the canal, the management of oil revenues or the intervention of private companies to silence journalists, is tainted by government abuse of authority to protect the regime, the family or any close friend of the Ortega consortium,” Orozco charged. “What is more frightening is that the government uses the legal system to pre-empt any sign of corruption while performing illegitimate activities. Protests over construction of the canal are an example of the extent to which there exists abuse of political authority.” “Deeds… Not Words,” declares this propaganda billboard trumpeting the expansion and remodeling of Managua’s Sandino International Airport by Arnoldo Alemán, who was Nicaragua’s president from 1997 to 2002. In late 2003, Alemán was sentenced to 20 years in prison on charges of money-laundering, fraud, embezzlement and electoral crimes. The following year, Transparency International named him the ninth most corrupt leader in modern history. Larry Luxner/The Tico Times

Belize, the only English-speaking country in Central America and the smallest of the region’s seven countries in population, was not included in the TI index.

“Remember, this is a perception index. It’s telling you the perception that market analysts or people in the private sector have of corruption in the public sectors of those countries,” said TI’s Salas. “For a country to be included in our ranking, we need at least three surveys to have the most objective picture of the country as possible.”

These surveys are conducted mainly by institutions such as the World Bank, the World Economic Forum and the Economist Intelligence Unit, he said.