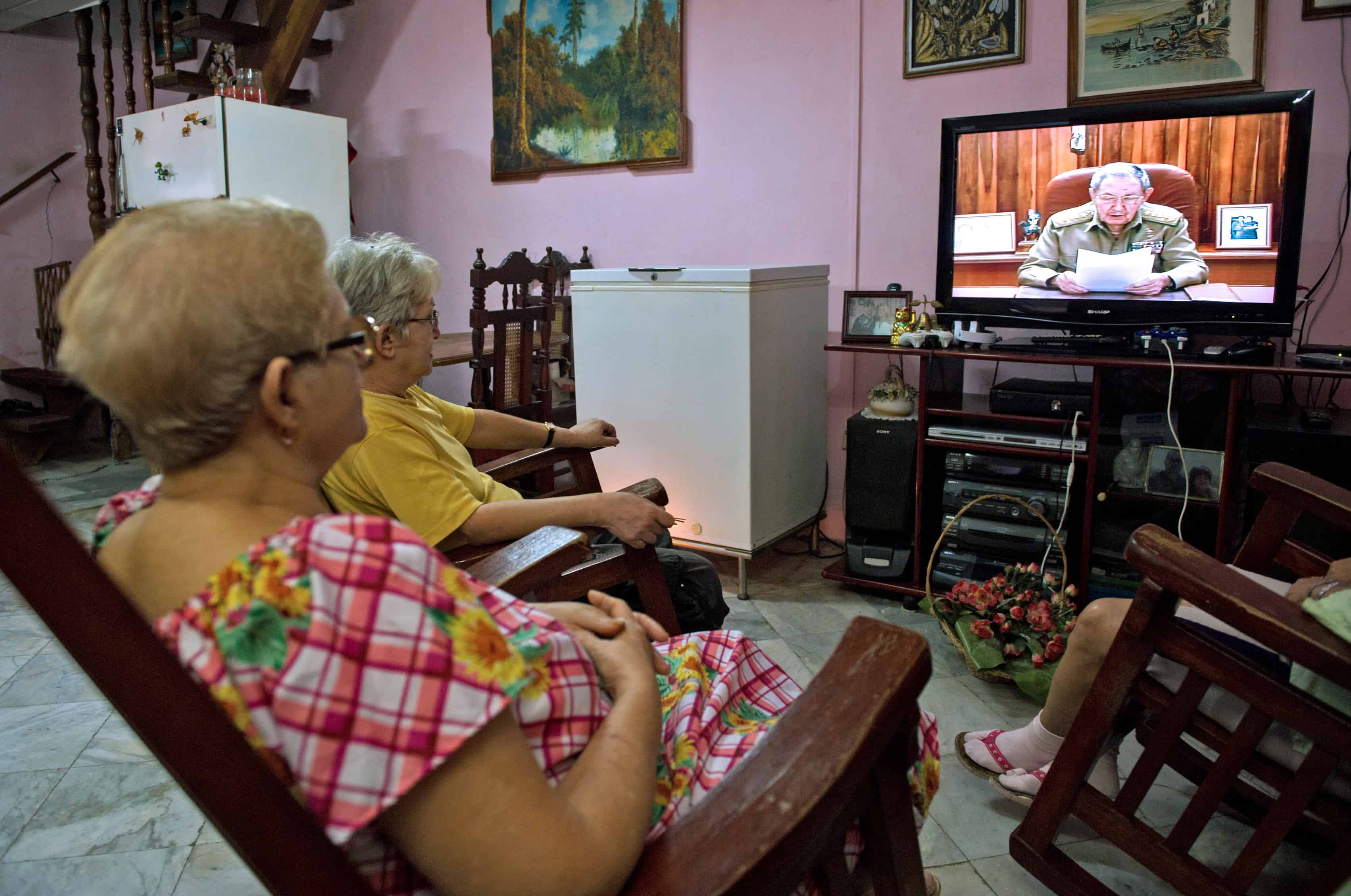 Cubans watch President Raúl Castro on TV as he addresses the country on Dec. 17, 2014 in Havana. Castro said that Cuba had agreed to reestablish diplomatic ties with Cold War enemy the United States after a prisoner swap paved the way to a historic breakthrough. (Yamil Lage/AFP)

MONTERREY, Mexico — Latin American leaders across the political spectrum praised U.S. President Barack Obama’s decision announced on Wednesday to reestablish diplomatic relations with Cuba, a move that could spark more investment in the Caribbean island and ease Cold War-era resentments throughout the hemisphere.

Hours after the announcement, the Colombian guerrilla group known as the Revolutionary Armed Forces of Colombia, or FARC, declared from Havana a unilateral and indefinite cease-fire as part of ongoing peace talks hosted by Cuba.

From hard-line leftists in Venezuela to more pro-U.S. powers such as Mexico and Colombia, Latin Americans welcomed in glowing terms the thawing of relations between the decades-long rivals.

Colombia’s president, Juan Manuel Santos, said he hoped the changes paved the way to reaching “the dream of having a continent where there is total peace.”

Venezuela’s Nicolás Maduro, the most anti-U.S. leader in Latin America, hailed the news as a “historic victory for the Cuban people.” Venezuela has been the staunchest ally of Cuba in the region and sends it millions of barrels of oil each year while regularly bashing the United States for alleged attempts to destabilize the nation.

In a televised speech from a conference in Argentina, Maduro said, “We have to recognize the gesture from President Barack Obama, a courageous and necessary gesture.”

The United States’ embargo against Cuba has long been opposed by Latin America. That trend has accelerated in recent years as more South and Central American countries are led by presidents with left-wing leanings, including those, such as Brazil’s Dilma Rousseff, who came of age as militants opposing repressive military regimes.

“For us, social fighters, today is a historic day,” Rousseff said at the same conference of South American countries in Argentina. “We imagined we would never see this moment.”

The legal restrictions under the U.S. embargo have made Cuba a riskier country to invest in for outside nations, including those in Latin America, which can be penalized for banking transactions with Cuba that pass through the United States. Obama’s announced changes would make Cuba a less-risky bet, according to regional analysts.

“Business relationships with Cuba will be much simpler,” said Geoff Thale, the director of operations for the Washington Office on Latin America.

Thale, a Cuba expert, was in Havana on Wednesday and said Cubans he has met since the announcement have hugged him and broken into tears of happiness. He said he saw a demonstration of hundreds of people in support of the news. “It’s the first I’ve ever seen in Havana,” he said. “I’m thrilled.”

The decision to ease restrictions comes ahead of the Summit of the Americas planned for April in Panama. After the last summit, some Latin American leaders threatened to boycott if Cuba wasn’t included in the future. This year, for the first time, Cuba was officially invited. The Obama administration had faced consistent pressure from Latin American countries to ease its Cuba policy.

“It’s long since time,” said Lorenzo Meyer, a prominent Mexican historian. “This has been a prolongation of the Cold War to absurdity.” Cuban students march down a street in Havana, on Dec. 17, 2014, to celebrate after Washington released three Cuban spies -- heroes in Cuba -- who had been in a U.S. prison since 2001. AFP/AIN – Roberto Morejón

The Organization of American States, which hosts the summit, also praised the decisions. Its secretary general, José Miguel Insulza, called the decision one of “great vision on both sides, because this conflict, which has significant negative implications for citizens of both countries, has stagnated politically for too long.”

For Mexico, one of the two largest economies in Latin America, experts predicted it could have a favorable impact on businesses that have been hesitant to invest in Cuba and risk their relations in the U.S. market. They expected more Mexican tourists to travel there.

“Without a doubt, the elimination of financial restrictions, the possibility that United States citizens can open bank accounts, use credit cards, and increase the remittances limit are a watershed in this process of restoration of bilateral relations,” Mexico’s foreign ministry said in a statement. Alan Gross smiles during a press conference after being released by Cuba on Dec. 17, 2014 in Washington, D.C. Gross, a U.S. contractor jailed on the communist-ruled island since 2009, was released amid signs of an imminent thaw in ties between the Cold War foes. Saul Loeb/AFP

Analysts in Latin America said they believed Cuban politics in the post-9/11 era have justified closer relations with the United States. Cuba has sent large teams of doctors to Africa to fight Ebola and helped over the past two years in mediating the decades-long conflict in Colombia. The announcement by the FARC, published online Wednesday, said their cease-fire would last indefinitely unless their guerrillas were attacked by security forces.

Santos, the president, tweeted that Cuba and the United States are an example that “no matter how great our divisions, we can overcome them with dialogue and perseverance.”

Raúl Benítez Manuat, a professor and security analyst at the National Autonomous University in Mexico City, said Cuba has shown that it is not a security threat to the United States.

“No one can accuse Cuba of having relations with governments that could injure the United States with terrorist attacks. Also, Cuba has had much success in terms of border security and the transit of cocaine,” he said. “And these two elements, without a doubt, help to justify an opening in diplomatic relations.

“Without a doubt,” he said, “this is good news for Latin America.”