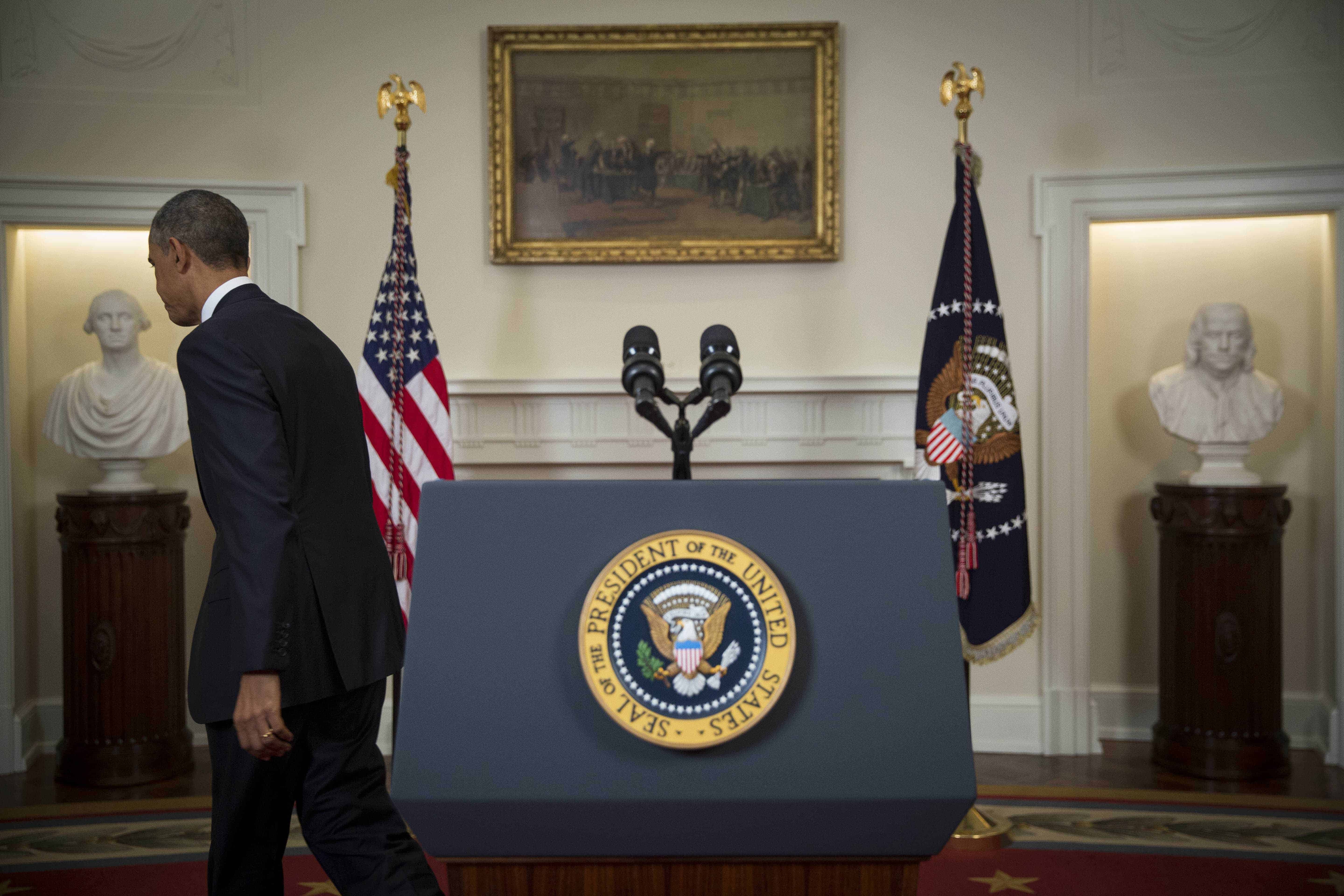 U.S. President Barack Obama departs after delivering an address to the nation from the Cabinet Room of the White House, on Dec. 17, 2014. Obama spoke about the release earlier that day of Alan Gross, who spent five years in a Cuban prison. (AFP/Pool/Doug Mills)

WASHINGTON, D. C. — It took six years and months of secret negotiations, but on Wednesday, President Barack Obama finally delivered on a pledge that cuts to the heart of his foreign policy. It’s a view of the world that emphasizes pragmatism over ideology, engaging enemies rather than isolating them and setting aside historic grievances in order to reshape the future.

Cuba is a flyspeck of an island that long ago ceased to be a threat to the United States. But it retains outsize political influence both domestically and on the global stage, a reality that the president acknowledged on Wednesday when he described the two countries as bound “in a unique relationship, both friend and foe.”

“I believe that we can do more to support the Cuban people and promote our values through engagement,” Obama said in remarks delivered from the Cabinet Room. “After all, these 50 years have shown that isolation has not worked. It’s time for a new approach.”

When he ran for president in 2008, then-candidate Hillary Rodham Clinton called Obama naive for saying that he would be willing to engage in talks with dictators and world leaders hostile to the United States without preconditions. Since then, Republicans have criticized him for not being tough enough with the U.S.’ enemies, chastising him for not being more willing to use tougher, coercive sanctions in some cases and the threat of military force in others. Some of those criticisms resurfaced in the hours after the president announced his historic deal with Cuba on Wednesday.

“These changes will lead to legitimacy for a government that shamelessly, continuously abuses human rights,” said Sen. Marco Rubio, R-Fla. “But it will not lead to assistance for those whose rights are being abused. It is just another concession to a tyranny by the Obama administration rather than a defense of every universal and inalienable right that our country was founded on and stands for.” Sen. Marco Rubio (R-FL) reacts to U.S. President Barack Obama's announcement about revising policies on U.S.-Cuba relations on Dec. 17, 2014 in Washington, D.C. Rubio called the president a bad negotiator and criticized what he claimed was a deal with no democratic advances for Cuba. T.J. Kirkpatrick/Getty Images/AFP

But with the Cuba breakthrough, and the recent deal on climate change between the United States and China, Obama has shown a willingness to expend political capital to secure new relationships with old antagonists and advance solutions to conflicts that once seemed intractable. Last year, he became the first U.S. president to speak with a leader of Iran in decades, although whether that diplomatic breach can be repaired remains an open question.

Each of these deals reflects Obama’s “instinctive view that engagement with even problem countries is a better way to bring them into the international community than isolation,” said Samuel Berger, who served as Bill Clinton’s national security adviser.

Obama’s 15-minute speech outlining his Cuba policy read like his entire foreign policy philosophy in microcosm. He placed heavy emphasis on strengthening civil society, boosting economic ties and fostering the free flow of information between Cuba and the rest of the world, specifically the large and successful Cuban American population.

While he acknowledged the limits of this approach — “I do not expect the changes I am announcing today to bring about a transformation of Cuban society overnight” — the president said it would “help the Cuban people help themselves as they move into the 21st century.”

Many of the president’s new policies, such as easing of banking transactions, seemed specifically tailored toward producing bottom-up change through an emerging class of self-employed Cubans who are less dependent on the state, said Harold Trinkunas, who directs the Brookings Institution’s Latin America Initiative.

White House officials and the president’s allies sought to cast the president’s bold move as bigger than just Cuba. “This is a president who believes were are better off working with others,” said Ivo Daalder, who served as U.S. ambassador to NATO under Obama. “He rejects the idea that going it alone makes us stronger.” Controversy over the U.S. trade embargo consistently dominated regional meetings, such as the Summit of the Americas, and inhibited cooperation on issues such as counterterrorism, drug trafficking and humanitarian relief.

At the United Nations, 192 nations recently cast votes urging the United States to lift the embargo. Only two countries voted to retain it. “I think we were joined by Palau in that vote,” a senior administration official told reporters Wednesday. In fact, Palau abstained.

In the first hours after the president’s speech, news of the change reverberated around the world. Some of the president’s backers expressed hope that the historic deal could give the U.S. leverage in places such as Russia or Iran, where citizens are feeling the sting of economic sanctions and increasing global isolation.

“The average Russian has to be asking right now, ‘Where is Putin taking us?’ as he stands in line to change his rubles into hard currency,” said Zbigniew Brzezinski, a trustee at the Center for Strategic and International Studies.

The deal with Havana, though, also represents a gamble for a president who has long believed that more talking with oppressive governments and more trade will lead to more political freedom.

“That hasn’t happened with China,’ said Michael McFaul, a former U.S. ambassador to Russia and frequent Obama administration foreign policy adviser. “There’s risk here and no predicting how this will play out.”

In the case of Cuba, the president’s foreign policy gamble also appears to be good local politics. Younger Cuban voters have “increasingly questioned an approach that does more to keep Cuba closed off from an interconnected world,” Obama said.

South Florida’s Latino community is much more diverse than it used to be, and Obama narrowly won the traditionally Republican Cuban American vote there in 2012.

The White House is also less beholden now to Senate Foreign Relations Committee Chairman Robert Menendez, D-N.J. — a Cuban American and longtime critic of the regime who called Wednesday’s move “misguided.” The GOP romp in the midterms means that Menendez will lose his gavel next month.

“My first thought was, ‘Gee, this man has been liberated by losing two houses of Congress,’ ” said Harvard international affairs professor Jorge Dominguez.

The Cuba deal, coming after a series of foreign policy catastrophes in the Middle East this summer, isn’t likely to erase the view of Obama as a president who has had more success making peace than ending U.S. wars. U.S. attack planes and helicopters will likely be dropping bombs in Iraq and Syria well after Obama has left the White House. In Afghanistan, U.S. combat operations have largely drawn to a close, but the levels of violence, civilian casualties and suicide bombings continue to climb.

But, for the moment at least, the president’s historic deal has delighted his supporters and revived hopes that he could still become the transformational global leader that some expected him to be when he first won the White House.

“To be honest, I didn’t think I was going to live to see this day,” said Princeton public policy professor Stanley Katz, whohas made regular trips to Cuba since 1997.

At 1:24 p.m. Wednesday the 80-year-old professor received an email from an academic in Havana describing the explosion of joy there in the hours that followed Obama’s speech.

“The churches’ bells tolled in all of Havana today at noon,” his Cuban friend wrote in the email. “The people are exultant [with] jubilation.”