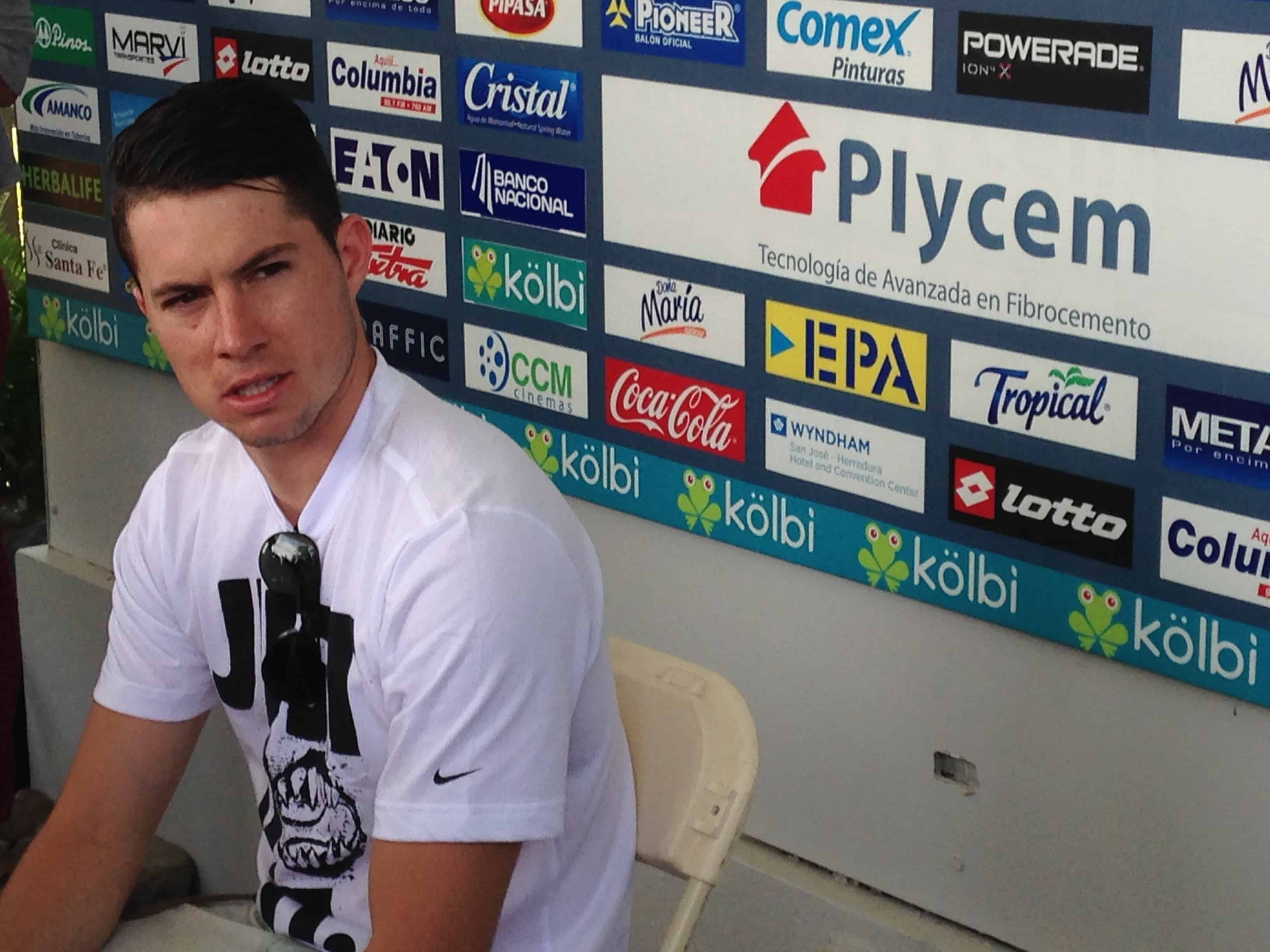 Bryan Oviedo speaks to the media on May 27. (Matt Levin / The Tico Times)

After two weeks of rest, Bryan Oviedo joined Costa Rica’s national team for a light morning training session Tuesday. He never expected the moment to feel so strange. The tease had him reflecting on the moment afterwards.

“Perhaps before I didn’t feel it much,” he said. “But now being here and seeing all of the training, seeing what everyone is doing, it’s giving me a little bit of nostalgia and longing to be in the World Cup.”

The 24-year-old left-back looked free of any lingering effects of the injury that kept him out of the World Cup as he met with the media later that afternoon. But there were other clear signals that he was not yet ready. He wore street clothes instead of the team uniform — and a physical therapist, sent to Costa Rica by his English Premier League club Everton, kept a close watch on everything Oviedo did.

After breaking his tibia and fibula in his left leg during a match with Everton on January 25, Oviedo had four months to recover for the World Cup. For awhile, it seemed like the leg might heal in time. But after trying to practice at full speed at the beginning of May, the pains returned and Oviedo was declared out of the tournament.

The Tico star said he always had the mentality he’d be in Brazil until the doctors finally told “No Bryan, you can’t go.”

He will be missed. Oviedo was Costa Rica’s best defender, and a talent capable of jumpstarting the offense. His absence even will be mourned by his English fans. Oviedo gained a large following abroad after he scored the goal that let Everton beat rival Manchester United for the first time in 21 years.

Everton supporters had joked that Oviedo would single-handedly take down England in the World Cup when Costa Rica was drawn into the same group (England and Costa Rica meet on June 24).

Oviedo figures he’s still at least a month and a half away from returning to the pitch. He hopes to rejoin his Premier League club in the middle of the preseason.

The left-back won’t be traveling with the team to Brazil. But La Sele head coach Jorge Luis Pinto invited him to use the national team’s facilities to rehab when he’s in the country (Oviedo has spent most of his recovery in England). And the defender accepted the opportunity to be close to the national team.

Still, Oviedo wouldn’t say much about the competition to replace him on La Sele, stating it’s “difficult to say names.” He acknowledged Junior Díaz as the veteran presence and Waylon Francis and Heiner Mora as two youngsters on the rise that could challenge Díaz for the starting spot.

Overall he looked pleased to be back, and enjoyed the moments hanging around the team headquarters and joking with teammates. After his press conference ended, he took extra questions in the parking lot and signed an autograph for a fan.

Then he and his Everton physical therapist drove off in a shiny red Camaro — a sign of his prosperous young career and the lucrative future ahead of him if he can recover fully from the injury. But Tuesday his mind seemed stuck on the future he’d be missing out on. That despite his efforts, he would not be among the 23 men from Costa Rica heading to Brazil in two weeks.

“On days when I’m doing intense work I forget a little. But when I see some things that are everywhere now like commercials and other things about the World Cup and when I’m here with the team that gets me sad.” Oviedo said. “But I’m moving forward with my recovery, and that’s what’s most important.”