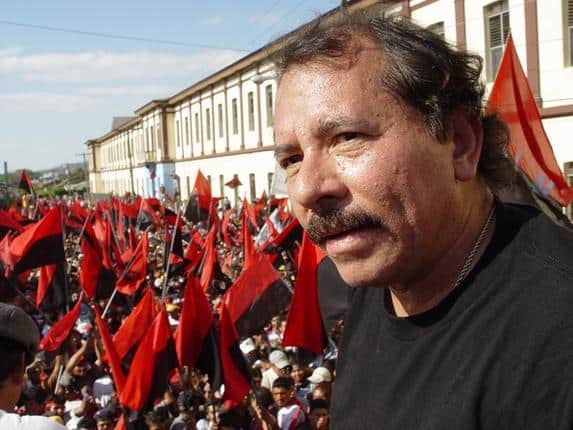 Nicaraguan President Daniel Ortega has been in power since 2007. He plans to run for re-election again in 2016, meaning his presence could be a major headache for Costa Rica's next president. (AFP)

Nicaragua President Daniel Ortega wants to open up a dialogue with Laura Chinchilla’s successor as president of Costa Rica, according to Nicaraguan analysts in a report by the news agency EFE.

Ortega made gestures this week signaling that he wishes to improve the contentious relationship between the two Central American neighbors, once Costa Rica elects its next president on April 6. Johnny Araya, of Chinchilla’s National Liberation Party, will take on Luis Guillermo Solís, of the center-left Citizens Action Party in a runoff.

Chinchilla’s last day in office will be May 8, and Ortega will be pleased to see her go. During Chinchilla’s four years in office, the presidential counterparts have maintained a theatrically adverse relationship. Some of the disputes arose over alleged aggressions from Nicaragua toward Costa Rica. Those allegations are now being tried in an International Court of Justice. Other issues – like the idea that Nicaragua might invade Guanacaste – seem to be more about chest-thumping and braggadocio from both sides.

Chinchilla announced last week that Costa Rica plans to take Nicaragua once more to the world court before her term ends. In this case, the complaint comes after Managua allegedly offered maritime territories in Costa Rican waters to international oil companies for concessions.

“They talk of dialogue and brotherhood, but in reality, on the ground, they continue being hostile, aggressive and arrogant,” Foreign Minister Enrique Castillo said, referring to Costa Rica’s decision to file another case against Nicaragua.

Neither Solís nor Araya wants to appear weak before Ortega’s swaggering up north, but they face a tough dilemma since the Nicaraguan president likely won’t be going away for some time.

They might need to search for ways to compromise with Ortega, whose rule seems to grow more authoritarian each year. The Sandinista revolutionary became president in 2007, and his government continues to tinker with the constitution to allow Ortega to keep running for president. On Monday, constitutional reforms take effect that remove presidential term limits, opening the door for Ortega to become president for life.

According to the analysts in the EFE article, Ortega wants to present a vision of a more united Central America. He desires to form bilateral agreements with neighbors, Costa Rica and Panama. For that to happen, Ortega will need a Costa Rican president who’s willing to play ball with him. Could that be Solís or Araya? Ortega hopes he’ll at least have better luck with one of them than he did Chinchilla, and that’s why he’s reaching out now and alluding to extending an olive branch to the eventual winner.

Jaime Solís, a 54-year-old doctor who worked for the Costa Rican Social Security System, is among the more than 1,200…