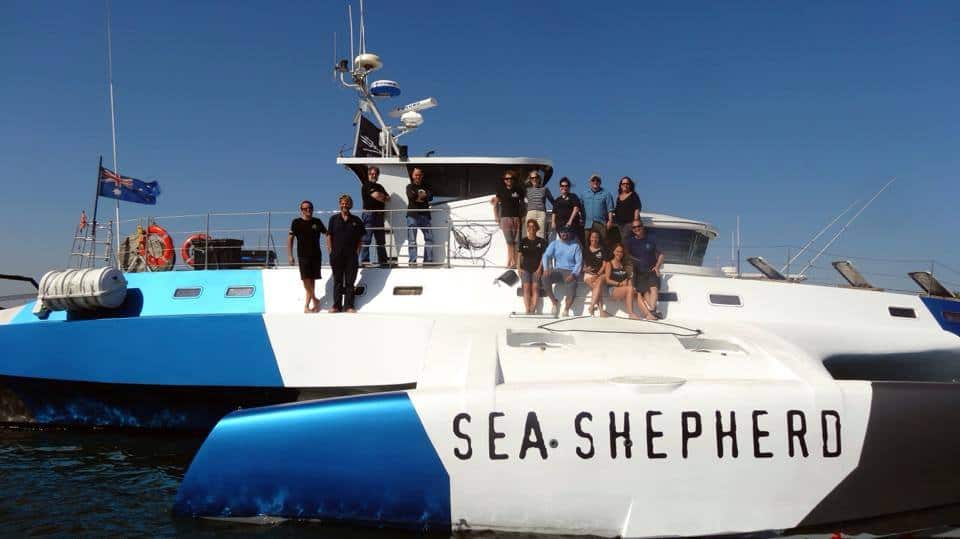 Sea Shepherd negotiators and crew pose on the Brigitte Bardot in port at San José, Guatemala, after a joint patrol agreement was reached with the government. ((Courtesy Water Quest))

Sea Shepherd directors had come to Guatemala to discuss with officials the group’s work in Ecuador’s Galapagos Islands, France and Senegal, among other countries. But they didn’t expect to walk out of the secret meetings with a joint-patrol deal starting immediately.

“We were hoping we might be able to do something with Guatemala, and we were extremely surprised when a representative of the Fisheries Department was excited (about our work) and wanted to get going right away,” Sea Shepherd’s director of intelligence and investigations, Scott West, told The Tico Times.

The joint-patrol agreement is a first for Sea Shepherd in Central America, after a similar arrangement to patrol Costa Rica’s Cocos Island was scrapped 12 years ago in a now-infamous scuffle between the conservation group and a Costa Rican fishing vessel off the Guatemalan coast. Sea Shepherd founder Paul Watson is still fighting Costa Rica’s attempts to extradite him on shipwrecking charges from that incident.

For the next several weeks, the Brigitte Bardot will be based out of Port San José, on Guatemala’s southern Pacific coast in the department of Escuíntla, with eight Sea Shepherd crew on board, along with Guatemalan Naval and police officers.

Guatemala, in its peak marlin season, prohibits the commercialization of the species, but officials have trouble enforcing the law. Sea Shepherd patrols also will work to free sea turtles and other protected wildlife caught on longlines.

“We’re just very, very happy that our desire to protect marine eco-systems through our vessels and crews is being able to come into play here, and that the Fisheries Department in Guatemala appreciates the assistance,” West said.

In the past week, Sea Shepherd also created a Central America volunteer page on Facebook, raising the question if talks with other regional countries might be in the works. West said he could not comment on that issue.

He did say Sea Shepherd was working with local dive shops like the Guatemala City-based Water Quest, which is active in marine conservation in Guatemala, El Salvador and Honduras.

“As a result of this, Sea Shepherd is a growing worldwide movement – it’s no longer just an organization,” West said.

Costa Rica announced 10 new coronavirus-related deaths over the past day for a total of 191, according to official data…