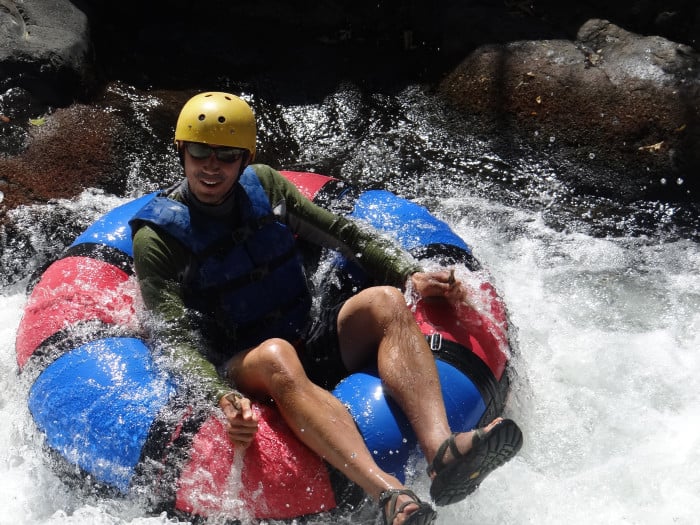 After the invigorating horseback ride, the thrill of whitewater tubing, the first three ziplines and the heart-stopping drop off a bridge over a canyon in a harness, we sit on a ledge contemplating a Tarzan swing and a rock climb and I think: I’m too tired to climb that rock.

But not thinking you can do something, and then doing it, is part of the package when you sign up for Hacienda Guachipelín’s one-day adventure pass — a week’s worth of extreme fun and fright in a single day.

“It’s so peaceful here,” says Erin Blackburn, 33, of Birmingham, Ala., as we stand on a platform waiting for the last zipline of the day, looking down into the rugged canyon, “except for the screams of terror.”

Based just outside Rincón de la Vieja National Park, a half-hour north of Liberia in Costa Rica’s northwestern Guanacaste province, Guachipelín is a working horse and cattle ranch and a first-class hotel. But what really sets it apart is its adventure center, dedicated to delighting, entertaining and scaring the hell out of droves of visitors every day.

In the one-of-a-kind canyoning adventure, thrill-seekers first rappel off a narrow bridge over a river gorge into rushing water 45 feet below. The instructor, Santos Reyes, points out that the rope ends about six feet above the water.

“And you can’t climb back up, so you just have to let go,” he says.

A young woman from Texas goes first, slowly sliding down the rope, looking slightly terrified, until she plunges into the water to applause. Then she has to climb back up some giant staples anchored in the rock — in the middle of a waterfall — and do it again.

A tall Portlander, 35-year-old Wes Wong, swings out comfortably in his harness, plants his feet on the bridge and leaps into the abyss, fast-roping down in seconds and plunging into the water.

“What are you, an Army Ranger?” he is asked.

“Boy Scout,” he says with a laugh.

We do a second rappel of 30 feet, this time to solid ground, and end with a Tarzan swing in which Reyes bashes us repeatedly into a thundering waterfall.

A thrill-seeker on Hacienda Guachipelin’s canopy tour does the Tarzan swing across the Rio Blanco, where a rock climb awaits.

If you thought that was fun, you have to sign up for the one-day pass. For $85 (feel free to haggle for a better rate), you will go horseback riding, spend an hour tubing in whitewater, do a ziplining canopy tour and round out your day with hot springs and a mud bath.

Some 60 to 80 horses here are used at any given time for riding, overseen by some 20 sabaneros — Guancasteco cowboys who also serve as tour guides, in red shirts and cowboy boots. Sorry, 21st century, but there are no cowgirls.

A sabanero named Johnny greets the riders and shows them “the ropes” — pull back to stop, nudge the ribs to go, turn the reins to go left or right, lean back going downhill, lean forward going uphill.

“The horses all speak English, so don’t worry!” he says.

On the 40-minute ride through dry tropical forest, the horses are gentle but feisty enough to break into a trot when another horse tries to pass them.

And now it’s time for whitewater tubing — a one-hour, five-kilometer float down the Río Colorado in individual inner tubes, hitting Class-II and Class-III rapids. This river gorge is so perfect for tubing it seems to have been designed for that purpose by engineers, rather than sculpted that way by rushing water for eons. The river does all the work and you have all the fun.

There’s a thrill when you get sucked into the rapid, often backwards, and then a chill when you get completely soaked in frigid water. Then the sun warms you back up as you float in still water.

It’s somewhat amazing that with all these people spilling over fast little waterfalls, nobody turns over, bashes their head or crushes their fingers. It’s more thrilling than any amusement park ride, and all you have to do is lie flat and hold onto two cords.

(Well, after the first time your tailbone bumps the bottom, you may learn to raise up just a bit as you hit the rapids.)

As we pass the bathrooms on our way back to the bus, someone jokes that we don’t need a bathroom, we already went.

We return to camp too early for lunch, so we cut straight to the canopy tour, which features multiple ziplines of varying lengths and speeds. Like the canyoning, the canopy tour also features rappelling, rock climbing and a Tarzan swing, only this time nobody gets wet.

As we sit waiting for the Tarzan swing, Jordy, the zipline captain some call Spider-Man, swings across the gorge from the other side and stumbles as he hits the platform, appearing to lose his footing on the edge and crying out. We gasp and then he stands up and grins at us. Psych!

Lunch is a succulent, all-you-can-eat buffet on which we all gorge until we’re stuffed. Maybe it’s a good thing we did the canopy first and lunch later.

The day ends with the perfect tonic — a shuttle to the Río Negro termales, where guests soak in bathwater-hot springs, paint themselves in mud with paintbrushes, wash off in cold water and soak again in hot.

Wong, who laughed at himself as he slathered his skin with mud, was debating whether to spend $35 tomorrow for a Guachipelín guide to tour Rincón de la Vieja National Park, where you can see volcanic activity like fumaroles, bubbling mud pots and geysers. You can also take the long hike to the gorgeous La Cangreja waterfall, and you can do either of these with or without a guide.

Though I splurged my first night on a swanky hotel room at Guachipelín — highly recommended, as is the $20 buffet dinner — for my second night I booked a $27.50 tent cabin at nearby El Sol Verde, where Wong also happened to be staying. Run by a charming Dutch couple, this small hotel and campground is a good place to scrimp on lodging and save your money for horsing around, shooting rapids and jumping off cliffs.

Reflecting on the day’s adventures, Wong says, “It’s probably rewarding for the guides to see someone who’s terrified or doesn’t know if they can do it, and then they do it and they really love it.”

By car: Hacienda Guachipelín is located a mile southwest of Rincón de la Vieja National Park and 13 miles (21 km) northeast of Liberia. From Liberia, take the Pan-American Highway north 3 miles (5 km) and turn right at the sign that says Curubandé/Rincón de la Vieja National Park, Las Pailas sector. Drive 10 miles (16 km) to the gate of Hacienda Guachipelín, where all except hotel guests must pay 700 colones to enter. Just ahead, one sign points left toward the national park and one points toward “Recepción”; turn left and you’ll see the adventure center immediately on your left, or to check into the hotel, follow the signs to “Recepción.”

By shuttle: Multiple tour operators throughout the region offer this package, with transportation included. You can also arrange for a hotel shuttle to pick you up in Liberia.

Hours: The national park is closed Mondays, but Guachipelín tours operate daily from 8 a.m. to 5 p.m.