Neo Fauna in Jacó: Saving the world, one snake at a time 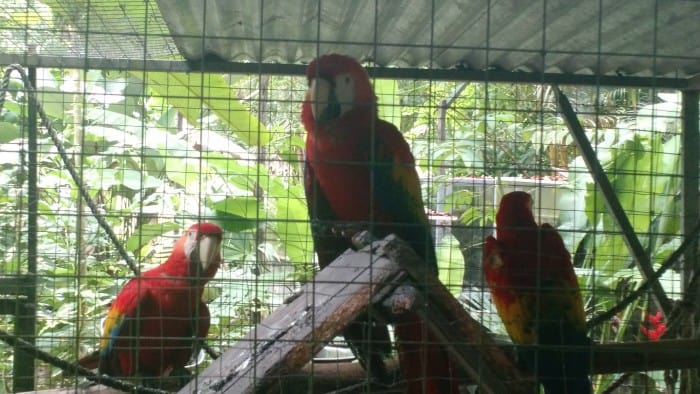 Macaws raised at Neo Fauna have to learn how to fly before they can be released into the wild. (Michael Krumholtz/The Tico Times)

JACÓ, Puntarenas — While we were admiring a curled-up Bothrops asper pit viper, the infamous snake that kills more people than any other in Costa Rica, I noticed a strange-looking fly that had landed on my shirt. But trying to stay in tune with the prevailing pacifism of the wildlife rescue center Neo Fauna in Jacó, I let the bug hang out for a while.

“There’s a bug on your shirt,” tour guide Andrey Jiménez finally said as the small, brown creature with delicate wings remained stuck to me.

When I gently swiped it off, the bug’s wings exploded in the air as if it was shot out of a confetti cannon.

“Oh man, you killed it,” Jiménez said in dead-pan before breaking into a laugh. “No, I knew that would happen. Anytime someone touches that bug it lets go of its wings and falls to the ground safely in order to survive.”

Though Jiménez doesn’t technically work at Neo Fauna anymore, he’s a longtime business partner of owner Luis Angel Fonseca, and says he’s always driven back to the butterfly house and serpentarium here because of his love for the animals.

With support from Jiménez, Fonseca has been able to keep Neo Fauna going for 14 years and has helped save a wide variety of animals along the way. Last week, they rescued a group of sick raccoons from the Los Sueños Resort at Playa Herradura that now remain on the property at Neo Fauna as they get better. And years ago, Fonseca helped rescue a pair of jaguars near the border of Nicaragua after one of their brothers was killed by hunters.

The video below shows the jaguars having lunch at a private farm in Grecia that Fonseca also uses to house and recuperate the animals he is called upon to save.

But feeding the animals and paying for their medicine is a costly venture that receives basically no support from any sector but tourism, he says.

“We do tours to finance this project, because no one else helps us,” Fonseca said. “The government and the Environment Ministry (Minae) disrupt us. Everyone in the government gives us problems.”

Fonseca said all permissions and regulations are up to date and completely legal, but authorities still bother him with paperwork and heavy questioning when he takes an animal in. “As you know, the politicians are in favor of prohibiting rather than supporting,” he said.

So to compensate for the high expenses of caring for needy raccoons, jaguars and snakes, Fonseca charges $20 for a one-hour tour of Neo Fauna, which also offers or collaborates on hiking, waterfall and canopy tours. And all that money ultimately comes back to help care for the animals.

“We need to bring in money to fund our project,” he said. “You have to buy a lot of food, medicine and all that for the animals.”

Fonseca recently rescued a mammoth boa constrictor, endearingly known as “Mama” because she gave birth to 46 babies a few months ago that require a constant diet of rats. When the team at Neo Fauna releases the boas into the wild, they say they’ll need to do it deep in the jungle.

“If you put them too close to towns, people will stupidly kill them if they come across them,” Jiménez said.

When the team goes out to rescue a hurt or misplaced animal, they confirm where that animal is originally from and make sure to return it to that specific environment when the animal is ready. But sometimes, like if a bird comes in with a broken wing, Fonseca has to keep it rather than release it to a certain death.

“Many times we can’t cure them but the hope of ours is always to return the animals to the proper environment,” he said. “Sometimes we are successful, other times we aren’t.”

But if the animals have to stay, they help with Neo Fauna’s tours through the animal sanctuary, which are filled with enough information to keep both animal lovers and casual admirers equally fascinated. For instance, did you know that red poison dart frogs get their venom from a steady diet of fire ants? Or that bullfrogs get their name from the way they pause before charging at their prey?

Jiménez said his motivation as a nature- and animal-lover has always been to teach people what preservation really means. He added that he’s not against cutting trees because there are invasive tree species or those that soak up all the water and leave surrounding plants to die. The point, as he puts it, is to make people be smarter environmentalists.

“The idea behind our tours is for people to learn the importance behind nature and whatever you find there,” he said. “You might find venomous snakes and mean-looking bugs, but you shouldn’t kill them just because you’re the one who’s in their way.”

Getting there: Take Route 34 toward Jacó before exiting west on a paved road toward Pueblo Nuevo. Then follow the marked, wooden signs for Neo Fauna. If you have Waze, the directions will come up under a search for “Neo Fauna CR”.

Cost: Tours of the Neo Fauna wildlife sanctuary are $20.