Manuel Antonio: Zipline and roller coaster, together at last 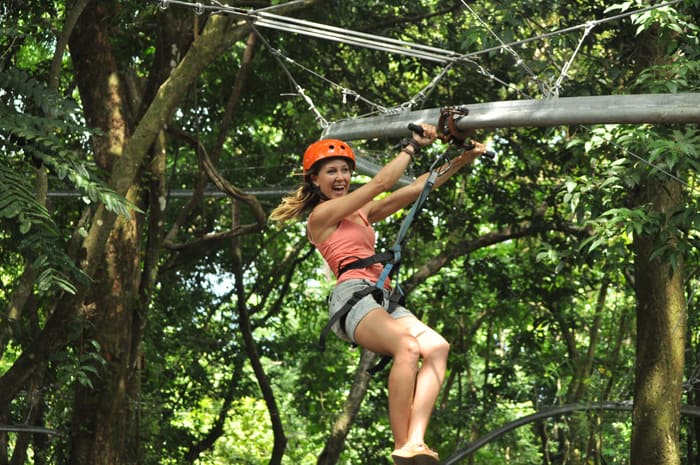 It's a zipline ... it's a roller coaster ... it's both. ((Courtesy of Manuel Antonio Adventure Park))

MANUEL ANTONIO, Puntarenas — I’ve always had a fear of roller coasters from the way my stomach lurches when they plunge toward the ground. Yet I’ve ridden my fair share of these formidable attractions. Maybe it’s the thrill of apprehension or the rush of the fall that keeps me going back for more.

In Manuel Antonio recently, I discovered a unique ride that combines the beauty of flying through the forest on a zipline with the exhilaration of a roller coaster.

El Avatar was invented by Buddy Quattlebaum, who after a series of adventures in the United States and Mexico ended up camped out at a 5,000-acre nature reserve in Kissimee, Florida, called Forever Florida. He had just built two patented inventions for the park: El Avatar, as described, and a tamer combo called the Canopy Bike that featured a bicycle-like contraption with a motor, also on a zipline.

“I wanted to make a zipline bend and curve, since ziplines have become a popular ride,” said Quattlebaum, who worked a long time to create these attractions. “Every engineer I knew told me it was impossible to do what I wanted. It was hard; it took me two years and a lot of prototypes to finally get a real ride.”

Through a high school friend who discovered Quattlebaum and his distinctive rides, Allan Templeton, the owner of Costa Verde Hotel in Manuel Antonio, made his way to Forever Florida and the camper parked next to a swamp filled with 2-foot long alligators. Quattlebaum was already familiar with Costa Rica, having passed this way before. He thought his inventions would work great in the beautiful forests of Manuel Antonio.

The resulting attraction — Manuel Antonio Adventure Park — opened last month on the main road approaching the park, and for ₡6,000, it’s both a thrill and a bargain.

Once I was at the starting platform of El Avatar, I was excited and anxious. I kept asking whether I would feel queasy in my stomach, but the attendants just smiled.

Using El Avatar meant strapping into what looked like the same harness used in a traditional canopy tour, with a helmet, of course. Even though I was clipped with my harness to the piece that links to the track, the big difference here was that I needed to hold a free-swinging metal crossbar instead of the rope and clip I would use in the traditional manner.

Gathering my courage, I jumped off the platform and hung free from the bar. It seemed tame … until the first drop. It was the same free fall that was familiar to me from roller coasters, but, wow, this was so much fun. I screamed on every plunge, and with my feet dangling and my body whooshing around the curves, much of the time I felt like was going to fall off, like I wouldn’t be able to hold on at such speed.

The entire experience lasts one minute and 20 seconds, but it definitely feels longer with its curves and drops braiding through the forest. And of course I wanted to do it again.

But instead, I climbed back up the stairs to the top, where I changed to similar gear needed for the Canopy Bike.  I sat in the chair and was clipped to the top.

Even though there were bicycle pedals, there was no need to use them — the entire cage moved by a motor that I controlled with my handle, much like on a motorcycle. The Canopy Bike was very slow compared to El Avatar, but this gave me a chance to take in the trees and flowers of the forest. The bike trip takes 12 to 15 minutes, depending on how much you stop to look around.

The Canopy Bike was Quattlebaum’s first invention in the ride world. He came to it after developing cavern diving in Mexico’s cenotes, scuba diving through the natural sinkholes formed when a cave roof collapses.

“As the years passed, so many people started doing this, that it became so competitive it was hardly worth doing, so I set out to make something I could patent,” he said. “I studied what people were buying in the adventure park market, and narrowed it down to the Canopy Bike.

“Many people made cable bikes before me. I went about figuring out how to make a bike pass supports, make sharp curves and change cables while still being locked on the cable or track.”

The day I did El Avatar and the Bike Canopy lots of people showed up, forming lines for both attractions. For ₡6,000, you can try both activities, which are a lot of fun for a price that can’t be beat. I’ll definitely be back.

Getting there: The Adventure Park is on the main road between Quepos and Manuel Antonio National Park, just south of El Avión restaurant, and is marked by prominent signs.
Admission: ₡6,000 or $11.50.
For more info: https://www.facebook.com/pages/Canopy-Coaster/943284112361652?fref=ts