Driving in Costa Rica: Do you know the way out of San José? 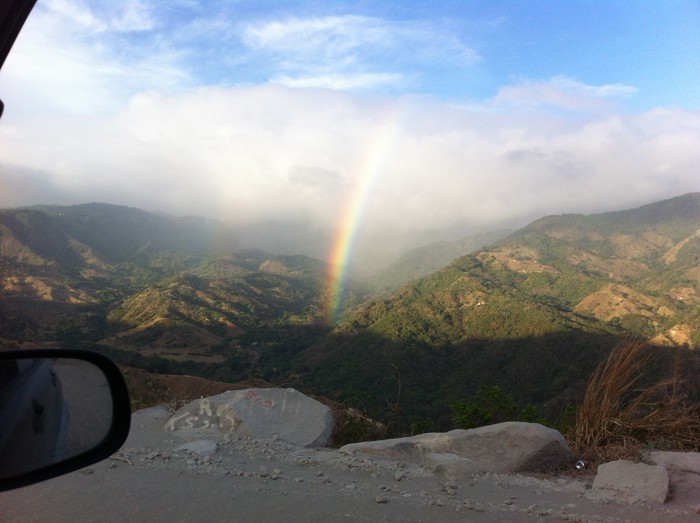 A rainbow on the road to Monteverde. (Karl Kahler/The Tico Times)

SANTA ELENA, Puntarenas — Do one thing every day that scares you, they say.

I have willingly signed up for multiple adventures in this country that require a helmet, a harness, a lifeline and a death waiver. There’s not much I’m afraid of, so I allow myself this one neurosis: I am afraid to drive my own car in San José.

I bought my car in Tamarindo and drove it without incident to Rincón de la Vieja, Tenorio and Arenal. But the first time I drove into San José, I found myself in the right lane of a freeway needing to exit, and I saw just ahead that my exit lane abruptly ended in a “CEDA EL PASO.”

I’m convinced that “CEDA EL PASO” means “STEP ON THE GAS,” so I did — with an 18-wheeler bearing down on me fast in the lane I was supposed to yield to. He repaid me with a long blast on his horn, and I held my hand out the window in a wave meaning, “Sorry, turista!”

Then I had to negotiate my first rotonda — which was terrifying — and I got honked at again and couldn’t even figure out what I did wrong.

I bet I’m one of the few people in San José with a perfectly functional car who takes the bus to work every day.

But today there was no getting around it — I needed to hit the road because I’m a travel writer, and that requires travel. One of the first things I learned in Costa Rica is that the Waze app is simply indispensable for finding your way around. I affectionately pronounce it as I’m told some Ticos do, “Wah-zay,” and I won’t leave home without it.

I studied a map and concluded that to get to Monteverde I needed to take Highway 1 all the way to Rancho Grande, then hang a right. As for how to get out of San José, only Wah-zay knew that.

The Spanish-speaking Waze lady directed me down a street I’ve never been on, which like most streets here is too narrow and gave me visions of colliding with a bus speeding toward me or a car parked on the right. I drove through a school zone as carefully as a drunk driver stuck in a police funeral procession.

I ended up on a fast road with two lanes going in the same direction, all cars going about 70 kph, when a red light loomed ahead — and all the cars in both lanes were blowing right through it!

If I had slammed on the brakes, I’m sure I would have been rear-ended. I sailed through the red light along with everyone else; apparently the others all knew that because of road construction the side road was blocked, so there was no pointing in stopping. Finally I found myself on the safety of Highway 27, with San José behind me. A series of toll booths relieved me of ever-increasing amounts of change. Wah-zay told me I had to drive a whole bunch of kilometers to San Mateo/Orotina before turning.

I consulted my folding map, trying to find this Orotina place. Oh my God — I was on the wrong road! Why didn’t Waze take me to Highway 1?

A sign said it was 34 kilometers to Carara National Park. Maybe I’ll just go there, I thought — I’ve been wanting to anyway.

But as I approached Orotina, I was ordered to turn, and I forced myself to obey. My mantra: Always do what Wah-zay says.

(This got me in trouble once, when it said, “Gira a la derecha” and I turned right onto a one-way street going the wrong way. I made a hasty three-point turn, backing at speed into the left lane, as a car was hurtling toward me in the right. The driver didn’t slow down, but at least he didn’t honk.) After getting off the highway, I pulled over and studied the map again. Wait! I wasn’t on the wrong road after all, in fact I was taking a more direct route. Waze knew the way all along.

Always do what Wah-zay says.

After a nice cruise through the countryside on Highway 131, I found myself on Highway 1, hurtling toward Rancho Grande.

I was almost shocked when I saw a sign saying “Monteverde,” with an arrow pointing to the right. Like the Paul Simon song says, “When something goes right … it’s apt to confuse me, it’s such an unusual sight.”

Before long the pavement ran out, and soon I found myself on a steep uphill, in first gear and in four-wheel-drive. I talked to myself for amusement: “I didn’t know they had mountains in Monteverde.”

The road kept climbing. In places the road blasted into the side of this mountain was completely desolate. In other places I came upon stunning views of the valley below — and the biggest rainbow I’ve ever seen, firmly anchored to the bottom.

Rain spattered the windshield. Huge gusts of wind rocked the car, spinning dust devils in front of me. I felt like I had driven to the edge of the world.

I started having paranoid delusions that I was on the wrong road. This road couldn’t possibly lead to an inhabited place, I thought. Those tourist-looking people passing me in those other 4x4s were probably lost too.

And suddenly, a sign: “Welcome to Monteverde.” I FREAKING MADE IT! My brother, who has lived in Costa Rica for 15 years, drives like a bat of hell — fast, furious and absolutely fearless.

But he says there are two things that are so terrifying to him he would never even think of doing them: leaping out of a perfectly good airplane … and bungee-jumping.

You’re entitled to your fears. I’ll stick with mine.