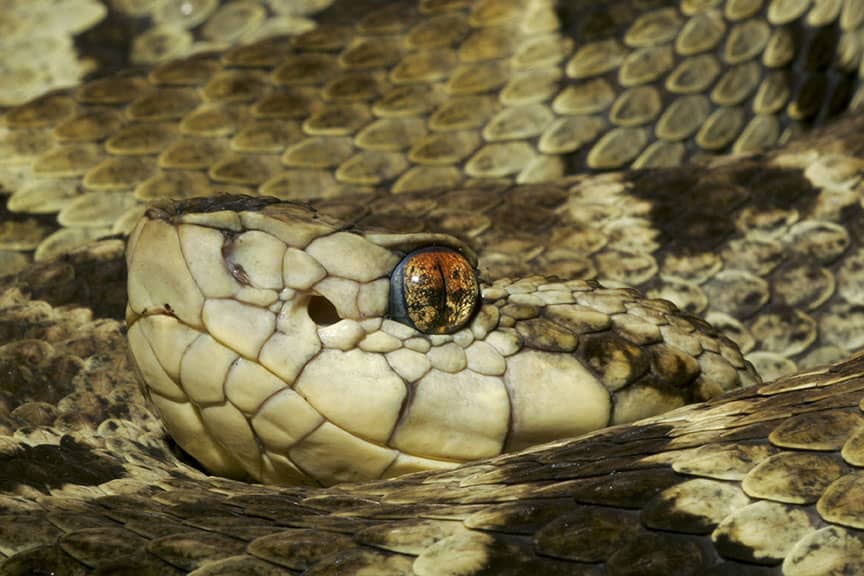 The first time I saw a Fer de Lance I had never heard of it nor did I have any idea how dangerous it was. Luckily the friend I was with did! We were going around Costa Rica photographing birds, monkeys and the like and we were in Carara National Park when we saw it.

It is a species of snake in the family vipers. It is found throughout Southern Mexico, Central America and the northwestern coast of South America

2. Where does a Fer de Lance Live in Costa Rica?

Their preferred habitats include all moist environments located at low to middle elevations up to 2,000 ft (600 m) like tropical rainforests.

The large head is V-shaped like a lance and quite distinguishable from the neck. The eyes are rather large and the head is darker in color on top and a light creamish-yellow on the underside.

Their color and pattern varies, but the basic color is normally shades of brown and dark gray.Light colored stripes outline the dark diamond shapes on the upper body and sides.

Adults are typically between 4 and 6 feet in length . Although uncommon, females have been observed at lengths of 8.2 feet.

5. How much does a Fer de Lance weigh?

6. Does a Fer de Lance have Fangs?

Oh boy do they! The fangs release a strong, fast acting hemotoxic venom.

7. What is the Fer de Lances Latin name?

This snake has been known to be very aggressive.

Ohhh yeah… in fact it is responsible for 99% of all human venomous bites in the entire Amazon Basin.

In captivity it can live more then 20 years.. In the wild well thats up alot of other factors.

The fer-de-lance is often preyed upon by other snakes such as the coral snake and blacktail indigo. It is also a favorite of certain birds of prey like falcons and eagles

13. Is the Fer de Lance endangered?

No, It is not uncommon.

The adults feed on all kinds of small animals including mammals, amphibians, and reptiles. Younger snakes prefer small lizards and invertebrates.

Fer-de-lance specialize in hunting warm blooded prey such as rodents and birds. Its fangs inject hemotoxic venom into its prey, which quickly coagulates the blood and breaks down capillary walls causing internal bleeding and swelling.

16. How Do Fer De Lance Detect their Prey?

To detect their warm blooded prey, these snakes rely on their pit organ located between the eye and nostril. This organ relays thermal information to the snake about the position of their prey

17. What is the Nickname of the Fer de Lance in Costa Rica?

Its Called the Costa Rican landmine.

19. At What Age does Fer de Lance Reproduce?

20. What is the Spanish Name for a Fer de Lance?

The fer-de-lance, known in Spanish as barba amarilla (“yellow chin”)

21. How many eggs does the Fer de Lance lay?

They are brighter colored than their parents, with either beige or yellow tails. They are semi arboreal and actively climb trees, but tend to lose this habit when they become adults.

No they are solitary snakes and prefer to be on their own.

Previous article
Guatemalan Catholics resume processions suspended due to the pandemic
Next article
A Horse and $2.9 Million Dollars at the Costa Rica Border