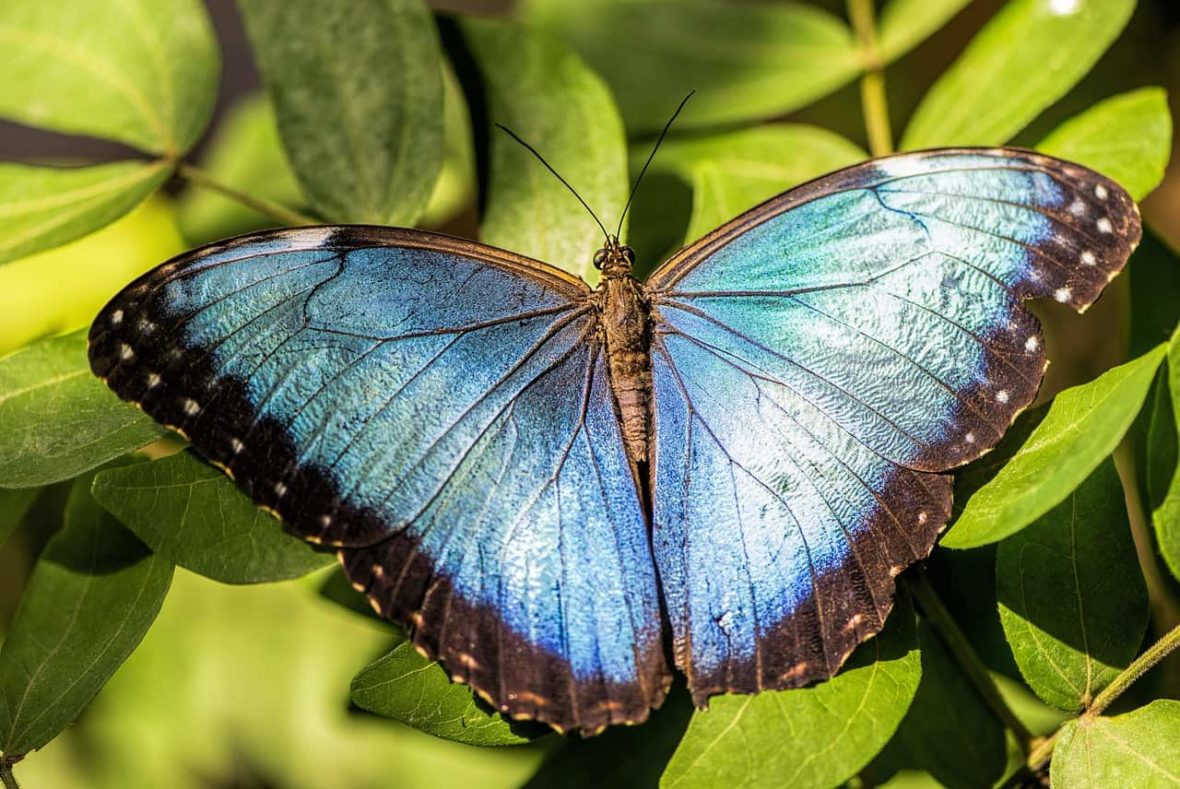 Morpho butterflies are a breed of Neotropical butterfly under the genus Morpho. This genus comprises an average of twenty-nine accepted species and one hundred forty-seven accepted subspecies. The morpho butterflies are mainly found in Mexico, Central America, and South America- Costa Rica, Brazil, and Venezuela.

They have metallic colors, winged with glimmering green and blue spooks, particularly on the upper wing segment. Interestingly, morpho butterflies habitat in the rainforests; a major reason why they are fondly referred to as neotropical butterflies. As much as they are mostly forest dwellers, they go into sunning clearings to get themselves warm. They prefer drinking their food rather than eating it. Their legs carry sensors they deploy to taste; their antenna helps in taste-smelling the air.

The Demand for Morpho Butterflies

The growth of the Costa Rican butterfly business started way more than twenty years ago. By happenstance, Joris Brinckerhoff, a Peace Corps Volunteer, met with a retired entomologist. This retired entomologist, who also identified as an American, gave Joris Brinckerhoff the idea. For so long since he got to Costa Rica, Joris has been on a continuous hunt for a job or business opportunity that would keep him in Costa Rica.

He wanted a job or an opportunity that would enable him to contribute significantly to the economy without inflicting any damage on the environment. Joris read E.F Schumacher, and he was further inspired knowing that the breeding of butterfly pupae for exportation is good and palatable; because it would spawn export incomes.

This butterfly business did not require any highly skilled labor; it did not require any staggering investment. E.F Schumacher inspired Joris to uphold a rationale that insists on the potentialities of small businesses as no nefarious implication to the environment.

Joris began the breeding of morpho butterflies by selling a car in the United States, loans from family, and his Peace Corps allowance. He established the Costa Rica Entomological Supply; the institution made history as the foremost commercial exporter of butterfly pupae in Latin America.

The business did not become an overnight success; it did not blossom instantaneously. Rather, it took time as Joris grew to understand Costa Rica’s slow-moving government bureaucracy. Thus, the first exports took place in the mid-1980s. It is unimaginable how much progress the morpho butterfly exportation has made after its establishment.

This business that was the child brain of an English volunteer some years back has been repeated by other persons and now, estimated at US$ 2 million a year as revenue; an amount that could not have been anticipated when it just began.

In an interview with Sergio Siles, director of the ten companies that are in charge of the exportation of insects, Costa Rican Entomological Supplies (Secsa), he said about Costa Rica Morpho butterflies exportation “It is an activity that has grown a lot in the last decade and that develops with a very particular social model, without large producers and with great respect for nature. It is a sector that well symbolizes much of what Costa Rica is”.

Every month, a staggering rate of nearly 3,000 butterflies is reared in Costa Rica. Sometimes, these morpho butterflies are released into private gardens for beautification and aesthetic appeal. Anabella Gonzalez, another butterfly exporter, said, “We have exported to Russia, Netherland, United Kingdom, Germany, Chile and Austria.”

Morpho butterfly breeding techniques and means in wildlife-exuberant Costa Rica seek to cart in revenues into local communities and also, to protect forest habitats by exporting a ‘herald of aesthetic appeal’ to the other part of the globe.

According to entomologist Ricardo Murillo, over 400 families in Costa Rica make a living from breeding and rearing morpho butterflies for exportation purposes; it is a biodiversity minefield habitat to more than 15,000 species of butterfly and moth.

Captivatingly, it is thrilling to see how butterflies farmers in Costa Rica simultaneously preserve nature and also rake in revenues for themselves. For every problem, nature, in its sheer abundance, is replete with divergent solutions that are helpful, resilient, and brilliant. Beyond exportation, the morpho butterfly breed by farmers in Costa Rica has found a way to influence recent fashion trends.

Fashion designers are now veering towards the aesthetic appeal of nature to produce fashion styles. They are producing fabrics by imitating morpho butterflies. Costa Rica’s morpho butterfly business does not seem to be dwindling anytime soon.

The business potential is glaring to the globe; without doubt, its revenue should take a higher leap in the nearest future. Because of Costa Rica’s morpho butterfly business, aestheticism heightens to the world’s benefit while Costa Rica’s economy gets better.