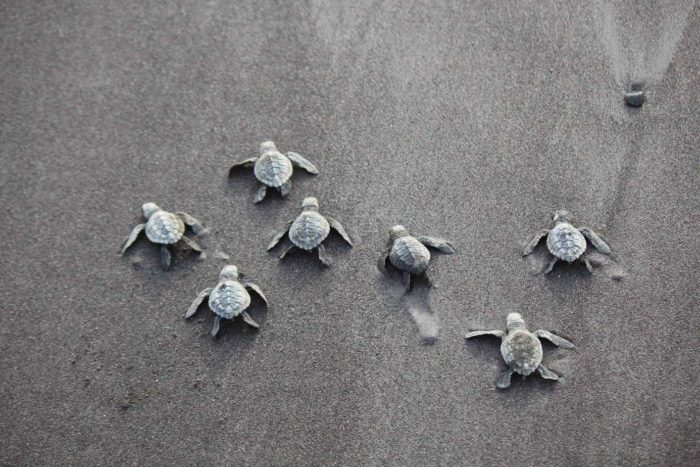 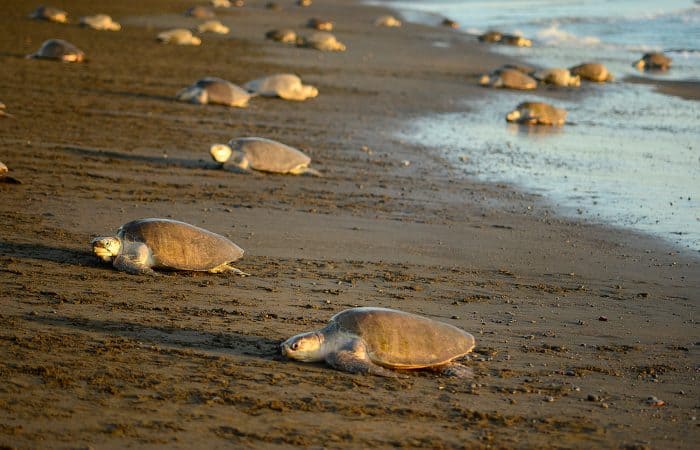 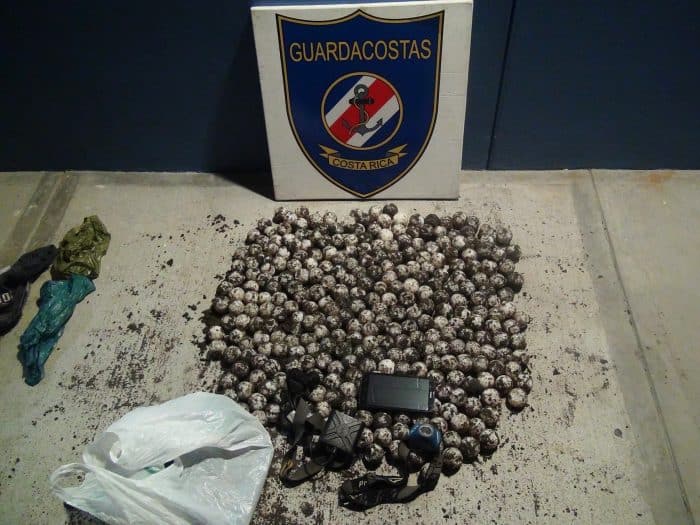 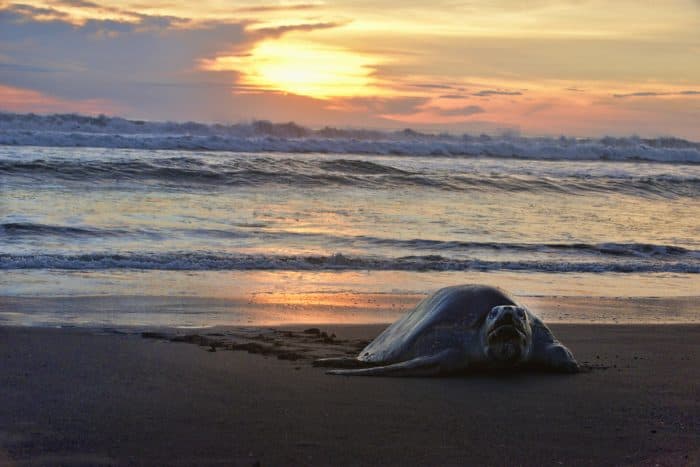 Sea turtles in Costa Rica and where to find them: A brief guide 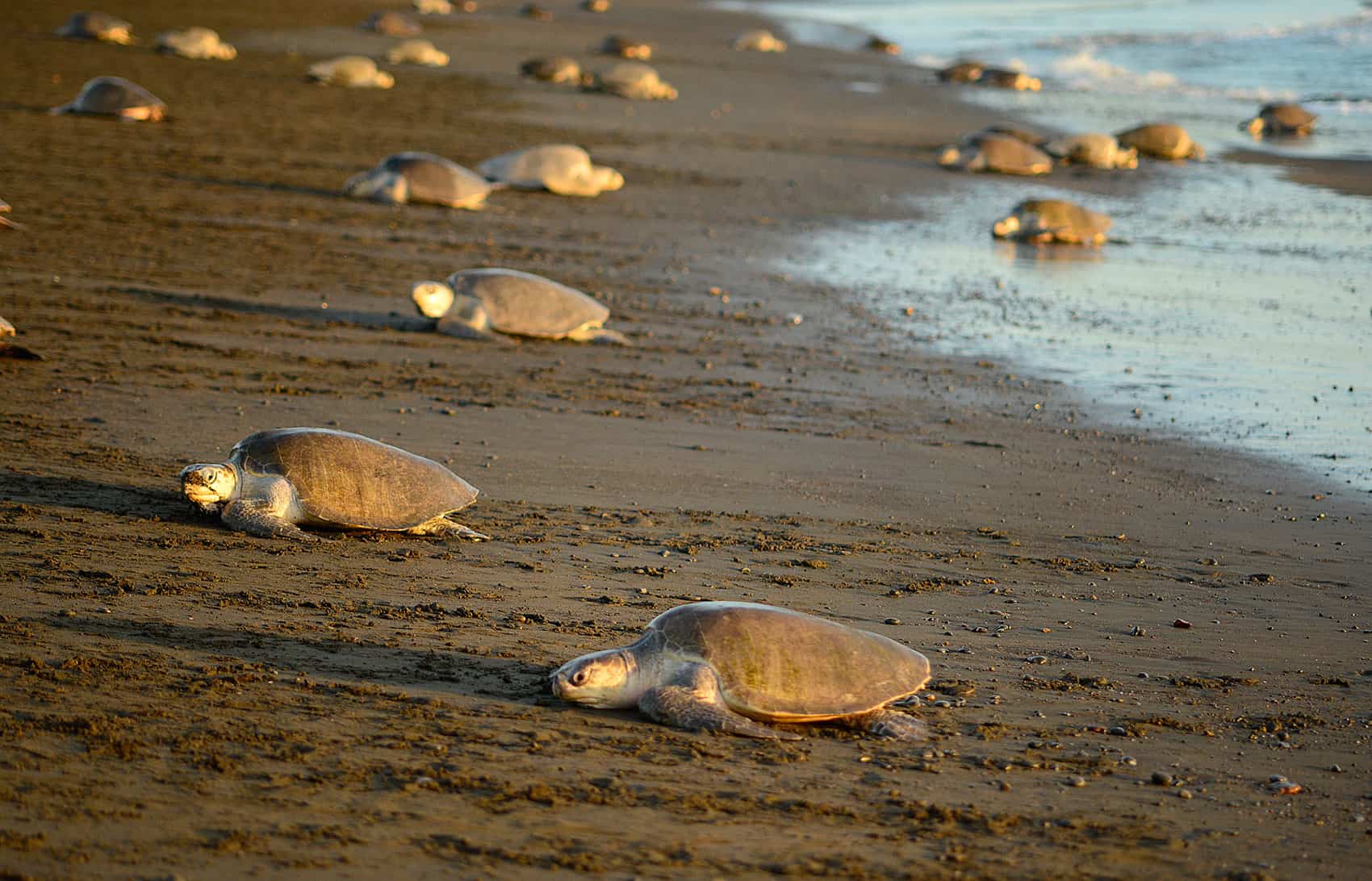 Around the new moon, a great sight usually occurs on the Pacific Coast of the Costa Rican beaches. It’s called the arribadas and is the mass nesting of the Olive Ridley Sea turtles. Thousands of these endangered turtles make their way upon the shore with the help of the tide and wind to nest their eggs in the night.

Even if you are unable to bear witness to the remarkable event of the mass arrivals in the thousands, just the sight of one of them is one to remember.

Turtles on the Pacific Coast

There are several places to see this year-round such as Santa Rosa National Park at Playa Nancite in Guanacaste, which is one of the largest nesting sites in the world and has been declared as a research site.

If visiting you will need a permit provided by the ranger station. Ostional Wildlife Refuge in Guanacaste hosts tens of thousands of the Olive Ridley Sea turtles and offers guided evening tours.

At times, the number of turtles can be unbelievable on the beaches, with them bumping into each other due to the sheer number. Many of these little hatchlings will return here in the future to their original birthplace to lay their own eggs.  Although you may have a chance to experience this year-round the best months are May through October.

Finca Baru Pacifico Wildlife Refuge near Dominical sees the Olive Ridley Sea turtles return to the white sand beach from May to November. This refuge is also commonly known as Haciendo Baru and helps with a nursery to safeguard the hatching of the baby turtles releasing them every year.

In the Nicoya Peninsula, on the northwest coast, Camaronal Refuge attracts the turtles to nest frequently from May to November.  Located near Samara, this refuge was created to protect the turtles providing them a safe zone since 1994.  The Olive Ridley Sea turtles are characterized by their shell which becomes olive green once they are an adult and typically nest one to three times per season.

Turtles on the Caribbean Coast

Along the Caribbean coast, Loggerhead Sea turtles can be found in the region of Tortuguero from May to August. Although this turtle may be grand and large it is the most difficult to witness nesting as it is such a small population.

However, if visiting Tortuguero in search of turtles you will not be disappointed as it is home to three other nesting species of turtles and has been a protected nesting site as of 1970.  The Leatherback turtles arrive from March to May and a small number of Hawksbill turtles are present from March to November.

It is the Green Sea turtle that will have you in awe with its large presence as it is one of the most important nesting sites here for them. Mid-July to October is when you can be stunned by this beautiful endangered species but July and August are when their sightings peak. Nightly tours allow you a chance to see this moving and incredible experience with licensed guides.

The largest of all turtles is the Leatherback turtle which is distinguished with a lack of a shell but instead protected by a leather, rubber-like flexible skin. They can be spotted onshore from October to mid-February on the beach of Playa Grande in Guanacaste.

Las Baulas National Marine Park provides protection for the turtles prohibiting access to the beach in the evening during the turtle season to warrant their safety and not to disrupt these vulnerable sea turtles.

However, as with most of the protected areas, you can explore the beach in the evening with a national guide who is knowledgeable in the shoreline and can ensure the nests are not damaged.

From March to July Gandoca- Manzanillo Wildlife Refuge Leatherback Sea turtles also make their way to the southern Caribbean coastline as they choose to nest on the beaches of both the Caribbean and Pacific. The peak activity can be seen if visiting these beautiful beaches in April and May. By the end of May, the baby hatchlings begin to appear and make their brave journey to the water in hopes of surviving predators.

The Leatherback Sea turtle is the most prevalent to see on these beaches, however, does attract all four species as a nesting center during these months.

Hawksbill turtles are distinguished by their protruding neck and hooked bill similar to that of a hawk with a preference to nest alone. This species is critically endangered and can be difficult to have the chance the see them nesting but if you are looking for the challenge, they favor the Caribbean coast as their nesting zone.

Visit the region of turtles, Tortuguero in hopes of a chance sighting or Cahuita National Park and Gandoca-Manzanillo Wildlife Refuge from May to November with September and October being a more common time for their appearance.

Cahuita National Park is a beach of nesting importance for the Hawkbills turtles conducting projects to access and monitor their activity with volunteer projects as the coral reef and seagrass lagoon have been extremely important for their foraging.

Within the waters of the Golfo Dulce, a small colony resides and has been seen. Occasionally from August to October, they have been spotted on the southern beaches of the Osa Peninsula but do have such limited nesting times

Having the opportunity to witness such a strong and beautiful turtle pulling herself out of the water to lay her unbelievable number of eggs is a time like no other. To experience the sight of a little hatchling with its sheer determination and tiny strength is incredibly moving.

Knowing that these small turtles have survived their incubation period where even the temperature of the sand can affect their growth, avoided being dug up by poachers, and scurried their way across the sands in hopes of not being prey for vultures is truly amazing and emotional.

To see them will have you cheering inside encouraging them while taking away an unforgettable memory for a lifetime.